It was great sadness, Saturday, that I read about the death of standup comic Robert Schimmel.
Schimmel wasn’t the most well-known of comics but that in no way diminishes his talent.  I first saw him on one of Rodney Dangerfield’s young comedian specials back in the 80s.  This was his set from that initial encounter.  (Note, this is most definitely NOT safe for work or children.  The language and verbal imagery is “industrial strength.”)
Later, he had his own HBO special (probably more but I only saw one).  That special featured one of my favorite bits by any comedian, ever.  It kicks in at about the 4-minute mark, when he starts talking about jalapenos.
If you don’t have time to play these videos, let me suggest that you at least start this second one, then press pause to let it load.  Continue reading the post here, then come back and forward to the 3:48 mark.  But really, if you have 15 minutes and some privacy, this is a chance to laugh your head off and appreciate a true comic talent.  Suffice to say, you will never think of Popsicles the same way, ever again.
Award of the Worlds
For some reason beyond my grasp, I’ve ended up with another nod of appreciation in the form of this award, from the Pride of Wisconsin, Christy, and her blog “I’m Just Sayin’”. 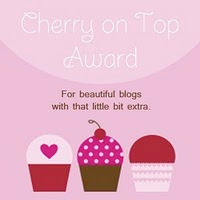 Tina prolly had no idea. Guys are such dumbasses.

No question, Vange. I was a complete dumbass and practically paralyzed with shyness. To me, it was going to be a huge move, just to ask her to skate.

Bluz, thank you so much for this award. We will treasure it as we treasure your friendship. You are such a joy, both as a friend and as a blogging buddy. The story about Tina was priceless. No one tells a story quite like you to the point where we are smiling or laughing out loud as we read it. Skate on!

You're welcome, Cher... you two deserve it.

And I meant to put this in the post... I really don't give a rip if you or any of the awardees go through with the "directions". If you want to, fine, if not, fine. Far be it for me to dictate what you post about. Heck, you just got an award based on doing what you do. Carry on as you see fit!

Thank you so much! I'm still such a newbie in the blogging world and the support means so much to me! You made my Labor Day!

And re the Tina story. Kids at that age are so awkward. I bet Tina really wanted to hang with you and was too shy to tell the other boy no. If that's the one thing you'd change, I think you're in good shape!

p.s. (Almost) happy birthday to us!

Jessica,
I didn't say that was the ONLY thing I'd change... it's just the most entertaining. Perhaps if there's a groundswell of public support, I'll post some of the other similar exercises in early-life do-overs.

And I still can't get over that we have the same birthday!

I'm sure Tina is fat now. Oops, did I just say that out loud? Was I insensitive? OK, sorry, I'm sure today Tina has been re-married over and over and has a collection of kids from a collection of exes. (and she's fat) consider yourself lucky the douchebag reserved ahead or you'd be stuck for life with the dyke from the wrong side (did I say dyke?) oooh I'm so in for it! Nice story though. And I can read when I type. Actually I can read and chew gum when I type. Doncha wish you'd met me at the roller skate place in the 70-80s? Or place was called Cesar's Palace... And we wore fake fur over our skates.

oops! Was that comment too long? Did I overstay the blog welcome wagon?

First, Miss Nikki, no comment is ever too long here. For as long as MY posts sometimes go, I will never complain about comment length. Comments are like the after-party. I want to know what people have to say.

I appreciate the sentiment though. It's always fun to picture those that rejected you all fat and living in a trailer park somewhere. I know it was very satisfying going to my HS reunion and seeing so many of the "beautiful people" all fat, old, and never having left the little town they were from.

In this case, there never could have been anything long term... we moved 200 miles away right after the school year. But if I could have made a move sometime that year, I could have strutted into my new school, all "Hey, I'm the man. I scored me a hot hippie chick at my old school."

I remember the first guy who asked me to skate!!!!!

Okay asshole, now I have like 3 of these awards so I'm totally NOT bitching about THAT (ahem... kinda)

I was like your 9th follower or something! :( and that's ALMOST the beginning! I'm hurt FOREVER...

This PIXIE has been plucked. Do Pixie's have wings or is that just fairies? hmmm

Write a post about the difference between Pixies and Fairies, because if anyone is full of that sort of useless knowledge it's you and I say that with every ounce of love I can muster fucker

Cassandre, you do more good in one day than most people do in their entire lives.

An award from a piss-ant little blog like mine is the least I can do. But it's what I CAN do, so I do it.

You're the best, chickie.

Honestly CB,
You've gotten so many freakin' awards on your site (and as you say, this particular one 3 times), I didn't think you'd even want to deal with one more.

Yes, you were an early "follower", and for that I am thankful. So not to upset the apple cart with a magical pixie like yourself, I'll have keep an eye out for an appropriate award to lay on you. It's not like you don't deserve it.

And Lord knows I wouldn't want to ever be on your bad side...

"Gum-hungry pricks." Priceless shit like this is why I read your blog, you know.

Thanks so much for the award, Bluz! Bachelor Girl's never won anything before! I'm SO EXCITED!!

(And if you think I'm not going to make a big deal about this on B.G., then OMG YOU ARE SO TOTALLY WRONG.)

BG,
You deserve it Girly!

PS. According to Woman:Confused, they're called "airboats". All I know is that they have those big-ass fans on the back. The air is a secondary characteristic, as far as I'm concerned. I thought you all had to take those so you wouldn't get your spike high heels stuck in the swamp on the way to work.

PSS. The "gum-hungry pricks" line is why I picked that particular story to unearth. Glad it worked...

No more POOPSICKLES for me or FUDGESICKLES butt thanks for the visual !!!! Do a post on the book avalanche that's classic BLUZ .....

No need to do the Tina thing over. I'm glad we moved. Why didn't you skate with Joan Jett or marry her or something. Talk about "do over".
So that's where all your allowances went and I thought you were buying Pop-Tarts.

Safe On, Robert Schimmel. I can still laugh when eating a popsickle.

Believe me, after a long night of nachos with jalapenos, round about 2am when the old bung is screaming at me, I’ve pondered the popsicle possibility.

Never acted on it though, lest Pinky start wondering if I had some secrets I wasn’t telling her.

Mary Ann,
While I was spending my allowance on gum at the drug store and dreaming of skating around with Tina, Joan was on the West Coast putting up with untold indignities while trying to start up her band.

YOU GUYS! You are making me feel bad! I could never learn to skate! Oh, I had skates (the ones with the keys), but I have a very poor sense of balance. When we had skating parties, I would put on those cute skates, fall down, then watch everyone else having fun!

The skates with the keys? Didn't they have metal wheels? No wonder you couldn't skate.

We skated on 4 big fat polyurethane wheels on a smooth wooden track. Was easy as pie... at least until you fell. Then you left skin marks on the track. (I was always partial to ice skating, myself. Much more forgiving when you fall.)

Bluz! Thanks for the shout out!

And what an awesome story. Thanks for taking me back to all those awkward 9th grade dances with all the bad hair, horrifying fashions, and Clearasil... where asking a girl to dance was akin to bungee jumping off the Royal Gorge Bridge. Where any angst-riddled delay allowed an open door for some knuckle-dragging Philistine to step in and steal away your crush as the Little River Band plays on in the background.

It's those scars who make us who we are today, Bluz. Wear them with pride.

I loved the first clip at about the 4 minute mark. Great stuff!

God, haven't we all had those *tragic* teen moments? *sigh*

Congrats on the award!

Bagger,
You earned it, buddy!

As they always say, comedy comes from pain. When do you ever hear a funny story about a time when everything went just right?

So I’ve suffered for my art! That’s why I’m bluzdude, not celebrationzdude. I’m going to have to run another one of these Moments of Failure, the one I have in mind is from 2 years earlier, in 7th grade.

Cristy,
Oh, yeah, the sigmoidoscopy stuff... "We're looking for blood in your stool." "Well, I didn't go to med school but if you use 'that' thing I can make a prediction right now."

I loved it right from the beginning, about how you shouldn't screw your pets.

To sad about the death, i thought he was a funny guy at times. Nice post the comments were killing me.
MR MONKEY

Thanks Mr. Monkey... we get a pretty lively crowd here sometimes!