In the previous post, I took the title from a line of dialogue from the Eddie Murphy concert film, “Delirious.”  This was huge back when I was in college (or shortly after I got out.)  So in comments, I was explaining to Cassie, my favorite chronologically challenged mother, what it all meant.
I explained that it came from Murphy’s bit where he was impersonating various singers.  He was talking about how Michael Jackson would get all sensitive on the ladies, and cry if he wasn’t getting through.  He then did a spot on impression of MJ singing “She’s Out of My Life,” before dissolving into tears and saying, “Tito, get me some tissues… Jermaine, stop teasing.”
I loved this bit, but even more, I loved the bit that followed, when he did an extended impression of James Brown.  He just killed it and it eventually gave birth to one of my favorite SNL sketches, “James Brown’s Celebrity Hot Tub.”
When I was making the response comment, I went to YouTube to look up the MJ clip, so I could reference it.  But afterward, I just had to play the James Brown bit.  Still kills me, I swear.
Now, to the reason I’m explaining all this…  On the way to work this morning, what should appear on my MP-3 player?  Eddie Murphy’s James Brown bit.  I laughed all the way to the subway.  Then on the way home?  James Brown’s Living in America came on.  How does it know?  Spooky.
Office Steeler Rebels-Update
Remember how I have my workplace Steelers Underground Fan Club?  We had a pre-game pizza dinner in the top floor boardroom.  Thirteen of us got together for a little pizza, a little Steelers fellowship and a lot of joking on the Ratbird fans.  It was so much fun to see the other Execs wander by, look in, and just shake their head. 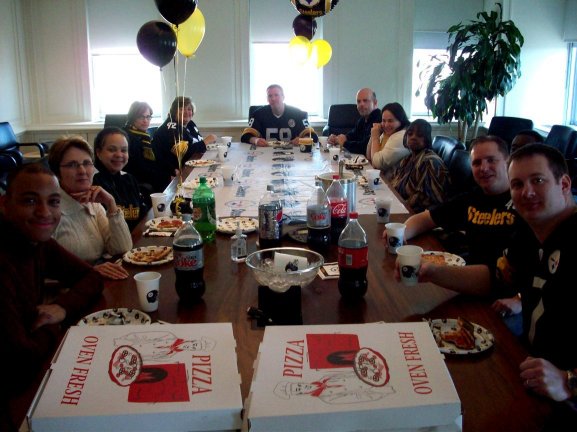 One of our group sent around an email detailing the staggering number of incidences of the number “7” surrounding this Steelers post season:
“Number 7 (Ben), playing in his 7th year, going after the 7th Steelers Super Bowl, just racked up his 7th win in his last 7 starts against the Ravens, winning by 7 points. The Steelers have won 7 AFC Championship games and lost 7 since the AFL-NFL merger of 19"7"0. After the seventies dynasty, beginning with the 1980 season, the Jets game will be the 7th AFC Championship game hosted by the Steelers, in their 77th season.
And if they win we'll be in seventh heaven.” 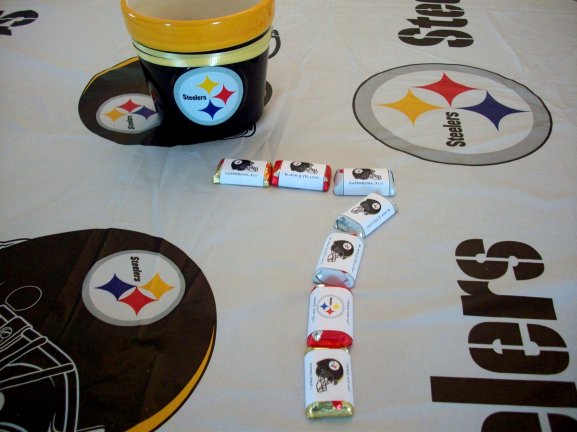 One of our members outdid herself by not only bringing Steelers plates, cups and balloons, but chocolates!
And if that’s not enough, Sunday would be the birthday of Steelers beloved radio announcer, the late Myron Cope.   We have way too much going for us to lose this game, right?  Right?
More Stillers Laughs
My dad emailed me this joke… it’s been around for some time, but the beauty is that you can fill in any group you want.  Anyway, it cracked me up, so I thought I’d share:
A Pittsburgh Steelers Fan is drinking in a New York bar when he gets a call on his cell phone. He hangs up, grinning from ear to ear, and orders a round of drinks for everybody in the bar, announcing his wife has produced a typical Steeler baby boy weighing 25 pounds.
Nobody can believe that any new baby can weigh in at 25 pounds, but the Steeler Fan just shrugs, "That's about average back home, folks, like I said, my boy's a typical Pittsburgh baby boy."

Congratulations showered him from all around, along with many exclamations of "WOW!" One woman actually fainted due to sympathy pains.

Two weeks later, he returns to the bar.
The bartender says, "Say, you're the father of that typical Pittsburgh baby that weighed 25 pounds at birth. Everybody's been making bets about how big he'd be in two weeks.  So how much does he weigh now?"

The proud father answers, "Seventeen  pounds."
The bartender is puzzled, concerned, and a little suspicious.
"What happened? He already weighed 25 pounds the day he was born!"

The Pittsburgh father takes a slow swig from his Iron City Light beer, wipes his lips on his shirt sleeve, leans into the bartender and proudly says,

"...Had him circumcised."
To go out with a bang, my dad also sent me a new Steelers song.  I swear, every year there must be at least a dozen new Steelers songs released.  Many are pretty crappy, but I really liked this one.  Check it out.  Any song that makes fun of the Ratbirds is OK with me!
Posted by bluzdude at 7:53 PM

Trash,
The Cowboys fans will never shut up. Luckily, who cares what losers have to say?

Bluz, this post was so funny I hardly know where to begin. So you had a bit of James Brown serendipity, you did! Do you "feel good...."?
You luncheon looked awesome and your Dad's joke had me in stitches! Great Steelers video too. I can tell you're psyched! I went grocery shopping this morning for game day. The line was ten-deep but I didn't care. We all have our Steeler traditions. Wave those Terrible Towels!

Bluz, that brought back some wonderful SNL memories!

So the Pittsburgh kid grows up and gets a spot on the Steelers team. In the very first game, he pulls his back and ends up on the bench for a couple of weeks. Each week finds him sitting there with his girlfriend next to him. One of the players asks he how he got permission to have her sitting there. He tells the guy it's in case he has to go to the bathroom. The player asks if she even goes with him to take a leak, and the guy says, "Absolutely! I'm not supposed to lift anything heavy!"
your hot Arizona auntie!

Cher,
I almost called this post, "I Feel Good! Hiiiiiiiagh!"

Glad you liked. Just got back myself, from some shopping errands. Had a good laugh at all the "Go Purple" displays and end caps. Ought to be on clearance any day now.

Mrs Bachelor Girl,
I have no idea where our girl got those chocolates, but it was the Hershey's assortment... milk chocolate, dark chocolate, Mr. Goodbar, and that Krispy one whose name I can't think of. Yummy. The pizza rocked too!

Judie the H.A.A.,
Dick jokes never stop being funny. I use one favorite in real life, whenever anyone is talking, in a bar, or online, about being "hung."

Once I get their reaction, either questioning, or pity, I slyly continue, "8 pounds, 7 ounces."

Bluz, that's "bada boom!"
I remember the first time my mother saw Joey without a diaper when he was an infant. "He sure is hung!" she said. I was shocked! I didn't know my mother knew that word!

Mothers know all the words, they just don't always let on.

I'm far more challenged than what you give me credit for. But thanks :)

And Ohemgee, I just read this and almost peed my pants from laughing: http://www.miamiherald.com/2009/02/11/v-print/427603/dave-barry-a-journey-into-my-colon.html

I'm sure you've read it, but seriously, funny. YES!

(Plus it's my gentle nursing way to make sure you're taking care of yourself, mainly your butt. I do it out of love.)

Cassie,
An excerpt of that column has been running around the internet, via email, for years now and honestly, it's one of the funniest things I've ever read. "Fire hydrant mode." OMG.

Thank you for caring so much about my ass. I haven't had the full colonoscopy (yet) but I did have the prostate exam during my last physical.

I tell you... the best thing about female doctors? Small fingers.

Bluz!!! You know me so well! It is our destiny to be together for eternity! OR NOT!!

Lots of good entertainment today, Bluz. Thanks for the laughs. I especially loved Eddie Murphy's bit. I discovered him in high school and he still cracks me up.

Raven,
I just wish I could find a clip of Eddie doing James Brown Celebrity Hot Tub on SNL. The network must have the SNL stuff taken down.

Plus, female doctors are kinder. Us women had many of fingers shoved in places (pregnancy or NOT) and I will tell you, while I'm heterosexual, my dainty OB's fingers are far preferred.

(See, doesn't that make you feel better about talking about bending over and coughing? I'll embarrass myself for you!)

Cassie,
I very much appreciated my tiny little lady doctor. That's how I judge doctors now... no more gnarly old guys with their big-knuckled sausage fingers.

I cracked up when I read that last title. I love Delirious! I watch it at least once a month. I have a tendency to quote it a lot, and it makes me happy when someone gets it.

Gina,
I knew there had to be some devotees of 80s comedy around!

Gina,
“Why’d you eat the ice cream off the floor?”
I loved the shoe-throwing mother bit.

Oh, and Aunt Bunny falling down the stairs…

I need to own that Eddie Murphy show, man. God, I was laughing out loud at that s**t. And, he makes me cuss. :)

Cristy,
Delirious is readily available on DVD on Amazon, at WalMart, or pretty much anywhere. Under $10, too. It's totally worth having.

Or, you could just keep clicking on the YouTube videos... I bet the whole show is out there, 6 minutes at a time.