As I mentioned this weekend, my friend Sitcom Kelly (and her badass Steelers-manicured fingernails) was at the AFC Championship Game in Pittsburgh.  Turns out she had some pretty good seats… Row G, lower bowl, closed end zone.
Throughout the game, I sent her text messages to update her on the temperature, and regarding anything that was mentioned on TV but not apparent from the stands.  Obviously, I told her she needn’t text me back, given the difficulty it would cause to keep putting gloves on and off.  Also, I wouldn’t want her to chip the badass manicure.
I talked to her today and she mentioned that she hoped it would stay presentable for the Super Bowl.  I told her that she could always touch it up with white-out and a Sharpie.
One of the features they had for the game was that the Steelers took a panoramic picture of the entire stadium.  They then published the pic on their website so people could scan around, zoom in and find themselves in the crowd.  It took me a while, and some considerable direction from her, but I finally found her: 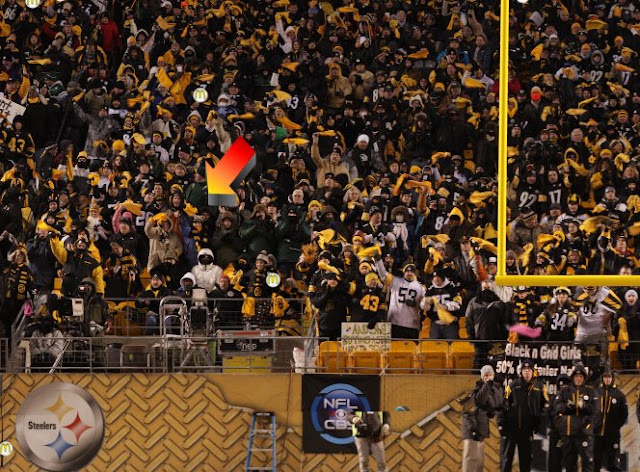 You could see she had some nice close-up seats.  I considered not putting in the arrow, because she’s pretty conspicuous, being the only one wearing a blue coat, in a sea of black and gold. 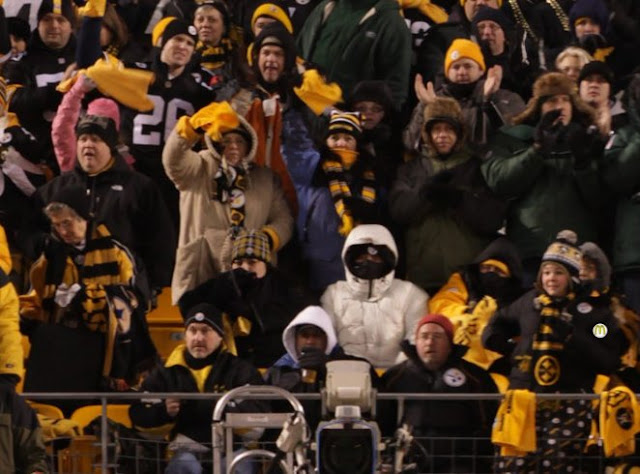 Zoomed in, you can see Sitcom Kelly, and her Sitcom Mom to the left.  And I think that’s Family Guy on Mom’s other side.
Sitcom Kelly took a bunch of pictures of her own and promised to send me some.  I’ll run them here if they turn out to be more that just shots of her beer and food.
This was Sitcom Kelly’s first trip to Heinz Field for a game and she was genuinely impressed with the facility and atmosphere.  Certainly was a big game to start out with, huh?
When she got back, she told me, “I gotta get those season tickets!”  (She’s on the waiting list.)  “I wanna go to some more of these!  Only maybe in October, so I don’t have to walk around like the Michelin Man, under 6 layers of clothing.”
And show off the badass manicure.
She considered getting a face-paint logo but figured that it would end up smearing and looking more like the eye-black the players wear.
She got the same effect anyway, once the wind made her eyes water and mascara run.
I don’t think that look will help lure any unsuspecting ballplayers back to The Pit.
Getting The Goods
I am all about getting good swag.
Since the Steelers win on Sunday, I’ve been getting inundated with offers from various retailers to buy AFC Champions apparel and Super Bowl XLV stuff.
I never, ever buy Championship Game apparel.  And I never buy Super Bowl apparel until after the Super Bowl.  It’s a total sucker-bet, if you ask me.
If your team happens to lose the Super Bowl, your Championship Game stuff becomes a painful reminder of that which you long to forget.  It’s the same with the regular Super Bowl stuff.  It’s only cool if you win.  And if you DO win, you want the Super Bowl Champions apparel, and it makes the Conference Championship gear pretty much irrelevant.
I know from which I speak.  The Steelers have only lost one Super Bowl, but my brother and dad were there.  They brought me back a hat and a pin, for which I was grateful.  And I already had the AFC Champions hat.  But given that they lost, and recalling the painful manner in which it happened, I could never bring myself to wear any of it.
I much prefer to pretend that game never happened.
I put in to take off work on the Monday after the Super Bowl.  I figure, either way, I won’t be fit to work.  If they win, I’ll either be entirely too partied out and will spend the day online furiously buying Super Bowl Champions swag.  The biggest down side to that is that all my “6-Time Super Bowl Champions” stuff will be obsolete and I’ll have to restock with “7-Time Super Bowl Champions” stuff.  I hate being out of date.
If we lose, however, I’ll be heading for the Bay Bridge, with plans to hurl myself into the Chesapeake.
Perhaps I can get some Ratbird fans to join me.
Posted by bluzdude at 7:24 PM

A day or two after the Steelers won SB XLIII, I saw some guy at a local McD's wearing one of those fancy leather jackets with the five SBs on them. I sympathetically nodded my head in his direction, but did not have the guts to ask if he planned to upgrade.

I am with you about waiting, but when the Steelers were going to XL, I was one of those people who bought several tees, a car decal, etc; I was just so excited. I realized the error (i.e., $$$) of my ways as I was buying a bunch more stuff after the SB.

Take as many Ratbirds with you as you can. lol

Facie,
SBXL... that was really exciting to experience, especially after that unbelievable playoff run. I wanted to buy everything I saw. At least I was able to hold off until we won the thing.

I have one of those Steeler 4-Time Champs "letterman" jackets, but the 4-Time stuff is subtle, just a patch on one arm. I update it by applying lapel pins to the area.

But I tell you, after SBXL, I dropped a TON of cash on Champs swag, because it was so long since the last one. Same with after the Pens Cup in 2009. That was another long gap between titles.

It took me a while, but I finally figured out where her head was. I am looking forward to the big day, even though I will probably be sockless. I may come up with a Steelers jersey, though.
your hot Arizona auntie

Judie,
Yeah, at first I couldn't tell if that was Kelly, or "Kenny" from South Park.

I think that IS Peter Griffin. Awesome.

We were watching the game at home in Louisiana and I still got so cold watching it that I had to go get a blanket. Brrrr.

I am so glad I am not the only one who is anti AFC Champs gear until the big game is over. It's just a stepping stone. It's not the title we want.

Imagine going to Dallas where they are offering parking spaces for $900! Or maybe that's just for Packer fans. They are that stupid.

Jessica,
He was a Jets fan, too. Just sayin’…

I think the last texted temperature update I sent her was 8 degrees, wind chill of -1. Although I became vaguely aware that I might be doing her psyche more harm than good.

DJ,
Exactly! Maybe if it was the Detroit Lions or someone that rarely goes anywhere in the playoffs, it would be worth commemorating, but we Steeler fans have higher standards. Or are spoiled rotten… whatever.

Bagger,
For $900, they better park my car, provide and pour my beer, carry me to the game on a rickshaw and give me a “happy ending.” (Meaning ensure the Steelers win, of course.)

Re the Packers fans? Spoken like a true Bears fan.

Tom hates football. That is all. :)

Yinz are just pissed that your 'Boys won't be there to defend their turf.

I must say, I'm pretty amped about this Super Bowl. At least I have all that black stuff left over from last year. Now that's what I call convenient!

Mrs. Bachelor Girl,
That's VERY convenient, for the non-football fan. And black is so slimming, too!

I'd love to know what that sign up front says? "Black n Grid Girls"? I swear it doesn't say "gold". I'm sure whatever it is, it's awful.

Ooops, random question mark. I hate when that happens.

Sure looks to me like it says that. Go figure. Maybe there's something in the way.