Steelers-Ravens Monday at the Office

I thought I’d put up a quick post about everything that happened at the office today, as this triumphant Steeler fan returned to work amidst all the Ratbird fans.
Here’s what happened:
(crickets…)
Nada.  Nothing.  Not a peep.  No purple in sight, no Ratbird fans that want to discuss the game.  Well, my boss wanted to talk about the game, and he is a Rats fan, but he is actually pretty reasonable about it.  And he actually likes the Steelers and will root for them once the Ratbirds are done.  And one other guy came by to congratulate me (as if I'd done anything).
So, not being one to take being ignored, I decided I needed to stir the pot a bit.  So I decorated. 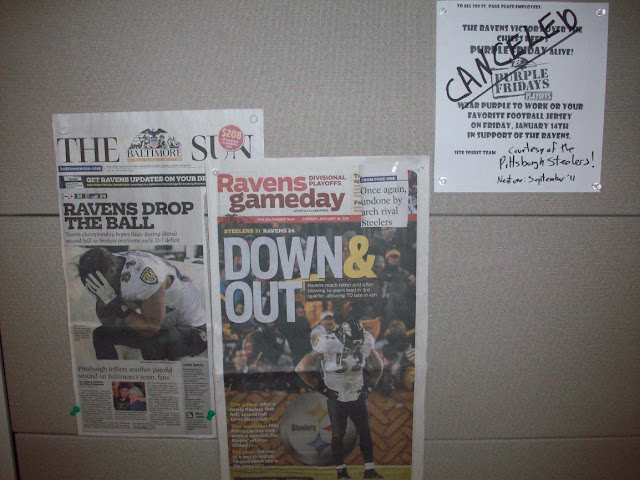 The outside of my cube, decorated with Sunday’s front page and sports page from Baltimore Sun.  Also, at the upper right, there’s last week’s notice for Purple Friday… which I took the opportunity to revoke for the rest of the year.
But don’t think I’m totally heartless.  I’m actually worried about the well being of the Rattie fans, so I decided to create a Therapy Station. 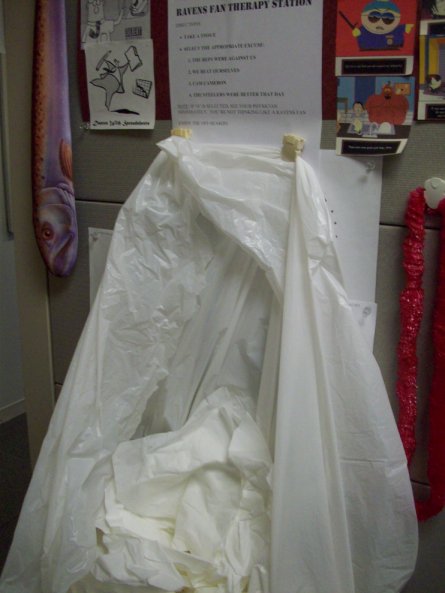 Don’t ask how I came to have a garbage bag full of tissues.
This is a close-up of the sign. 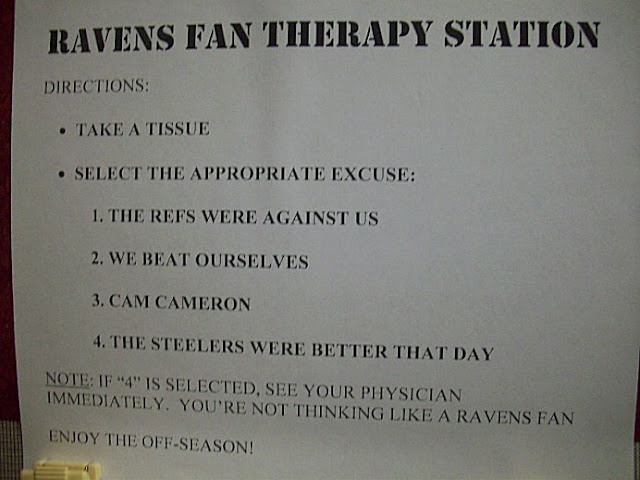 See?  I care about their needs!
I also had the opportunity to peruse some of the Baltimore Sun’s blogs and the commenters are seriously losing their minds.  The biggest bone of contention was the holding penalty that negated the Rats’ long punt return for a touchdown.  Everyone was screaming about the “bad call,” complete with allegations of conspiracy and favoritism.
But on the Pittsburgh Post-Gazette’s blog by former columnist Bob Smizik, a commenter posted this picture from that punt return: 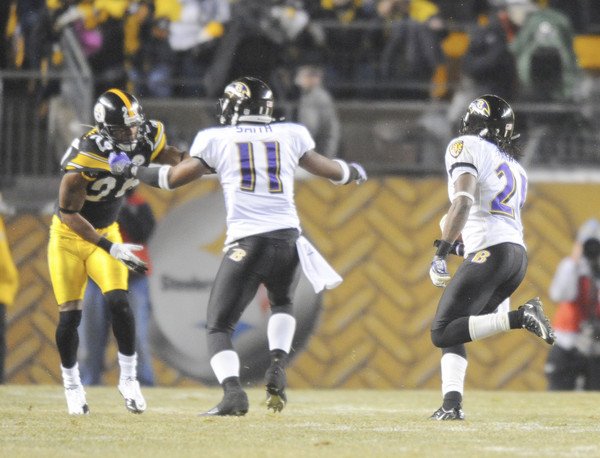 That, my friends, is holding.  Case closed.
I seriously hope the Steelers now go on to beat the Jets and play in the Super Bowl.  But if they don’t, I can live with it.  Because regardless of what happens, I’m safe in the knowledge that they put the Ratbirds out of business for the 2nd time in 3 years.
And as you know, Two Out of Three Ain’t Bad.
Posted by bluzdude at 7:15 PM

I so agree. I heard nothing today in my office from all the Cowboys fans. All they said was "good game" which is true.

It certainly was... stressful as all get-out, but good.

You are terrible Baron Bluz....

The Queen bows to your awesomeness.

On to the JETSS. O Happy Sunday.
So the Doctor is In on foobah counselling. Green Bay really had such a service for many companies, no shit.
My advice: Get A Life.

Mary Ann and Facie,
Just as long as I didn't go too far...

Eh, no such thing.

You forgot reason excuse 5: We may look all cool in black and purple, but down deep, we're still the Cleveland Browns!

Bagger,
They hate to acknowledge that fact. They're always trying to counter our 6 Super Bowls by claiming they've only been around since 1996, but we know the real truth. They're still the same team that was the Cleveland Browns. Only thing they changed was the city and the laundry. Same coaches, same players, same front office... all slowly evolved into the team they have now. (Just like every other team.)

You don't get to change history just by claiming it only goes back a few years.

That...was..hilarious! I loved the Therapy Station and the cancelled Purple Friday notice. Very thoughtful of you.

By the way, I've already had to say, "The Steelers are just plain awesome, bite me" as you suggested. May have tossed something in about Troy Polamalu being "easy on the eyes," too.

It's gonna be a long week. But for me, the real stress is tomorrow night--Penguins versus Red Wings. My weekend plans depend on the outcome!

What a fun co-worker you must be! Well, if you're a Stealers fan anyway...

No. You didn't go too far but you went pretty fast.
Now, think Lucky # 7!
And may our Baby Birds beat the Big Bad Olde RedWings! Then we can get down to Bowl bidniss.

No longer ANONYMOUS, I laud your concern for Rattie fandom. But where DID you get all those tissues???
(You have probably been collecting them since you were 12).

HA! The Therapy Station is genius.

You sure like to stir the pot don't you? Love the Ratbird's therapy station!

Personally, I think you are lucky to still be alive. Your winning personality and graciousness saved you, I'm sure.
your hot Arizona auntie

Your creativity never ceases to amaze me. The tissues in a bag at the Therapy Station: Brilliant! Only you, Bluz, only you... :)

Jessica,
That opinion varies, I’m sure. I’m not exactly Mr. Popular this week. But I feel like people expect me to come up with something, so I try not to disappoint.

Anonymous Dad,
The “Big Games” just keep on lining up. Pens/Wings should be a good test.

Mary Ann,
OK, here’s where the tissues came from. In September, our company had a team building “Minute to Win It” competition for the execs, where they competed in a series of simple, yet tricky events. One of the simpler ones was a race to see who could pull all the tissues out of a box, first. Obviously, that left a huge pile of tissues laying around.

Our department, who also set up the event, is instrumental in driving the company’s “Green” efforts. So I mentioned to one of them, “I hope you’re not planning on tossing all those perfectly good tissues…” Next day, he showed up at my cube with a trash bag filled with tissues. I’ve been taking out a dozen or so at a time and putting them into my tissue box on my desk. I hate to waste!

So when the Steelers won on Saturday, it occurred to me that it would make a nice visual for my Ravens Therapy Station.

Mrs Bachelor Girl, Cher and Raven, (who is definitely NOT a Ratbird)
Thanks… I was pretty proud of that, myself. Pot-stirring is one of my favorite things, in offices, kitchens or otherwise.

Judie,
I’m safe in the office. If I had the Therapy Station out on the street, however, it would be another story. I feel exposed enough just crossing the street in my Steelers hat. And it’s not like I could go to the cops. They’d probably give me the nightstick treatment themselves.

Dad
Yay! No more “Anonymous Dad”!
FYI, my boss’s boss took down the “Purple Friday” sign, as “inappropriate use of a company sign.”

No prob. The point was made.

I noticed you all haven't been talking on this site much since 2011....everything OK? How are the "Ratbirds"?

Just because your Google search landed on a post from last year, it doesn’t mean I haven’t written about them since. But I wouldn’t expect a Ratbird troll to actually know what he’s talking about… not when he can just drop some random shit in an old post and fly away…

Congrats on beating our JV team.