"Our Father, With Art in Pittsburgh, Football be Thy Game, Let Mendenhall Run, 6 Superbowls Won, On Earth as it is in Heinz Field. Give Us this Day a Playoff Win, and Forgive Us Our Penalties, as We Defeat Those who Playoff Against Us. But Lead Us into a Victory, and Deliver Us to Texas. For Thine is the D-Line, the Polamalu, and the Harrison... A-Ben."
(Author unknown… it was on an email that went around.  And I tweaked it a bit myself.)
Yes, it’s another football post.  But truthfully, it’s not really about the football, it’s about all the stuff surrounding it.
I’m really nervous about this game.  At 4:30 today, the Steelers play their hated rivals, the Baltimore Ratbirds.  I despise this team, and I’ve previously documented the many specific reasons right here.  This is a high-risk/high reward game.  I feel like a guy that just bet everything he had on “black,” at a Vegas roulette table.
Because I live in Baltimore, this is a must-have game for me.  The entire town here is going crazy.  Well, even crazier then normal.  If the Steelers lose today, it’s going to be a very bumpy Monday for me and the ragtag band of Steeler fan rebels I run with at work.  Rattie fans are insufferable when they win.
If the Steelers win, I still keep to myself.  Sure, I’m wearing my Steelers hat and coat and a smile in to work and I may post the front page of the sports section outside my cube, but I certainly don’t go around seeking out Rats fans to smack talk.
But if the Rats win, I guarantee I have a line of people outside my cube waiting to gloat and to the "Dundalk Butt Dance."
Objectively, this should be the best game of the year.  Two hard-hitting teams that truly don’t like each other, square off for the right to play one game for a Super Bowl appearance.  That's Old School football.  At work, I’ve just been telling people that my only hope is for a clean game, with no excuses and no controversy.  (I never predict big wins or ass-whippings of any kind… that’ just asking for a karmic smack down.  It’s just bad mojo.)
But whenever the Steelers beat the Ratbirds, there is always an excuse.  It’s the League, the officials, bad calls, bad non-calls, and the ever popular, “We beat ourselves.”  That one’s the most annoying because in most cases, it’s designed for the sole purpose of avoiding giving any credit to the other team.
Odd fact:  After consulting my Sports Event Attendance spreadsheet, (yes, really) I discovered that this is the first year since 1991 that I haven’t been to a Steelers game.  Weird…
Speaking of mojo, which I did three paragraphs ago, I decided to mirror my game day apparel after the AFC Championship game two seasons ago, in which the Steelers beat the Ratbirds, to go to Super Bowl XLIII.  But since I watched that game at my brother’s, I wore regular jeans.  I won’t be wearing jeans to watch at home, so I decided to use the pants I wore for that Super Bowl.  So, for today’s game, I’ll be wearing my black Troy Polamalu #43 jersey, over a cream Steelers ¾ sleeve V-neck and a “Stillers” t-shirt, with AC/DC flannel sweatpants, my ubiquitous Steelers socks and my Terrible Towel over my right knee. 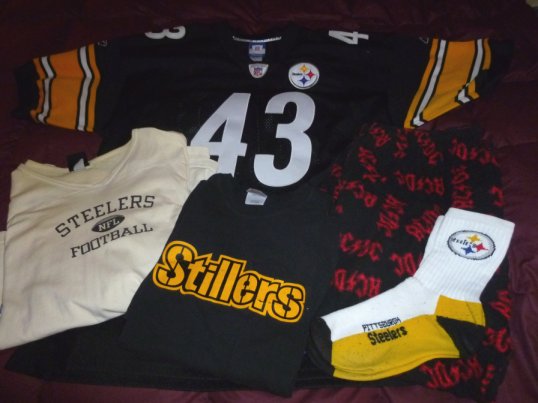 As for the other games this weekend, it goes like this:
Packers/Falcons: Rooting for the Packers, but I picked the Falcons.  The Pack is my second favorite team, ever since I read the book “Instant Replay,” in 3rd grade.  (Written by Packers lineman Jerry Kramer.)  If they were playing in Green Bay, I’d have picked them over a dome team.  But Atlanta looks very strong and they have the home crowd.
Seahawks/Bears: I don’t really give a shit about this one, but I picked the Bears.  After all the whining they still do about the refereeing in Super Bowl XL, Seattle can blow me.  The Steelers made big plays and the Seahawks didn’t.  Crybabies…
Jets/Patriots:  PIcking the Patriots, probably rooting for the Jets.  I have to say “probably” because it depends on who wins the Steelers/Rats game.  If the Steelers win, I root for the Jets, because I think we can beat the Jets.  The Pats; not so much.  If the Ratbirds win, I root for the Patriots, because above all, I can’t deal with the Rats going to the Super Bowl, and the Pats are the most likely to beat them.  If the Ratbirds go to the Super Bowl, I may have to take an unexpected out-of-town vacation that week.  And if the Rats win, I may not come back. 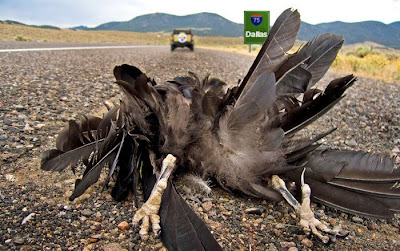 Normally on a day like this, my biggest problem is killing the time between now and the 4:30 kickoff.  Luckily, the forces of nature have conspired to give me a Penguins game to watch at 1:00.  Thank you very much, NHL!  Sure would like to see a Pittsburgh sweep today…
So wish me luck.  If you notice that this site goes dark for a while, just picture me on a beach somewhere, with a 32-ounce insulated mug filled with gin and tonic in my grasp, muttering “Ratbirds… the fucking Ratbirds…” 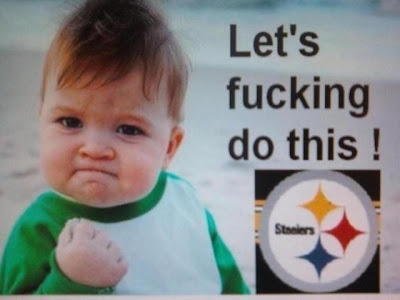 PS. Happy 12th birthday to my nephew Daniel!  May the Steelers deliver you a big “W”, all gift-wrapped in black and gold.
Posted by bluzdude at 12:18 PM

I wore my black #43 jersey to work yesterday with a gold/yellow long sleeve under shirt, and my black Steelers hat. Every one was hating. Damn Cowboys fans.


And today I am wearing the same thing.

And I already predicted that the winner of todays game, wins the superbowl. Which will be the Steelers.

Stand tall, and tell the Cowboy fans that the can't say shit until they win a freakin' playoff game. Which may take a while...

Excuse me Baron Von Retard... The flamingos have requested you turn diwn the fucking football game! You're making them molt and I'll not have it!!!!

NASCAR starts in Feb and you are more than welcome to play that as loud as you please!

-the Queen of Mean

CB,
Will flamingos eat ratbirds? If so, I'll send a meal for them over the wall.

(For those that don't know what the CB is talking about, check out her second post here: http://www.cigarettesandstilettos.com/

Yours truly, Baron Fred von Bluz is a featured player. What, you've never heard of the Fred Baron?)

Since my Saints lost to the Seahawks (WTF?!) I'll be pulling for your Stealers today!

Jessica,
I appreciate all the help we can get. As of halftime, we desperately need it.

HA! What a game! We're all happy, dude. Now we're watching Greenbay and the Falcons. I currently have no comment on the action right now.
I do have a question, though. Do you put those socks under the mattress to keep them so flat??
Yes, I am a little OCD about your socks. Either that or it's a sock fetish.
xoxo,
your hot Arizona auntie

Judie,
And here, by halftime, I thought my next pic would be of those socks going in the washer.

No, there is no mattress pressing... I just smooth them out and take the shot.

Great sigh of relief, here, that I will be able to go to work on Monday and breathe easy.

Of course the Troy #43 made the victory. I even showered and put on Chanel before wearing my Mojo over a black long sleeved T with satin binding. Howzat!
Da Berz over Seahawks is my pick for today. And of course, the Jets. (with or without Benny).
Is the Dundalk Butt Dance anything like the Chumuckla Chuffle? If so, we don't want them doing any of that around here or there.

I wielded REEEE-EEEL Good!
Now, for Da Berz, I'm wearing my famous Sunday Butterfly.
For the Jets, I may do my secret Panhandle Dance, complete with Pan.

Please, tell me you're doing the Panhandle Dance inside! I don't want to have to go spring you from The Home again. They said if they saw you out there naked with that pan again, they'd have to take you in.

No. Rest assured, I am discreetly shrouded in old Mardi Gras beads, confetti, with a pan full of crawdad e'touffe'. And I am dancing on our new driveway to celebrate cement.

I really don't care at all that this post contains the F word...

...I'm still emailing it to my favorite priest, a die-hard Steelers fan.

MBG,
If you'd like, I can email you the post, so you can excise the offending language.

But if your priest is as big of a Steelers fan as you say, he would use that term in regard to the Ratbirds himself.

Love the baby at the end. Oh my God.