Like I mentioned in the last post, I got to babysit my nephews Daniel (12-on Saturday) and Sammy (5).  I love getting to hang out with the boys.  It’s always an adventure.  I never know where it’s going to end up.  This time was a breeze, though.  Heck, Daniel was like my deputy.  He did most of the heavy lifting, getting Sam to eat dinner, and take his shower. 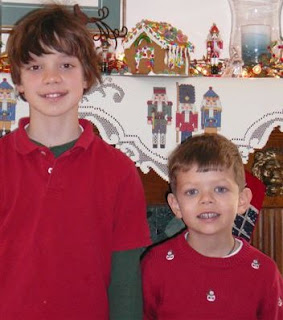 Nothing happened that was nearly as traumatic as the first time I watched them, when Sam was just a little wiener and forced me to deal with changing my first loaded diaper.  And I’ll have you know it was changed successfully, with minimal screaming and crying (from me.)

This time, we had two NFL Playoff games and a Penguins game to watch.

Note to self:  Never watch any more games at your brother’s house.  It is not mojo-compatible.

The Pens lost, as did both football teams I wanted to win.  Worst of all, the Colts lost to the Jets, meaning there was no longer a chance of sending the Ratbirds up to New England to beat on the Patriots.  The Rats are coming to Pittsburgh.  More on that later.

When we weren’t watching the games or eating, we were looking up 80s music videos on YouTube.  Daniel has acquired a taste for 80s rock (thank you satellite radio) so I’ve been trying to show him some stuff I think he’d like.  In fact, for his birthday this Saturday, I got him a fistful of primo 80s CDs… Hits collections from Kiss, Bon Jovi and the Scorpions, Def Leppard “Pyromania,” and AC/DC “Fly on the Wall.”

What, you think I’m getting the kid Duran Duran?  Let his mom get him weenie music like that.  Uncle Bluz is bringing the crunch.


While I was showing them some of the videos, little Sammy asked to see a song he liked: "I Love Rock & Roll."  Whoo hoo!  The boy wants to see My Queen!  After we played that, I showed them "I Hate Myself For Loving You."  It went over well.  How could it not?  After that, I showed Sam the shots of me with my close personal friend, Joan.  How can you tell if a 5-year old is impressed?

Later, I tried to help Daniel out in the area of playground trash talk.  He’s at a new (Catholic) school this year and seems to be “new meat” for the Ratbird and Capitals demon-spawn.  To tell the truth, he’s holding his own pretty well, to hear him tell it.  I mostly advised that whenever there’s a Steelers or Pens loss, he should have an angle in his pocket already, in anticipation of having some other schmuck say something.

The Capital fanboys are easy.  A) They don’t know hockey worth a damn and B) They’ve never won jack-shit.  The Pens have beaten them in 7 out of 8 playoff series.  Penguins star Sidney Crosby is a consummate all-around player, makes his teammates better and excels at whatever he chooses to.  Capitals star Alex Ovechkin is a hotdog showoff who hasn’t passed up a shot in 5 years, doesn’t play defense and thinks that taking cheap-shot runs at people makes him a big hitter.

Anyway, that’s all the ammunition he needs there, and he knew it already.  He also says he gets a lot of good material from his dad.  He said, “I just have to sit there and he’ll say stuff and I’ll think, ‘Hey, I can use that.’”

I believe him.  His dad was talking shit before the term “trash talking” was even invented.  My brother was the most profane kid on the block.  When he was in elementary school, he used to say shit to the teenage girls across the street that left them gasping.  They’d come over to tell my dad, and he’d say, “Well, what did he say?”

What really bothers me is that in going to this “nice,” religious Catholic school, Daniel is already getting hardened by the other kids.  I can see it right now.  This is a smart, polite, considerate kid getting surrounded by jackals, trying to bring him down to their level.

Mostly, they seem to spend an inordinate amount of time on the subject of ‘who’s gay,’ the go-to slur of the elementary school set.  Daniel said that there’s one kid that has vagina photos on his cell phone that he eagerly shows around the playground, in addition to a photo of his own little dick.  Sixth graders!  Isn’t technology wonderful?  When I was in sixth grade, we had to get our cheap thrills out of the encyclopedia.  (Volume “R” under reproduction and Volume “S” under sex.)

This same kid seems to be the one most often calling other kids ‘fags’.  I told Daniel to tell him that’s a strange accusation coming from someone that carries a picture of his own dick on his phone.  I told him that the next time the kid breaks out the dick pic, ask him if it’s a shot of a Chinese dinner because it looks like a tiny little mushroom cap.

It’s just sad to see all that bullshit coming out at so young an age.  All too often, little pricks on the playground grow up to become big pricks on campus or on the job.  I guess the best one can do is arm the kid with some resources or options and hope he’s strong and smart enough to get by.  It’s not like you can (or should) hover over the playground.  (Although I can see the appeal.)  Kids need to know how to handle conflict on their own.

When I was a kid, other kids used to make fun of my lunches.  I don’t even remember what they were… probably leftovers from dinner.  But they weren’t PB&J on Wonder Bread and were therefore “different.”  Mom told me that when someone makes fun of my lunch, to ask them, “Well, what’s that slop you’re eating?”

I know, it wasn’t exactly Don Rickles but it got the job done.

The Mojo Boogie
On Sunday, my football plans went further awry when the Ratbirds quite handily beat the Chiefs, setting up the next round of playoffs with the Rats playing in Pittsburgh and the Jets going to New England.

Playing the Rats in the playoffs is a high risk/high reward prospect for me.  Victory is sweet but defeat is unbearable.  I feel like a guy in Vegas that just put everything he has on "red" at the roulette table.  Either way there will be racing pulses, a lot of swearing, followed by a lot of drinking.

But I’m breaking out my Steelers Mojo early this week.  I plan on wearing Steelers hats every day (as opposed to mixing in some Pens hats, like I usually do), and wearing a lot of black and gold.  Sitcom Kelly is considering having a Playoff Party on Saturday, so I may end up there.  Mojo-wise, that would be uncharted territory, but that will be the least of my worries.

Primary concern is to stay away from the Pit in her basement.  I’d hate to trip or “accidentally” get elbowed in.

Good thing I really like ziti.
Posted by bluzdude at 7:47 PM

Your nephews are too cute for words. Can I say that?

If you end up in the Pit, I'll make sure to try to send Jodie Foster your way.

Cassie,
Yes you may. They are adorable.

You send Jodie Foster to my Pit, and I'll never want to come out.

"What's that slop you're eating?" is good olde Jackie Gleason, worked on the first grade bully. The Word is mightier than anything a sixth grade neanderthal can lob. Daniel rules.
Sam is no doubt in love with Joan but will never let you know, until he marries her.
Please avoid Pit falls.

Mary Ann,
Sam can't have her, she's mine. I saw her first!

Bluz, there is a very strong family resemblance!! God, you must have been cute when you were younger!!
Ziti is serious comfort food for this gal! Especially after the horrible f****** weekend we had. Thanks for your comment, by the way.
xoxo, your hot Arizona Auntie!

Daniel looks just like my brother did when he was young, but acts much more like me. Sam looks like his mom, but acts like his father. (a hellion!) My brother got off light, with Daniel.

Ziti rocks... that's why it is the primary menu item for Pit Dwellers everywhere.

I am breaking out all of my Steelers gear this week as well since all the Steelers haters in my office wont shut the hell up.

What an awesome uncle! 80s rock and play ground defense preparation. You should charge for classes.

I got in trouble for writing a note to my boyfriend about french kissing in 6th grade, and kids are showing pictures of their naked bits now? Geesh. Times, they are achangin' and I feel oooooold. :)

Those kids are adorable, and you're teachin' 'em right!

The diaper story was a FUCKING classic Bluz... Still probably my FAVORITE ever!

I do believe that Catholic school produces more atheists per capita than the Soviet Union did.

Yeah, this is going to be a sweaty palm week for ya, Bluz. I find myself grateful that we split with them during the regular season. Would hate to think of having to beat them a third time this year. Plus, they'd be extra mad. Plus, when we lost, it was w/out Ben.

Be strong there behind enemy lines!

Trash,
What the hell can they have to talk about? Neither Houston nor Dallas even made the playoffs? Tell’em to sit down and shut up… the grownups are talking.

Jessica,
Well, I don’t have any kids, so I might need one of them to take me in, when I’m old. Want to make sure I’m on their good side and they only have favorable memories of Old Uncle Bluz.

Cristy,
I KNOW, right?
In 6th grade, I couldn’t find my own asshole with two hands and a funnel. I suspect the kiddies may have the pictures, but they still don’t quite know what to do when they actually see one. I know they’re not getting any Sex Ed in Catholic school, other than Thou Shalt Not!

CB,
Mine too… in retrospect. At the time, not so much!

Carpetbagger,
Yeah, they haven’t beaten the Steelers with Ben playing since 2006. And now that they’ve whomped on the Chiefs, the whole town thinks they’re world beaters again. I think they live more “on a pendulum” here than they do back in the Burgh.

I just hope the outcome is “clean”… no controversy, no blown calls, no contentious over-rules, no Tuck Rule… No Excuses. (and preferably with the Steelers winning, of course.)

My childhood might've turned out completely differently if I'd had an Uncle Bluz. I might not be so neurotic. And I bet I'd know more about sports.

Your nephews are awesome.

Mrs. Bachelor Girl,
Everyone should have a crazy Aunt or Uncle that teaches them stuff, and gives them insight into their parents that they might not have known.

And yes, they are! Thanks!