Just a jumble of quick bits here for you today, on this busy weekend.

Special Guest Star
Remember how shows used to have “Special Guest Stars?”  I always wanted to be one, preferably on The Love Boat, just so I could hit on the cute cruise director.  Anyway, today I got to do just that!  (Be a guest star, not stalk Lauren Tewes.) 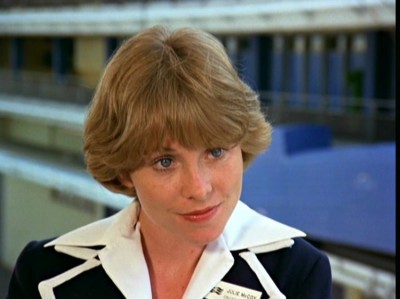 Yummy!  She made waves on my Love Boat…

My dear friends and Darwinfish Fry alumni, Rich and Cher at AskCherlock, asked me to do a guest post for them.  If you’ve ever been to their site, you know it’s an oasis of eloquence, wit and compassion.  It’s not a place you’d normally find the profanity, soapbox rants, football nonsense, embarrassing stories and bathroom humor for which my site is noted.  So I asked if they were sure that they’d be able to recover their readers after I’d defiled their blog.

Apparently they’ve both been shot up with horse tranquilizers because they still wanted me to guest post.  And out of respect to them, I refrained from the frat-house frivolity that I usually scratch out and instead, wrote something of which I’m actually very proud.

New Year’s Eve was the anniversary of the death of my childhood hero, Pirates right-fielder and legend, Roberto Clemente.  I’ve been meaning to write about him since I started my blog, but the time never seemed right.  Please click here to have a look.  (After you finish here, of course!) 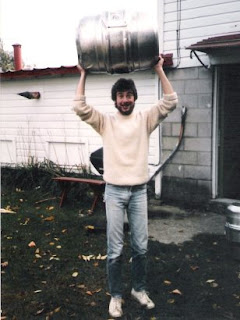 Today is another sad anniversary for me.  It was 10 years ago this morning that I got a 5:30 AM phone call to tell me that one of my best friends had died.

Brill was one of my best buddies… one of the guys with whom we started The Barn.  He lived two doors down and we used to spend a lot of time together, even when the rest of the guys weren’t around.

I’ve never stopped missing him.  And I still can’t look at a fighter jet “fly-over” before a big game, without tearing up a bit and thinking about how my buddy would know exactly what it was.

Last year, I wrote the full story on my buddy Brill.  If you’ve begun visiting here since last January, you should really have a look.

Rest in peace, buddy.  You were the best!

Bye Week Mojo
The Steelers earned a first-round bye for this weekend, so they won’t play until next Saturday.  Their opponent will be determined by the games today and tomorrow.  My rooting interests are… complicated.

I’m predicating everything on the other team that got a bye, the New England Patriots.  I don’t want to face them; not after the way they destroyed the Steelers during the regular season, in Pittsburgh.  If they were to play again, it would be in the AFC Championship game, in New England.  They’ve already beaten the Steelers in 2 AFC Championship games, plus another Divisional round game.

The only hope to not play the Pats is for someone else to beat them next week.  For my money, only the Colts and Ratbirds have a chance.  The Colts have Peyton Manning, but they are a dome team with a poor history of playing in New England.  The Rats gave the Pats all they could handle this season.  I think they provide the best shot at beating them.  And I’m not worried about then having to face the Ratbirds… We split the games this season… they beat the Steelers who had to play their 4th string QB, then lost when the Steelers had Big Ben back.

A Colts win against the Jets sets up the next game like this… Chiefs win, they go to NE.  Rats win; they go to NE.  Even if the Rats don’t win, perhaps they can beat up on them a little… maybe throw a couple of those cheap shots like they did against Pittsburgh.  Ben looked like a big goober before he got his nose mashed.  Let’s see how pretty-boy Tom Brady handles it.

Ultimately, I win either way.  Rats win, they go to NE to do my bidding.  Rats lose, I get to make fun of them all week and savor the suffering and mental health breakdown that this city will undergo.  After all, they’ve been planning the Super Bowl Parade route here since the opening week.  The writers are still touting the Rats “amazing defense”… a defense so amazing that just last week, the Bungles moved the ball up and down the field on them at will.  (At least they did until someone would fumble the ball on their own, or knock passes up in the air to be scooped up like yesterday’s trash.)

Their defense is over-rated.  Teams have been moving the ball on them all year.  I just hope they have enough to bang up Tom Brady a little.

I’m going to have to watch tonight’s football (and the Penguins game) from my brother’s place.  I’m on babysitting duty tonight, so that should be good for a memorable blog post.  I’ll have to see what the boys have in store for Uncle Bluz this time around.

Until then, I leave you with another cartoon, from the brilliant stash of First Door on the Left. 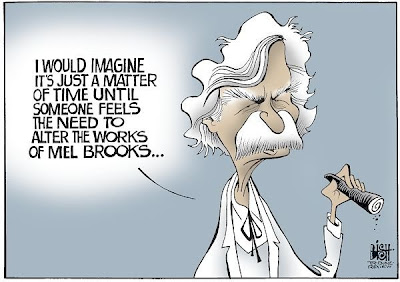 As a reminder, be sure to visit my guest post at AskCherlock, by clicking here.
Posted by bluzdude at 1:19 PM

Every time we see or hear the Blue Angels, we see and hear Brill. He is one now, I know.
Beware of five year olds with crowns and twelve year olds with chemistry sets. You are in for a wilde ride. Talk about SATURDAY NIGHT LIVE!

I am sorry about the loss of your friend from 10 years ago. And I remember Roberto as well from my childhood back in da burgh.

Mary Ann,
At least there is no diaper changing on the horizon.

Trash,
Thanks for the good thoughts. It's tough when you lose a peer. That's not supposed to happen until you're old, and I'm not that old yet!

I have decided to download "Huckleberry Fi" as it is now called (No "Ns") on my Kindle to find out just what the hell everyone is complaining about.

Losing a friend SUCKS. I share your pain, Bluz.

Did you know that once Carly said as we were crossing the Roberto Clemente bridge, rather proudly, "Look! It's the Jose Clemente bridge!" I about died.

Thanks Cassie, and I know that YOU know of which you speak. We've both lost friends that we'll never really get over.

As for the "Jose Clemente Bridge," are you sure she's really the older sister? Dios mio!

Late Addition to All:

The pressure is now OFF. With the Colts loss to the Jets, the Ratbirds/Chiefs now has no bearing on who plays the Pats. I can go back to hating on the Ratbirds and rooting feverishly against them.

Clarity is a good thing!

My condolences on your loss. Losing a close friend is so painful. *hugs*

Thanks, Raven, I appreciate it.

I'm so sorry about your friend.

The funny thing about playoff ins and outs is I can understand it if I were to take the time to digest all the details, but mostly I just let Tom talk it out. How do guys keep all that stuff straight? I mean, I really do get the NFL stuff pretty well, but don't get me started on bowl games. Oy.

Cristy,
I just keep reading internet and news articles until I find one that spells it out in a way that I can understand. For me, it helps if I have a clear cut goal, ie. looking for a scenario in which someone beats the Patriots.

I'm not looking for help anymore. Looks like we'll have to handle it ourselves.

Checking out the guest post now, just to avoid reading this one and all of its footballness.

It's always a good day for a Patriots and a Ravens loss. Here's to hoping it's an excellent weekend.

Burgh Baby,
Annnnd… right back to football… lol…
Looks like the Steelers will have to take matters into their own hands and dispatch the Ratbirds themselves. Because Lord knows I’m going to be in for a bumpy week if they lose. So I’m starting with wearing some Steelers mojo early this week…

I'm glad I had the opportunity to know Mark, if only for a few brief years. I'll always remember his unique wit. You were fortunate to have had such a wonderful friend--and he in you.

Sherry,
Thanks, that was sweet to say.

I sure wish we could have gotten you out to the Barn... You would have loved it out there. That's were we were truly 'home.'