In last Thursday’s post, (Cleaning the Erasers), I talked about another case of a female teacher having sex with male students.  (Quick summary: What’s the freakin’ problem?)  I also mentioned that I, myself, once “dallied” with an older friend of my mom’s.  As no one seemed to want to comment on the teacher, and rather wanted to hear about my story, I will bend to the will of the people.
(Yeah, that took a real push, didn’t it?)
The time was somewhere around 1985, while I was living in the Bowling Green apartment, before the Summer of Bow Chicka Wow Wow.  The girlfriend and I hadn’t technically broken up, but I was thinking about it a great deal.  Things weren’t going well
The occasion was a Barn Party… I don’t remember the reason, but it didn’t take much back then.  I do recall that it was a “big one,” because I not only had my work friends over, but my folks brought people too.  As had become my habit for our Barn Parties of that era, I went alone and would spend the night in my old room, leaving the girlfriend at home.  She hated parties, drinking, loud music and fun of any kind that didn’t involve theater or show tunes.  (Yeah, like that relationship was ever going to work.)
So the party was rolling along; I was spinning the tunes and there was the usual drinking and dancing and carrying on.  At one point, Mom came up to me and said, “Mrs. Robinson wants to dance with you.”
Director’s DVD Commentary: Mom introduced her to me by her first name and that’s what I used that night.  I don’t want to use her name here, of course, so I looked up what Mrs. Robinson’s first name was in “The Graduate.”  Funny thing though… none of the adults in “The Graduate” were given first names.  Only the young ones were identified by first name.  So here, I’m just going to have to go with Mrs. Robinson.  But we were never that formal with each other.
Mrs. Robinson was reasonably attractive, looking to be in her late 40s.  She was tall, had long brown hair and looked good in tight jeans.  I knew absolutely nothing about her except that she was one of Mom’s poet friends.
Not wanting to be rude, I asked her what she’d like to dance to.  She asked if I had “Whiter Shade of Pale.”  I did, but not the original version.  I had a cover by a band Sammy Hagar and Neal Schon of Journey put together (for one album).  Think more power chords, less trippy keyboards.  But she said that would do.
So we danced and chatted a bit… about what, I have no idea.  But even a numb-nut like me could see that she was flirting with me big time… she was totally giving me the googley eyes.  She never propositioned me or anything; her behavior alone gave me plenty to think about.
Problem is, when you’ve been drinking beer all night at a party, it’s hard to do your best thinking.  So you kind of just stop and go with your instincts.  And the instincts of any 24-year old dude is to bang anything available.  So I stopped drinking a bit earlier in the evening than was my custom and plotted my next move.
A great thing about hosting these Barn Parties was that I had home court advantage.  I could just leave the party whenever I wanted and walk inside to go to bed.  So as the party was breaking up, I went inside and saw that Mom was in the kitchen, talking with Mrs. Robinson.  I joined in the conversation with the objective of getting rid of Mom.  At one point, Mom went upstairs and I thought she was going to bed, so Mrs. Robinson and I began to googley-eye each other with renewed intensity.
But Mom came back down again, saying she would see Mrs. Robinson out.  I told her that I would take care of that for her.  I probably said that with more ‘edge’ in my voice than is appropriate when talking to one’s mother, but she was inadvertently putting on a major CB.  So she said goodnight and went back upstairs, probably due to the visible pheromone cloud hanging in the air.
With Mom and Dad upstairs in bed, Mrs. Robinson and I went over to the living room couch and proceed to claw each other’s pants off.  I asked if I needed to get a condom.  She laughed at me and said that it wasn’t necessary, as she was “sterile.”
I took that to mean she’d had her tubes tied, but her choice of terminology cracked me up.  (Inside.)  It sounded like she’d been dipped in alcohol and hermetically sealed for my protection.
So we got busy with great gusto.  Everything went pretty well, all things considered.  I know I held up my end of the bargain.  I could tell because she kept going, “Shit!  Shit!  Oh shit oh shit oh shit!”  (It was like a good thing, as opposed to like she stepped in something.)  As flattered as I felt, I was also concerned because my parents were in bed, not 30 feet away in their room at the top of the stairs.   It was like I was in that scene from “Porky’s” when Kim Cattrall starts howling when she’s up in the equipment room with the young coach.  I almost considered the solution the movie presented, but thought better of it. 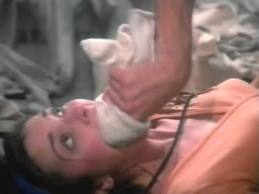 That would be kind of undignified for a poet.  I kind of shushed her instead… I mean, the last thing I needed was Dad hollering down, “Hey, shit or get off the pot!  We’re sleepin’ up here!”  Would have totally killed the mood.
Anyway, we did our thing and I kept my word by seeing her out to her car.  I felt pretty excited about the whole thing.  I mean, it’s an ego-boost to know that you took an educated, worldly grownup and turned her mind into jello.  The “cougars” may be on to something.
Director’s DVD Commentary: Why do older women going after young guys get a cute name like “cougars?”  Older guys going after young girls are just called “dirty old men.”  Unfair.
In the harsh light of day, the following morning, I began to reconsider what the hell I’d just done.  I was just hoping I could keep a lid on things.  The last thing I wanted was for the girlfriend to start hearing rumors.  I began to worry even more when I went to work the next time and my co-workers who were at the party and had seen me dancing with Mrs. Robinson were all, “So how did it go?  Hmmm? Did ya get some?  Hmmm?
I was all, “Nothing happened.  We just danced and that was it.  I went in and went bed, so don’t be spreading any bullshit.  Nothing happened.”
I definitely left the ‘edge’ in my voice.  Luckily, I was able to keep a straight face.
But I needn’t have worried.  No one said anything more and the girlfriend and I broke up on our own shortly after.  I saw Mrs. Robinson at other parties, but kept my distance.  I considered our liaison to be strictly a one-time thing, right up until it happened again.
It was another party, maybe a year later during the summer.  By this time, I was living on my own and unencumbered by any relationships… meaning I wasn’t getting any.
I never mixed with Mrs. Robinson at that party either, but by the end of the party, I was feeling like I wanted a little some’um-som’um.
Again, when I came in, Mom was talking in the kitchen with Mrs. Robinson.  This time, I was much more subtle.
I went upstairs and changed; or rather I should say, I took off all my clothes and put on a pair of knit shorts.  Then, as opposed to now, when that would be considered Babe Repellent, it was a good look for me.  I was all long and lean and tanned.
Knowing full well what I was doing, I went downstairs to the kitchen to get a drink of juice.  I knew Mrs. Robinson was mentally undressing what little I had left on.  I had my drink, said goodnight and went back up to my bedroom to set the trap.
I left my door ajar and sat up in bed, petting Amos, our Siamese.
Before too long, Mrs. Robinson peeked in the door and slipped inside.  She sat on the side of the bed and pet the cat with me.
“Cats are so sensual, don’t you think?”
Yeah, so sensual that he got tossed right out the door, landing with a thump and a “Rooowl.”  I made a mental note to give him a treat, later.
Mrs. Robinson pulled the covers back and went to work on favoring me with a treat.  When she finished “treating” me, she asked if I had anything for her.
“Hop on,” I said.
Always the sweet talker.  Lucky for her, it was 2-for-1 night at the House of Bluz.
Oh to be 25 again.
When we’d finished, she went back downstairs and returned to the party.  I rolled over and went to sleep.  (Yay for home court advantage!)
I never saw Mrs. Robinson again after that night.  Before long, I’d moved to Cleveland and began the non-cougar-bait portion of my life.
Posted by bluzdude at 6:00 AM

Email ThisBlogThis!Share to TwitterShare to FacebookShare to Pinterest
Labels: Best of Darwinfish, Stories and Misadventures, The Barn