The Steelers are on their “bye” this week, so there is no game for me to dress for or obsess over.  So what to do, what to do?

Make do, that’s what to do.

Ratbird Whine
Earlier this week, I spotted a story about the Ratbirds coach John Harbaugh complaining about some of the music that was played when his team was at Heinz Field, two Sundays ago.

Seems he was incensed that the scoreboard operator was displaying the game stats comparing the two quarterbacks, the Ratbirds’ Joe Flacco and the Steelers’ Ben Roethlisberger.  At the same time, the PA was playing Lynyrd Skynyrd’s “What’s Your Name (Little Girl).  He was presuming that it was a shot at his guy, but hell, that could have been Big Ben’s own personal theme song, up until last year’s great Operation Reputation Rehabilitation.

I don’t even know that it was done on purpose… that’s the kind of song that you might hear at a Steelers game anyway.  But even assuming that it was on purpose, wouldn't you think that an NFL coach has more important things to worry about?  Just goes to show how badly the Steelers are in the Ratbirds’ heads.

John, just take your win and shut the fuck up.  What happened the next week when your guys ate it in Seattle, did they play The Bitch is Back in your honor?  Considering all the scoreboard bullshit (like never replaying any play that doesn’t favor your team) and public address insults directed at the Steelers (like never announcing who made the tackle against your offense) in your stadium, you just look like a hypocrite.

Towel Mania
I saw this clip on That’s Church last week and had to steal it run it myself because it’s just that cool.

Earlier this year, ESPN had solicited fans to submit photos or video of themselves waving their Terrible Towel in interesting places.  At the time, I considered sending something in, but I really hadn’t been anywhere noteworthy, with Towel in hand.

Nothing I could have done would have made the cut, because the commercial is on YouTube now and is just amazing.  It goes to show how widespread the Steeler Nation is across the world.  Check this out…

Baltimore hates us because they will never be able to do something that it this cool.

Twi-Lights Out
I hear the new Twilight movie is out this weekend.  I am on neither Team Edward nor Team Jacob.  I am on Team Who Gives a Shit about Sullen Sparkly Vampires That Take Three Movies to Finally Bang the Hot Chick.

And what’s up with all the grown-ass women that love these movies? 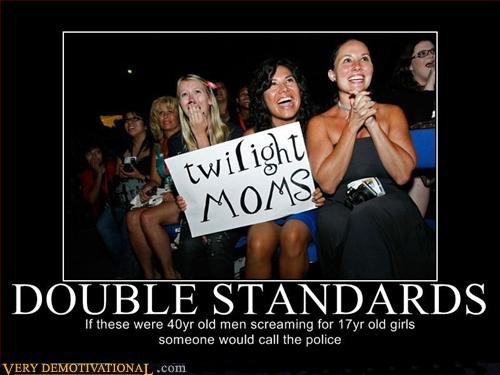 Now, leave me alone… I can’t be bothered with this weak-ass bullshit… I’ve got the last Harry Potter movie to watch on DVD.

The No-Mojo Boogie
Since I don’t have a game to dress for, I thought this would be a good time to show you what I’m NOT wearing.

I have a couple articles of Steelers apparel that I no longer wear during any Steelers game.  I figured that with the Steelers not playing, it was a good time to drag these out for a picture.

(Note: I am NOT wearing either one today, either, I’m just showing you the picture.) 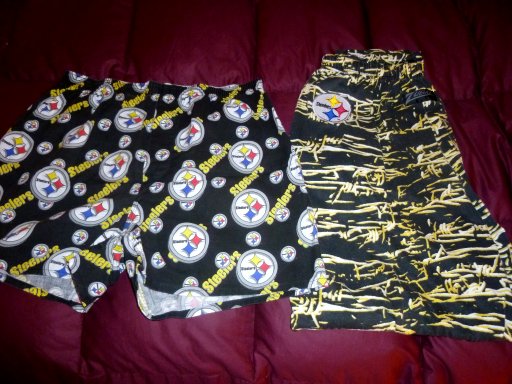 They hadn’t done me any good in previous games, but I was not yet experienced enough to correctly read the tealeaves.  I just figured, ‘the louder and uglier, the better.’  It worked insomuch as it was a loud, ugly game.

To tell the truth, I don’t think I can squeeze my big ass into anything I wore in 1995 ever again, so I have a built in insurance policy against any future lack of judgment.
Posted by bluzdude at 1:06 PM

Hey Bro,
This is your sister speaking and just read this entry. I know you think that I am "such a little girl" for being way Team Edward. Scott and I saw BDP1 Friday afternoon at 12:00 p.m. - yes - first showing of the day and both LOVED IT!! The Undead Rule!! And, no, I'm not a TwiHard Mom. Just a forty-something big-time fan. Love ya! Mrs. Nibbs

Nibbles!
So nice of you to comment. Unfortunately it's about that lame movie. I say, if you want vampires, try the grown-up vampires on True Blood. Those fangers mean business, the guys are better looking and all the vamps bone everything that moves. Bloody good time!

"I am on neither Team Edward nor Team Jacob. I am on Team Who Gives a Shit about Sullen Sparkly Vampires That Take Three Movies to Finally Bang the Hot Chick."

Since SHE brought it up, I can explain. "Mrs. Nibbs" has been my nickname for my sister since right after I moved to Baltimore. I used to joke that if she wasn't careful, she was going to end up as a crazy old Cat Lady... Old Mrs. Nibbs from down the street.

So that's what she's been, even though it hardly fits (what with being married now with only one or two cats). I refer to her as Mrs. Nibbs, Nibbles, Nibbles Nibblington and Mrs. Nibblesworth. And all of them are irked at me for dissing Twilight.

Thanks to the "poverty and stress" diet, I can easily fit into my jeans from 1995. So glad I saved them. And yeah... "Twilight?" Not so much.

Jayne,
I remember that diet... I OD'd on it back in the 80s when I was managing record stores. High stress, long hours and no money... the pounds just melt away.

What the hell are Zubaz pants? Hammer Pants? I'm not that much younger than to you have missed this trend.

And, you will be happy to know that there is a certain 60 something mother of mine who has been BEGGING me to take her to see the new Twilight movie. So, over the Thanksgiving holiday, I will undoubtedly be subjected to the sparkle.

If you get into your fantabulous 1995 garb...I'm so taking pics of you if you go to the Superbowl. Oh...and I will find you. If you hide in shame at your home...well, shame on you. My NFL MAN thinks the Steelers are going to the Superbowl. Wouldn't you hate to miss it? Especially when you have all the gear.

I'm a Harry Potter nut, and as you know neither of us at ABftS can stand Stephenie Meyer or the series of subsequent film abortions, er adaptations, of her books. No, let's stick with abortions. Give me some Cheetos, a beer, and a wide-angle shot of Emma Watson, and I'd watch HP in my undies any day.

Keil brought the latest Harry Potter flick over for us to watch on Saturday night. Rod was the only one of us who managed to stay awake.

As for that underwear, I am refraining from commenting on it because my comments might be completely misconstrued, leading people to believe that I think of myself as a cougar.

I read the first Twilight book, curious to see what all the hype was about. Meh. Interesting concept, but I had no desire to read anymore in the series or watch any of the movies. I thought her adult book, The Host, was terrific though.

And as a huge HP fan, I was fairly pleased with the film adaptations.

DG
Zubaz are loose, loungey, comfy, cotton pants that are made in team colors, with loud patterns… tiger stripe, cammo, et al. They were big in the early 90s, and can still be seen occasionally at tailgates.

Perhaps your mom longs to be a 14-year old girl again. It’s nice of you to facilitate, but don’t be surprised if she wants to go the malt shop afterwards.

Fargo
It’s funny you mention it. Back in ’95, I’d just gotten a brand new video camera. So before the Super Bowl started, I set up the tripod and filmed my mojo-dressing ritual, explaining why I was donning each article of clothing. It ends with me all decked out and twirling my Terrible Towel.

Fat lot of good it did, though. I considered knocking it off to an .mpg file and posting it, but the memories are just too painful. Plus it might burn everyone’s retinas.

You weren’t reading me then, I wrote about when I actually did go to a Steelers Super Bowl… the one in Detroit. (http://darwinfish2.blogspot.com/2010/02/super-bowling-pt-2.html) It was the experience of a lifetime, but one I’m unlikely to experience again. That trip was the perfect storm… it was in Detroit, so we could drive, thus eliminating airfare. We used to live an hour away in Toledo, so we had places to stay, eliminating jacked up hotel rates. All we had to do was cough up for tickets… which were $2600 worth of coughing apiece.

We were decked out for that game as well and obviously rocked the right mojo.

Hope your NFL Man is spot on. He should be… he obviously has good judgment.

Brandon (Beer)
I agree with you 1000%. But it has to be the Emma Watson from the later movies… otherwise, it’s just plain wrong.

Judie,
Fell asleep?? Gah! I saw it first in the theater and was riveted the entire time. You gotta see how it turns out!

Nothing you write in reference to me should qualify you as a cougar. Cougars prefer much younger prey than I.

Sherry,
I thought the HP films were about as good as they could get them, without breaking them all into multiple parts. It’s just the nature of film-from-book adaptations that something has to get cut.

Those pants are hilarious and I think you should post the .mpg file for laughs and giggles. I remember when everyone wore those kinds of pants...like parachute pants.

Deb,
Yeah, I consider myself lucky that they weren't made out of parachute pants material. Would have brought the 'heinous' to a whole new level.

Bluz, they had to wait to GET MARRIED to bang. You heathen.

Katie (ettible),
That's why I like True Blood... they just look at what they want and then the clothes are in the air. Much simpler that way.