Since my last couple posts have been kind of unfocused, I figured I’d break out a story from The Archives.  Actually, I’ll have to tell you two stories and surprisingly, one of them has to do with shoes.
[Watches female eyes light up across the blogosphere…]
It all starts with the boots.
One day back when I was living in Albany, Future-Ex and I were cruising through the mall, just her and I.  This was before we were married, but after we’d bought the house together.  As we passed in front of this exotic boot store, I stopped at the window to look at the snakeskin boots.  I’d always thought they looked really sharp.
So in passing, I said, “Man, if I ever had a couple hundred bucks to toss down the toilet, I’d get a pair of snakeskin boots.”  We continued on our way and I never mentioned it again.
Cut to my birthday later that year and lo and behold, she got me a pair of snakeskins!  I was overjoyed!  I had no idea she remembered that comment and was thrilled to have such an extravagant wife. 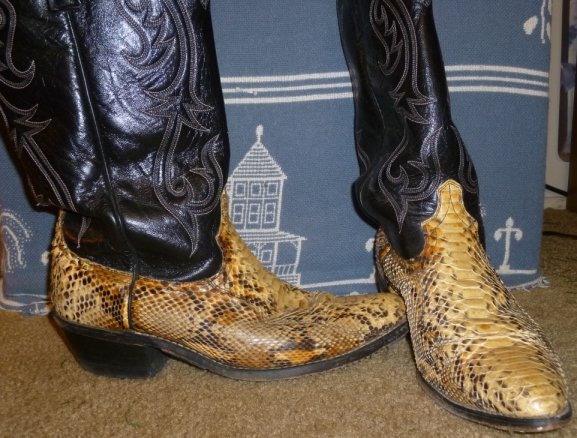 "Gimme that olde tyme Re-LIG-ion..." ah yes, fertility rites and human sacrifice.
Would have been happier than your experience.
My friend,Randy with partner, Andrew, attended the Unitarian Church. A lady said to him of his choice, "Oh, Unitarians. They're the ones who don't believe in anything."
But they will marry anybody.

Mary Ann,
I assumed they believed in Units... both English AND Metric, just to be inclusive.

Now you know exactly how women feel in high heels. Anything for vanity.

Oh, and I'm a recovering Catholic, too. A bigger contradiction in terms you'll never find.

My my those are some crazy looking boots. You should bring them with you to the south and go line dancing.

And man that's some hippie church. You would think that if they really wanted you to join, they wouldn't make you feel so awkward. At least no one cares if Catholics hide on the back row and keep to themselves. ;)

Jayne,
That's right; once you're in, you're in for life, scars and all.

Jessica,
Dancing in those boots would have me crawling on my hands and knees in 20 minutes.

And you're absolutely right! That's no way to entice people to come to your church. Maybe they hated us immediately and wanted to make sure that after the wedding, we never set foot in there again. 'Cause that's sure how it worked out.

Wow. So sorry about the church. They should be more open to fancy shoes.

Most of the churches I've been to have assigned seating for their large contributors. Now...you're tall, but did they actually think you would be a large contributor? Happy to have some of the Roman Catholic Mass back, BTW. I couldn't get the new responses down. Now I will look as though I'd never left!

Having spent some time in Texas, I had a pair of Tony Lama's once. Ostrich skin. Everybody told me that cowboy boots were SOOOO comfortable that I'd wear them all time. Well, maybe we didn't bet them custom fit, but my experience was much like yours. They pinched my feet and hurt.

And what kind of Scientology-fueled church did you stumble into? I always thought that Unitarian were pretty atheist-friendly. I can't imagine doing that first-timers. Most of my old congregation would've stomped out if I had pulled that kum-ba-yah shit.

Cassie
They should have been open to people that don’t like to sing in public, up in front of strangers. What did they think it was, American Idol auditions?

Cher,
I’ve never seen a church with seating divided up by donors. Sounds a lot like modern society. Yeah, I heard about the changes to the liturgy. Wouldn’t have made a difference to me… One of the things I always hated about Mass was the mindless, rote, repetition. Got zero value out of that. Reeked of indoctrination, to me, regardless of what you’re forced to repeat back.

Carpetbagger,
Yeah, like I said, the tops were nice and soft, and they fit my feet, but there was absolutely no padding in the sole and the edges of the heel dug in. Not practical.

I didn’t really have any beef (that I remember) with their content, just that they forced me into a position for which I was unprepared and wouldn’t like even if I was. If I’m going to be the center of attention, I’d prefer to be doing stand-up, or telling stories, not lip-syncing drudgey songs about The Lord.

C'mon now. You would totally rock AI tryouts. You'd make the show for sure...on the outtakes.

Cassie,
Unlike most of the people in the first couple week's episodes of AI, I have people in my life that would keep me from making an ass of myself on national television. And I'm one of them.

Bluz! All the hypocrites sit in church pews on Sundays. Come on! I know you don't want to be one of those any more than I do.

Mad,
Of course I didn't want to be there. I just didn't see a way out of it, and it seemed to be the least we could do since they agreed to marry us. But once we said our "I do's", we never set foot in there again.

And if I ever should decide I need a place of worship, I'd look for one where I could sit in the back and stay out of the way. I would never attend a place where I had to re-enact scenes from a holy version of Glee.

Oh man, I cringed for you. I can kinda relate. I was once dragged to a Pentecostal church by a girl I was looking to date. The service was 4 hours long (the first 2 hours singing, the next 2 hours the preacher screaming, I mean literally screaming his message). At the end, they had the slaying of the spirit, you know, where the preacher puts his hand on your head and screams I HEAL YOU IN THE NAME OF JEEEEZUS. They made me do it too. So while everyone else flopped onto the ground and were convulsing like they'd had a seizure, I felt nothing. So I just kind of gave him this awkward glance. And he took me by the hand, and gently just had me lay down on the ground next to these seizing retards, and went on his way. Laying on the cold floor, staring up at the church ceiling, surrounded by people speaking 'in tongues.' This scene is still permanently engraved in my brain.

Dude, I've been to a lot of churches, but I've yet to understand why they think newcomers would LIKE having attention thrust upon them. It just doesn't make sense. Leave me alone, please. I'm trying to judge whether you're my kind of crazy in peace before deciding to join your circus. Kthx.

My dad always wore boots to church. Boots and jeans. I thought it was the very best church look possible. My mom was not a fan and dressed the rest of us in lace-collared floral dresses.

Bryan (Beer)
O…M…G… You win the Church Aversion World Series. That is the most horrifying experience I can think of. And to think, I used to brood and complain whenever our family was “chosen” to bring up the hosts and wine for communion.

We were a 5-member family and there were 5 things to carry, so we got picked a lot. I hated that, especially because by that time, I was having serious doubts about the whole thing, so going through that charade seemed to me to be the height of hypocrisy.

But that pales in comparison to being expected to throw yourself on the floor and roll around. Oh, and to endure a 2-hour songfest and 2-hour freakin’ sermon? I’m sorry, but that’s cutting into some serious football time. I don’t care how hot the girl is, I’m out. Or at least there would have to be a quid pro quo. In writing.

Dude, your story would make a great post for A Beer for the Shower.

Cristy
That is exactly my point. You have to build up to the full on frontal assault. I’ve never been the one to jump right into the deepend… I have to wade in, a toe at a time. There will be time for cannonballs once I’m acclimated.

Mundane
Was your dad short? Maybe he just wanted to be able to see more than the droopy butts in front of him.

I’m sure there are boots out there that are comfy, so I’d hate to smear the general bootery based on a single specimen. But mine were just not a good match for my big ol’ dogs.

"We just looked like a nice family of dipshits."

Welcome to the Powells!

Mrs. Bachelor Girl,
Well, the jury is still out on Harper. But if she's raised by two dipshits, chances are she's going to exhibit dipshit tendencies.