I was late to work this morning, because of a traffic jam.  OK, it was my own fault, but I learned something.  I learned that the idea of “Dancing in the Street” is far better to be left to song than to be put into practice.  I hope all the car horns didn't wake anybody up.

If you saw my prior post, you know I had some big misgivings about what was about to happen.  And I was quite sure that it would take days, if not weeks, before we knew who our next president would be.  Let me be the first to admit that I was dead wrong.  And I've never been so happy to be wrong in my life.

Had we lost on election night, I was planning to go to work all Johnny Cash and be the Man in Black.  By the end of the night, I was breaking out my Hawaiian shirt and flip-flops.  Time to Par-tay! 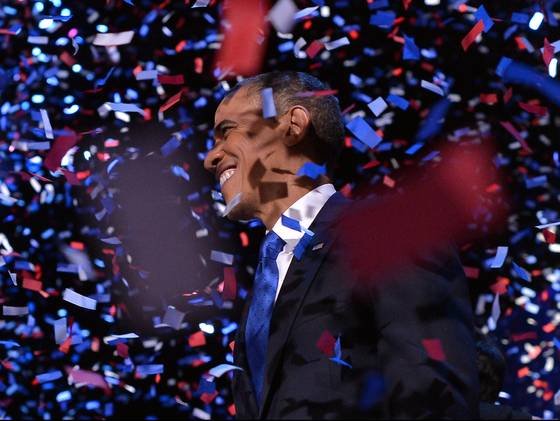 As I’m sure you know by now, President Obama was re-elected, the Democrats picked up a few seats in the Senate and held serve in the House.  The balance of power is not drastically shifted, but we have some vibrant new players on the scene, like Elizabeth Warren.  (Warren 2016?  Don’t laugh.)  We also got rid of some walking, talking anuses, like Akin and Mourdock, (Ruined their chances?  No we “rectum!”), who shouldn't be allowed anywhere near public office, just for being so goddamned ignorant.

Here in Maryland, all referendum questions passed.  The redistricting bill passed, which is good because the result of that redistricting was the ouster of a long-seated Republican from Western Maryland.  The Dream Act passed, so children of illegal immigrants, if they meet several strenuous conditions, can pay in-state tuition rates at college.

Surprisingly, the gambling expansion passed, which will allow a 6th casino to be built, and permit table games.  The money spent on that issue was staggering.

The biggest bombshell was that same-sex marriage passed, making Maryland (tied for*) the first state to approve it via popular vote.  As you may recall, this is an issue I've been talking about and promoting for years.  Passage required a lot of obstacles to be overcome, and damn if we didn't do it.  I've never been so proud of Maryland in my life.

* Same sex marriage also passed in Maine, and a constitutional amendment to ban it in Minnesota was defeated.  As of this writing, it is winning in the state of Washington, 52/48, but is too close to call.  Mailed ballots are expected to trickle in throughout the week.

I think it was a combination of a wise game plan and a change in culture that finds people now ready for it.  The biggest obstacle in Maryland was always going to be the African-American vote, which while reliably Democratic, has always been averse to accepting same-sex relationships.

In overcoming that resistance, you can’t underestimate the impact from when both President Obama and the NAACP came out in favor of same-sex marriage.  That was a boatload of clout and credibility right there.  Then they sought out the support of a couple of Baptist ministers, who cut commercial spots saying how religious protections would still be in place, and that no one had the right to make people adhere to someone else’s religious beliefs.

All the opposition could offer were the usual scare tactics… The Children, The Bible, The Children, The Slippery Slope to Bestiality and Oh My God What About the Children?  It’s my opinion that no matter what the issue, people only trot out “The Children” as a defense when they can’t win an argument on merit.

The Catholic Church was another opposition ringleader.  The local Archbishop sent a letter for required reading at Mass, urging opposition to the question.  I've heard in Comments here before that some people have priests that do their own thing and are much more in sync with today’s times.  I theorize that it is so because the pressure is off.  I’d be interested to see what would happen if a similar hot-button measure is presented in that state.  Then we’d see how much autonomy a priest really had.

Let me tell you what happened here.  One local priest read the Archbishop’s letter during Mass, but then rebutted it with his more reasoned personal beliefs; that non-Catholics needn’t be bound by Catholic tenets.   He also posted a video with a similar statement on his parish website.  Two days later, the video was taken down and replaced by a new statement about how priests needed to subvert their personal opinions to those of the Church.  He was unavailable for further comment after that.  Hand slapped, dissent suppressed, case closed.

But throughout the state, despite scare tactics and negative ads, people were able to see through the bullshit and realize that it was a basic civil rights issue, that no one should be a second class citizen simply because of the way they were born.  Forty years from now, people are going to look back on the last decade and wonder what the hell all the fuss was about.  The last ten years will look to them the same way we look at the racial strife of the 50s and 60s.  All that violent opposition, and for what?

I mean, right now, look at New York, Massachusetts, Iowa, and the others states that have same-sex marriage?  Are they all dens of sin and iniquity?  Does anyone even notice a difference?  Of course not.  Life just goes on… only there’s now a percentage of the population that enjoys the same rights as the majority.  That’s how it should be.

Obviously, the night’s top story was the re-election of President Obama.  Everyone knows that now, but what they don’t know about is my own behind-the-scenes role in it all.  You may be able to thank me, but I have to thank my buddy, Carpetbagger.

I gasped as I realized that I was missing that bullet from my arsenal.  I may have made a written case for Obama’s re-election and donated money to the cause, but I had completely forgotten my mojo responsibilities. I quickly shed the red sweat pants I was wearing and donned a blue pair.  The rest is history.  You’re welcome.

This was my first “Twitter” election and I had a real ball in using it.  I mostly stuck to CNN, with occasional flips to the local NBC affiliate to check up on the referendum issues.  I found that CNN was not as interested in being first as they were with being right.  They were rarely the first to project a winner, and some times waited hours to join their competitors.  But when they did, it sure seemed “official.”

I especially liked how they used the map to highlight the county returns and show how they justified their projections.  For example, they’d show how even though Obama was trailing overall, most of the votes were already counted for the traditionally Republican counties, where the places that went strongly Democratic still had over half the votes yet to count.

Twitter was useful in keeping me up with the other network projections.  It especially tickled me when Fox “News” would project a swing state for Obama.  That’s when I really trusted it, because I know it just killed them to have to do it.  It was especially funny when Fox projected Ohio for Obama, (and thus to win the election) and then their own pundit Karl Rove went on to criticize the projection, claiming that there was still time for Romney to pull it out.  He went on to argue with Fox’s data analysts on air.  Click that last link; it’s hilarious.

I think he was just panicking over the thought of all that cash he dropped without receiving any of the influence he so desired.  Remember, it wasn't HIS cash, it’s money he raised by making promises to others.  Now he sounds like a guy who went in big with a loan shark to bet on a “hot tip,” who later pulls up lame in the 4th race at Aquaduct.

That’s what tickles me most about this election; that the Republicans spent a fuck-ton of money on it and basically got jack-shit in return.  Every corporation that sent money to Karl Rove’s or the Koch Brothers’ PAC not only pissed their dough straight down the toilet, they also pissed off the guys that won.

Last night, the American people showed that they couldn't be bought and sold quite so easily.  As I said in the last post, money can’t buy the election out right; it can only buy the opportunity to influence your vote.  You have the ability to ignore the badgering, scare tactics and misinformation, and place your vote for those who best represent your values.  (Chances are; it’s not a human chameleon who will change his message to suit whoever he is standing in front of.)

Last night we learned that more people value the rights of humans over the supposed human rights of corporations.

So, Republicans, stick that in your PAC and smoke it.

In case you don’t follow me on Twitter, (and why on earth wouldn't you?) here’s some of what you missed.

And with that, I went to bed a very happy man.
Posted by bluzdude at 7:28 PM