My apologies for not posting Thursday night, as is my custom.  I’m off today, so I’m having a go at it this morning afternoon.  Last night I was too keyed up in anticipation of Liz Lemon’s wedding on “30 Rock.”  Actually it was kind of traumatic, because I realized that now both Tina Fey AND Liz Lemon are married.  Gah!  Even my imaginary life can’t catch a break. 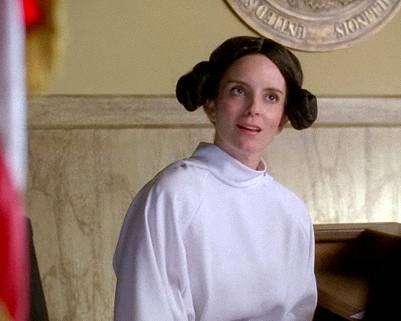 It was the only white dress she had.

A few weeks ago, I thought I’d be able to take a break from blogging politics, but even after the election, the Republicans are still acting as destructively as ever.  It starts with the dreaded Fiscal Cliff.

I mentioned in comments of an earlier post that to me, Fiscal Cliff sounds like the name of a punk band, although it would probably have to be spelled, Physcal Clyff.  (No doubt most would mispronounce it as “Physical Cliff.”)  It sounds like the combination of Rascal Flatts and Wyld Stallyns. 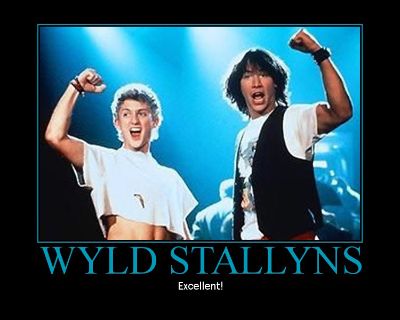 Anyway, despite President Obama winning the election by a projected 5 million votes, while campaigning on the issue of raising taxes on the Jet Set crowd, there remains a great deal of foot-dragging on the other side of the aisle.  I’m not sure if it’s all for show, to ensure they can’t be accused of “compromising” too easily with a pinko Communist Muslim Kenyan, or if they really mean it.

I think they’re still reflexively opposing everything Obama wants to do, just from force of habit.  I think there will be some kind of agreement before we hit the cliff’s edge.  The Republicans don’t want to be blamed for sinking the entire middle class by appearing to want to protect only their corporate benefactors.  But watch out for any new angle where they can protect the rich, tank the country and shuffle the blame to the Democrats.  It’s never too early to stake out the campaign issues for 2016.

It’s sad that so much of this obstinacy stems from the legendary No Tax Pledge they’ve all taken, to Grover Norquist.  He’s the guy that has systematically, over a number of years, obtained pledges from every GOP Senator and Representative, never to raise taxes under any circumstances, for anyone, by even a single cent.  This includes eliminating current loopholes and tax shelters, levying fees, or enabling any other revenue generating method.

The “hammer” is that if anyone violates the No Tax Pledge, Norquist will spend a buttload of (other people’s) money to campaign against said violator in his next election, calling him a lying, untrustworthy, flip-flopping, big government spend-monkey, or in other words, a Democrat.

Besides the general lack of backbone, what irks me is that they’ve all taken this pledge to a single guy rather than pledging to do what’s right for the good of the country.  I mean, who the hell is this guy anyway, to hold the rest of us hostage?  He’s never run for anything or earned a single vote.  He’s just another corporate stooge who’s looking out for his own interest and that of his rich friends.  Fuck.  Him.

I think there’s a simple campaign to counteract this clown.  Granted, it will take money to get it out there, and that’s probably a pretty big obstacle.  But a candidate could counter that it’s going to have to take both increasing revenue AND cutting back on some sacred cows and take a reasonable look at spending, in order to get the deficit back under control.  There is no magic bullet or accounting trick that will handle so big a task.  This candidate should boldly state that he’s NOT going to sacrifice the well being of every American just to protect the precious few who have managed to enrich themselves on the backs of the middle class.  He should talk numbers and hammer the income gap between the 2% and the rest of us.  It can be done; all that’s needed is some backbone.

The other conservative prong of attack is to vilify Susan Rice for the assault on our embassy in Libya.  As I wrote in prior posts, this is a purely political play.  There were a whole fistful of American Embassy attacks that resulted in lives lost, during the Bush years, but we never heard a peep about them.  Now the GOP is falling all over themselves to blame this ambassador for going on the Sunday news shows and relaying details about the situation, as provided the CIA and White House.

The goal of all this heavy-duty smearing is to keep Ms. Rice from becoming the next Secretary of State, when Hilary Clinton steps down.  And it doesn’t really even have anything to do with Rice!  The real tipoff that it’s all about politics is how they keep shilling for John Kerry to be appointed.

You remember John Kerry… he was the guy the Republicans crucified during the 2004 election.  They called him an un-American, traitor, Commie, hippy coward and made up horrible lies about his military and public service record.  And now they think he’d make a good Secretary of State?  When were they full of shit, in 2004 or now?  Can’t have it both ways.

But see, the reason they want Kerry at State is he would have to give up his seat in the Senate, where Scott Brown could run again.  This time, he wouldn’t be campaigning against the populist juggernaut that was Elizabeth Warren, or Kerry himself.  This way the GOP can reclaim a Senate seat and displace a powerful senator without having to actually defeat him.

I’m not sure what good a single senator is going to do them, but it’s a start.

Now, I don’t know who the best person would be for Secretary of State; there’s bound to be a lot of behind-the-scenes dirt on everyone.  To me, though, the Secretary of State does the President’s bidding.  The message will be the same, regardless of who delivers it.  The Senate is where laws are made and a single senator can wield considerable power, especially an experienced one.  I’d prefer to build on the progress made in the last election and try to get something done for the good of the country.

So who to put at State?  I’d almost suggest another try with Colin Powell, but I think his credibility is shot, after the Iraq War debacle.  But I have a better idea.  We need someone that by his mere presence says that this shit has got to stop or else things are going to get dangerous.  And I have the perfect man for the job… 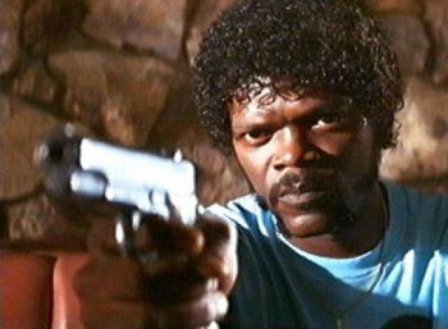 “When you absolutely, positively have to kill every mutha fucka in the room.”

Director’s DVD Commentary: Yes, I know the quote is from a different movie than the picture… so sue me.

Holiday Guide to Yinzer Lingo
I saw this on PittGirl’s Pittsburgh Magazine article last week and it cracked me right the hell up.  If you’re not from The Burgh, consider this as kind of a visitor’s guide to our fair city, including our peculiar lingo.  The accents are especially thick… that’s probably what I like the most about it.  They probably should have subtitled it.  Because I’m not too proud to blatantly steal something I find elsewhere, I now present to you the Twelve Days of Pittsburgh N’at.