First thing I need you to do is leave this post right now and go read my prior post, by either scrolling down or clicking here.  It’s a story about the time I had to take a lie detector test… not as a demonstration, but to clear me of a possible crime.  Not that it has anything to do with this post, it’s just that it’s a good story and no one has read it.  Seriously… I’ll wait.

Pocket Review: The Amazing Spiderman
When I first heard that they were remaking Spiderman and covering the original story, I couldn't believe it.  I mean, the Spiderman movie with Tobey Maguire only came out 10 years ago… do we really need a remake already?

I was dead set against seeing it.  However, seeing the trailer for it, when I was at the movies this summer, pried my mind open a little bit.  It looked cheeky and very exciting.  So when it came out on Blu-Ray last week, I bought it.

Turns out, it was a good call.  While it’s essentially the same “origin” story, they tweaked it enough that it wasn't just a copy of what had already been filmed in 2002.  The action was good and the CGI wasn't nearly as noticeable as it was in the first film.  (They also used more of a real guy swinging from a wire in order to use less of the CGI.)

I also liked the female lead, Gwen Stacey, (played by Emma Stone), who was much more than a damsel in distress.  She was the intellectual equal of Peter Parker and helped him as much as he helped her.  The dialog between the two snapped and crackled like this morning’s Rice Krispies.

So if you like the “comic book movie” genre, give it a shot.  Even if you liked the last three Spiderman movies, there’s no reason not to see this one.  I’ll be interested to see how they progress the series from here.

The Hostess with the Mostest
It’s cracking me up seeing everyone lose their minds about Hostess going out of business.  People are buying up Twinkies and Ho-hos as if their childhoods couldn't be relived without them.

My siblings and I pretty much missed the whole Hostess thing.  Hostess snacks never graced our pantry nor our lunch bags.  All I could do was look longingly at my classmates as they snarfed up their Wonder Bread sandwiches and crème-filled Twinkies, while I ate my little box of raisins.

Twinkies were OK, but I never got hooked on them… I was much more interested in obtaining Pop Tarts, which were another verboten treat.  Every so often, I’d get a Twinkie out of a vending machine, just to satisfy my rebellious side, but they weren't that great.  Other than that, it was Little Debbie who was more of a presence in our household.  Boy, that little tart could bake some mean-ass brownies.

But there was a time, as a young adult, when I ate Hostess Fruit Pies like they were going out of style.  Man, I loved the cherry and lemon ones.

I know that graphics have changed, but this is the package I remember.

I’d still eat those things by the truckload, if they weren't so high in calories.  You could tell by the weight of the package that a fruit pie would fill you up between meals.  It had “heft.”

Anyway, I don’t think there’s any reason for America’s sugar junkies to panic.  I’m sure someone will buy the rights to produce our cherished goodies.  There’s too much money to be made.  In fact, this may just be a hoax after all.  Maybe Hostess just needed to clear some room on the nations 7-11 shelves, for some new product.

Unleash the Pointless Investigations!
I can’t really take the GOP “outrage” over the Benghazi attack seriously.  I think they've decided their strategy for the next four years is going to be endless, pointless investigation of every blip in the geopolitical world.  In other words, they’re going to “Clinton” the president to death.  Benghazi and Patraeus are just the beginning.

Remember all the outrage over the seven fatal incidents at US Embassies during the Bush years?  Of course you don’t, because there wasn't any. 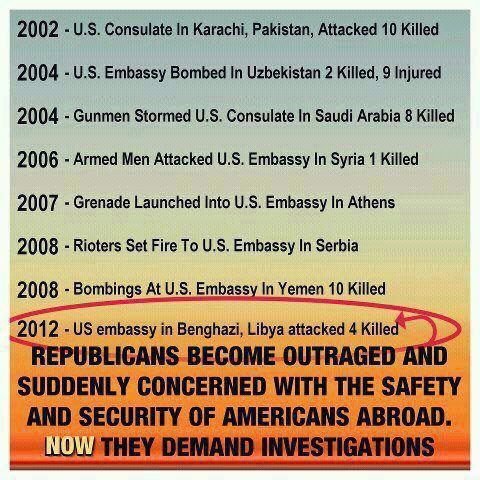 The GOP knows that as long as they’re monopolizing the press by pointing fingers at Obama, nobody is talking about their own toxic message that got their asses kicked in the November elections.  When in doubt, shift the blame.

Ratbird Stew
One of the Steelers two biggest games of the year is coming up, when they play the Ratbirds on Sunday night.  (The other one is the 2nd time they play the Rats, two games later.)  Before last week’s game, I was expecting a Steelers win against the Rats tomorrow and a loss two weeks later when they play in Baltimore.  But that was before QB Ben Roethlisberger got knocked out of the Chiefs game with a separated sterno-clavicular joint and a dislocated first rib.  The way things look, he’s going to be out for quite a while.

The Steelers are 0-4 against the Ratties when Ben isn't playing.  I think it’s going to take a heroic effort on everyone’s part, especially the Steeler defense, if they are to win on Sunday.  Personally, I doubt it.  I mean, I’ll still be rocking my game-day mojo, but I’m not expecting any miracles. 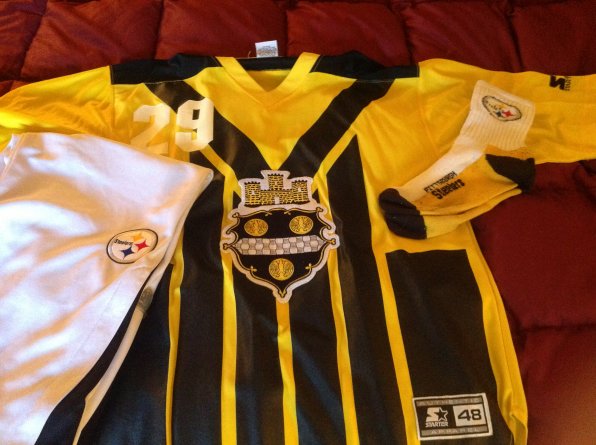 The Steelers are going with their 1934 “jailbreak” throwbacks, so I’m wearing my 1933 “butt-ugly” throwback, with white Steelers sweat pants and Steelers socks.

I was going to wear it to work on Friday for jersey day (aka Purple Friday, for those that aren't me), but since I knew I was going to wear it for the game, I declined.  I haven’t had much success when wearing the same jersey on both Friday and Sunday.  Good thing I have my spreadsheet to check these things out. 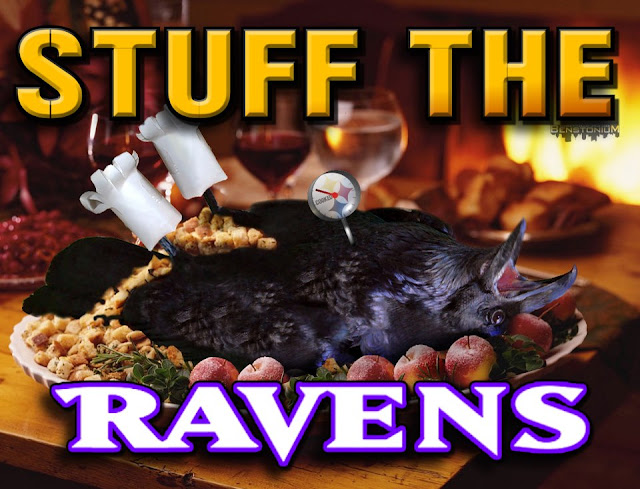 If you like the Steelers, you should check me out on Twitter, during the game by following me at @DarwinfishBluz.  I’ll be dropping my keen strategic observations, making fun of the Ratbirds, complaining about our quarterback and insulting the announcers.  (OK, maybe not much of the latter… Michaels and Collinsworth do a good job.)  It’ll be just like watching the game with friends at the bar, only without the noise, peeing and beer breath.
Posted by bluzdude at 2:01 PM