OK, Internet, you win.  I saw your requirement that every blogger do a post about what they’re thankful for, so I will comply.  And that has nothing to do with my trying to come up with a suitable topic for today’s post.  Plus… I have it pretty good.

Today I am thankful for…

…Having people around with whom I can celebrate holidays.  That wasn't always the case, when I lived in cities that were far from any family members.  The fact that I can go to my brother’s house for Thanksgiving and Christmas gives me comfort and joy beyond measure.  Which brings me to…

…Having two practically perfect nephews.  Daniel (13) and Sam (7) are the best kids I’ve ever met.  They’re polite, whip-smart, well behaved and always at least act as if they’re happy to see me.  I can sit and talk with them for hours and the time just seems to evaporate.

…Having both parents still around, with whom I can yak with and receive their sage counsel.  A lot of people my age can’t say that.  I enjoy just hanging out with them, when I can.  It’s always a lot of fun.  Just think of all the crazy stories about them I've told you… Realize that all the goofball stuff that I'VE done is likely the result of their ongoing influence.

…Having clear memories of all four grandparents.  As I learned when I spoke at Pinky’s assisted living facility, a great many people have no memory of their grandparents, due either to estrangement or early deaths.  I was 11 when my first grandma died, so I was old enough that I still have many wonderful memories of her.  Plus, I still have my paternal grandfather, who will turn 97 this February.  The guy is a freak of nature and is as tough as the day is long.  I’m thankful that I have his genes rambling around in me somewhere.

…Having a Pinky in my life, who takes amazing care of me.  Even when she’s driving me bugshit crazy, I have to admit that she takes a lot off my plate and runs the everyday business of our lives.  It’s hard to believe I’ve been with her longer than anyone else, ever.  All I can say is that she has amazing tolerance.  I’m not the easiest person to put up with on a daily basis 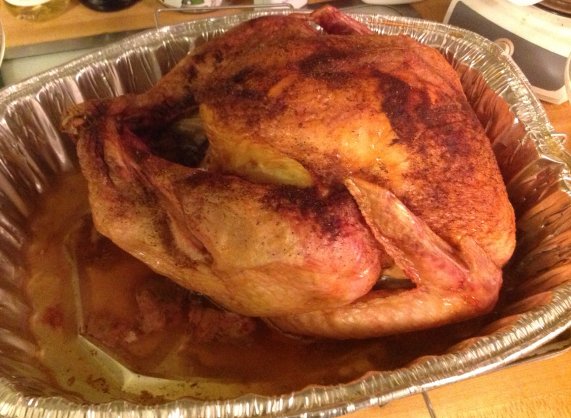 Oh, and she makes a pretty mean turkey, too!

…Having a job I love for the last 15 years (in March).  While there have been ups and downs along the way, I've generally worked with some great people and made some wonderful friends.  Right now, I love my boss, I love my co-workers and I don’t have to wear a name tag!  Even though my company is still up for sale, meaning I can’t necessarily expect that things will continue as is, I’m ridiculously happy there.  There are zillions of people, employed or not, that can’t say the same thing.

...Having a couple of life-long friends who are always there for me.  I don't make guy friends easily... good thing I met these guys early on in life.  They've been there ever since.  I know if I was ever in trouble, they would be here in a heartbeat  (and vice versa). 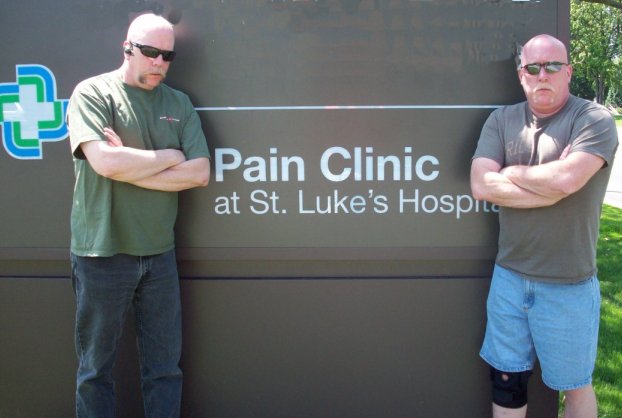 Don't give me any trouble... Would YOU want to have to answer to these two?

…Having generally good health.  After having heart surgeries in 2002 and 2007, I maintain a steady beat with very few spells of arrhythmia.  Even my hives (Delayed Pressure Urticaria) seem to be on hold lately.  Ever since the weather turned in September, the hives have ceased to be a problem.  I’m not saying they’re gone; I still get the lumps on my body from time to time.

I got them on my knees after kneeling down to go through a low-level shelf.  And I got them on my forearms from extended use of an iron armrest.  But they weren't really bad in either place.  But on my hands, where they tend to be the most painful… nothing.  I can push a shopping cart, noodle with my guitar or carve a turkey, without any hives popping up the next day.  All of those activities usually generate itchy, swollen hands.

Maybe it’s just the change of seasons… the hives are always worst in the summer.  But still, I’ve had the problem in past winters, especially when scraping my windshield.  So I have hope that this weird condition of mine might have finally run its course.

…Having teams to root for that are generally competitive.  I can count on the Steelers and Penguins being in the thick of a playoff chase, year in and year out.  The Buckeyes have been on an incredible run of winning football, and “bowl-eligible” or not, they’re still a formidable team this year.  And even the Orioles made the playoffs.  The Pirates… well, OK, they gave us hope right up through August, which lasted several months longer than they’re usually relevant.

It’s so much more fun to be a fan of teams that aren't mathematically eliminated by the halfway point of their seasons.  Imagine rooting for a city’s teams where a winning season is an anomaly (Cleveland) and all you have to look forward to every year is the inevitable disappointment.

…Having people actually use their computers, on purpose, to come see what I have to say.  I’m so thankful that you take the time out of your day to come here and check in with me and my random bullshit.  I’m especially thankful for those of you that participate via comments.  That way, I know what you think, as opposed to when I examine my StatCounter data and assign you your opinions.  (Yay!  They agree with me again!)  And I'm especially, especially thankful for those whom I've gotten to meet in real life, some recently, others not so recent.  Getting to know these people has been a joy and their friendship means the world to me.  Thank you for encouraging my behavior.

Somehow, the winding path of my life has brought me to this happy place.  Everything’s OK.  I’m as content as I've ever been with what’s going on around here, so like I said,I have it pretty good.  My Thanksgiving wish is that you have the same good fortune.

Happy Thanksgiving, my friend.  Hope to see you again this weekend…
Posted by bluzdude at 12:35 PM