Big doin’s afoot this weekend, which make for good jumping off points for a couple of stories.  But first…

The Game
Today is the annual clash between Ohio State and Michigan. 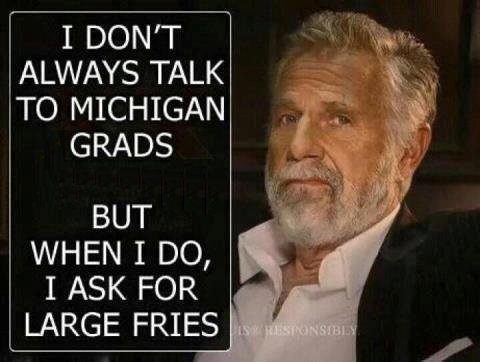 Having learned college football while growing up in Ohio, our family has always considered this to be the biggest college game of the year.  In fact my brother and nephew are on their way to Columbus for the game right now.  It will be the boy’s first Michigan game and he told me how excited he was to be going.  His father (the OSU grad) has obviously raised him properly. 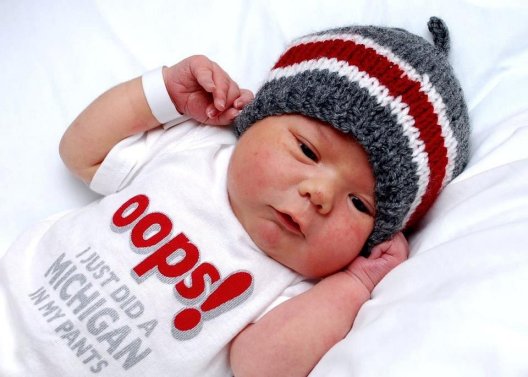 All I can say is that if the high school in Red Dawn had been named for the Buckeyes instead of the Wolverines, they would have mopped up the invading army in twice the time.

Or on the other hand, they might have spent so much time getting tattooed; they might never have even noticed the invasion.

Brown Out
The other big game for us is the Steelers/Browns game on Sunday.  This will be the first Steelers game all year that isn't on local TV, so I’ll be off to the sports bar tomorrow, with my wing-man, Sitcom Kelly.  (When you’re done here, check out her most recent post!)

FYI, because I’ll be at the bar, I won’t be Live-Tweeting the game.  I don’t want to risk spilling beer on my iPad.  OK, I never spill a drop, but I don’t trust Sitcom Kelly.

The other day, my blog friend Val at Flying Platypi told an embarrassing story about being on the road and really having to “GO.”

It reminded me of a similar story from one of our many road trips from Toledo to Cleveland for the annual Steelers game.  I wrote a post about them back in 2009, so if you've never seen it, do click the link… it’ll be worth your while.  (Lots of vintage Steelers pictures!)  But this is one story I didn't include.

By the end of our tenure in Ohio, Dad was buying maybe 30 tickets to the game for our friends and neighbors, and we’d caravan our way across the Ohio turnpike to Cleveland.  One year, my buddy John and I rode in the back of my sister’s boyfriend’s pickup truck.  (It had a cap over the bed.)  We brought along a 6-pack to split and made ourselves comfortable.

Before too long, though, I had to pee.  Normally, I would have just rapped on the back window and had the driver pull over, either at a rest stop or somewhere beside some bushes.  But since he didn't really know where he was going, he had to stick with the caravan.  And in this age before cell phones, there was no way to communicate with the rest of the cars.  So I had to tough it out.

Some guys would have just flopped it over the back gate and let it fly.  I was much too modest for that.  I can’t even pee when there’s someone standing at the urinal beside me.  I was beginning to consider how I might pee out one of the little gaps between the tailgate and the side of the truck bed.  But every time I worked up the courage to try it, we’d pass someone.  I didn't have the heart to leave pee mist all over some unsuspecting driver’s windshield, so I ended up holding it all the way to the hotel.

By the time we arrived, I was in severe pain.  In fact when we pulled up out front and I crawled out of the bed, I couldn't even stand up straight.  I shuffled into the hotel lobby like Quasi-freakin-Modo, desperately looking for the men’s room.  Probably took me five solid minutes to empty, because any elasticity in my bladder was long gone, having been stretched beyond recognition.

Stick a Fork in Him, He’s Done
This has been a total turkey week, all week long.  Not only did I have turkey on Thanksgiving (at my brother’s house), Pinky made one last Sunday.  That turkey picture I used in the last post?  That was it.  The shot was taken long before I assaulted it with a knife.

It’s my job to carve the turkey.  After last year, I was determined to get myself an electric carving knife, but I promptly forgot about it.  I have some decent knives, but it’s just easier with the electric one.  I can’t get the nice sandwich slices; once I start to cut, I always end up with hunks that break away.

The problem this year was that I couldn't find my big fork… you know… the one you use to hold the bird steady?  I've had this old plastic set for years… a spatula, ladle, serving spoon and fork.  Everything else was present and accounted for, so where’s the fork?

I tore through our utensil drawer, grumbling the whole time.

“Where’s the damned fork?  I didn't leave it anywhere… I always put things back where they belong!  When was the last time you used it?  Where else could it be??  Dammit dammit dammit…”

I ended up using a regular silverware fork and it didn't go well.  The pan slid around the counter, the bird slid around the pan and my hand cramped up from holding the little fork so tightly.  And it’s really hard to hold a fork steadily when you have turkey juice on your hands.

So we had our “chunky-style” turkey and all was well.  It was delicious.  Cut to Monday morning, as I swung my legs out of bed and looked down at my bedside table. 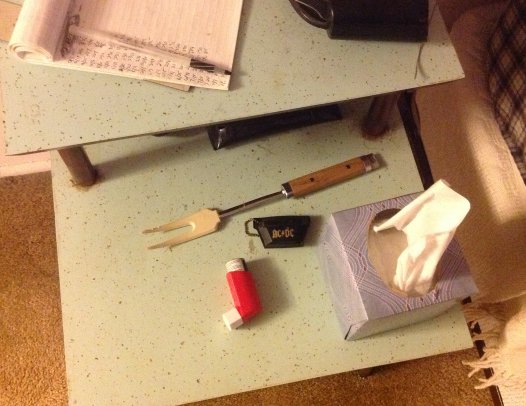 I totally forgot that several months earlier, I’d been having this problem with getting an itch at night, between my shoulder blades.  I put the fork there within easy reach, so I could get a scratch at night without having to get out of bed.  (Otherwise, I’d have to get up and rub up against the door frame, like a bear on a tree.)  The fork had been there so long, I didn't really even see it any more.  Idiot.

I’m off Monday, and the day’s chore will be getting my ass out to the store for an electric carving knife and a new serving fork.  And I probably owe Pinky an apology.
Posted by bluzdude at 10:44 AM