I read today that the Japanese Ambassador was talking politics with the US Ambassador’s wife.  She said to him, “And when was the last time you had an election?”

He stammered and said, “Before blekfast.”

That’s my sole attempt at election humor for the day.  I’m too nervous to produce any real yuks on this tense occasion.  By the end of the night,* half the country will be elated and the other half will be despondent/enraged/suicidal.  All I can do is hope I’m not in the latter class.  Screw the rest of them.

* I am asterisking the “end of the night” bit because I’m quite sure it’s going to take a while before we have a winner.  I was tempted to take Wednesday off and stay up late into the night, to wait for the state-by-state returns.  I decided not to do so, because if ever there was an election that was bound to end with recounts and legal challenges, it’s this one.  The GOP has already been working for the last couple years to suppress likely Democratic voters; the polling places, staffing, and ballot accounting are their last firewalls against the unwashed liberal hordes.  So I’ll just have to show up tomorrow with a hangover, one way or another.

Entirely too much money has been spent to re-install the Republicans for them to allow it to be wasted.  Voting machine glitches have already surfaced in Pennsylvania, where hitting the Obama section of the voting touch-screen triggered a vote for Romney.  Maybe it’s just a faulty screen, maybe not.  I trust no one from a state government that just had their “voter fraud” countermeasures thrown out in court, because they would disenfranchise hundreds of thousands of voters.  They know there’s more than one way to skin a “Kenyan.”

The money… oh Lordy, look at how much money has been spent on this election.  Can you imagine the number of jobs that could have been created if all the cash spent on this election had been used differently?  How many roads or schools could have been built?  How many policemen and firemen hired?  Or if you still believe in debt reduction when your own guy is in charge, how much could be taken off the deficit?  (A hell of a lot more than by defunding PBS and Planned Parenthood, I’ll tell you that much…) 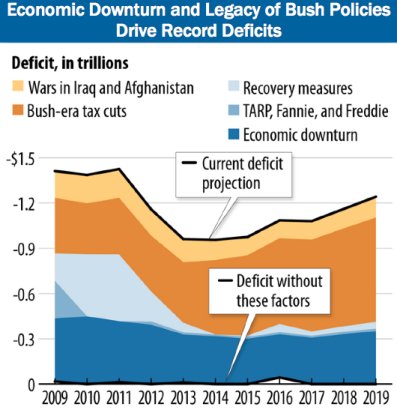 But the money?  The only thing these power brokers can buy is the opportunity to persuade you how to vote.  If you can think for yourself and determine your own direction based on your own values, the effect of all that dough is massively diminished.

Unfortunately, this is America, where flash and style trump depth and nuance.  After reading online and televised comments from the general public, I can only conclude that the nation’s critical thinking skills are somewhere between a rabid squirrel and a pissed off badger.  We, as a country, believe whatever plays to our original biases.  When “facts” become debatable, we are in serious danger of ceasing to be a rational nation.

So I sit here, today, quite worried for the fate of our country.  If Romney wins, it’s not just him that scares me.  I mean, he’s a rich, privileged, douche canoe, sure, but I don’t think he’s evil.  I’m worried about the cast of characters that rushes back into office with him.  Remember that during the Bush years; they were all very busy packing the governmental infrastructure with conservatives.  Obama didn't go in there and sweep them all out, because in theory, they weren't supposed to be “political” appointments.  They’re like sleeper cells now, going through the motions until they can be reactivated by a Romney administration. 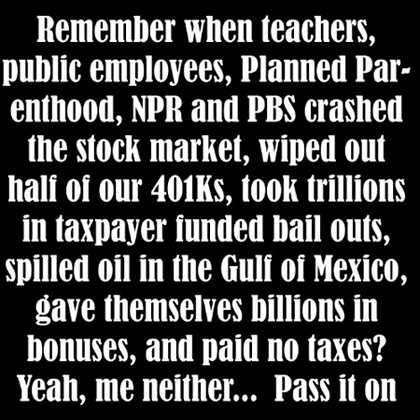 And aside from them, there’s all the other industry CEOs that will fly back to town, to resume the task of gutting the regulations from their respective industries and rewriting much more business friendly (and consumer and environmentally hostile) versions.  The Karl Roves will come back out of the shadows to pull the puppet strings once again.

Rove, as you may know, collected billions for his Super PAC, to prop up GOP campaigns all over the country.  The money was given from all the huge corporations that have skin in the game.  Because of the Citizens United ruling, it’s perfectly legal… immoral and conscienceless, but legal.

The thing with the money is; there’s always a catch.  You don’t think these companies are forking over millions just for the hell of it, do you?  Obviously, they expect something in return.  They expect the Republicans to tailor all policies and regulations to benefit businesses over the rest of us.  They are simply bought and paid for. 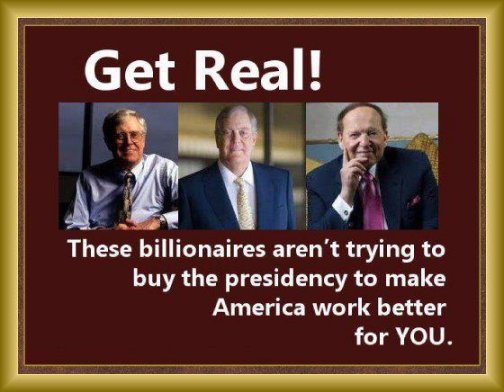 Yes, yes, the Democrats have some big donors too.  A couple.  The GOP always points to George Soros, and various movie moguls.  The thing is; guys like Soros are donating money to a party that will cost them more money.  They are giving with the goal of benefiting the entire country rather than protecting their own narrow self-interest.  That’s a huge philosophical difference.

So it’s no wonder the Dems are always getting outspent.  It’s been miraculous that they've even been able to keep it close.  But again, education defeats money.  All it takes is a developed skill to identify flawed logic and faulty arguments.  Which we suck at doing.  Shit. 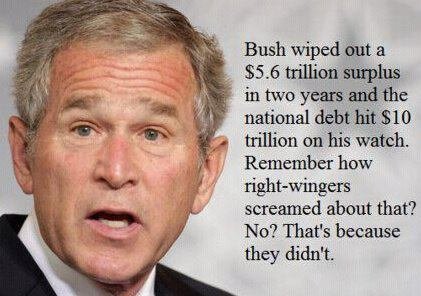 The Republican rallying cry has been “Take our country back.”  As Baltimore Sun columnist Dan Rodricks pointed out this morning, they’re “suggesting that the country has been in the hands of some foreign “other” rather than a man who received nearly 70 million votes in 2008.  That’s 10 million more than his opponent, and a margin of popular victory nearly 3 times greater that GW Bush’s over Kerry in 2004.

Remember that Karl Rove called the second Bush win a mandate, and a clear indication that conservatism had become the dominant political creed.  He said, “Those who oppose this agenda are in a difficult position. They’re attempting to block reforms to systems that almost every serious-minded person concedes need reform. …That’s not a good place to be in American politics.”

Did anyone hear about any “mandates” from the GOP after Obama won?  Hardly.  They immediately set out to block every attempted fix he made, all the while working to assign him the blame for every lousy metric.

It’s frustrating because if I was running the Democratic campaign, I’d be trumpeting “Republican Obstruction” at every speech and in every commercial.  They complain about nothing getting done all the while acting to ensure nothing gets done.  Americans don’t like dirty pool.  It would work. 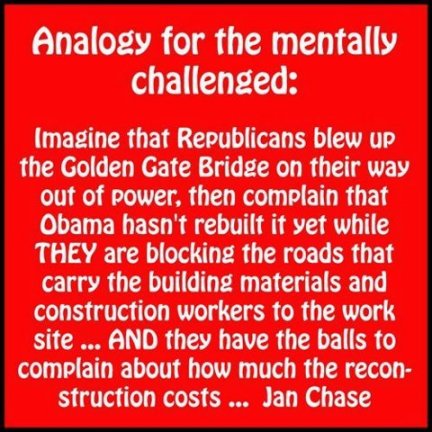 Anyway, I’m veering off course here and I've already covered this ground.  Today, I just wanted to write about my immense unease with this whole election.  So much is at stake.  A win for Romney is a win for Big Money.  We, with Little or Average Money, will get squashed again, while the upper crust continues their treasure bath. 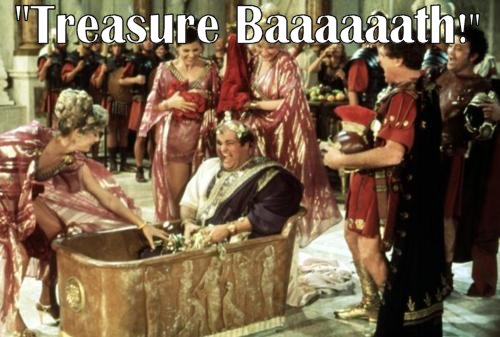 I was heartened, this year, by the efforts to actually fact check the campaigns.  It was really unprecedented.  On TV, in the papers and online, I could easily find breakdowns of which claims were true, partially true, out of context, or just plain bullshit.  The trick has been getting people to believe it, or even care.  Tonight will tell if the effort made a difference.

I feel like I've at least done my part.  I never wanted this to be a purely political blog, but I certainly intended to address politics.  Obviously I have an opinion and an agenda and this is the means to get it out there.  All along, I've tried to provide backup for my assertions and at least maintain a sense of reasonableness, while still being somewhat entertaining.

Elections are about values… yours versus those who want you to put them in office.  What I want to do is highlight the underlying values behind the issues, so that you get a good sense of what you’re voting for.

For the most part, I know I mostly preach to the choir here, so I never thought I was doing much to change minds.  I’m happy if I can help others articulate some points when their private conversations turn to current affairs.  If I can provide you some ammo when arguing with Uncle Ralph across the picnic table, I call it a win. 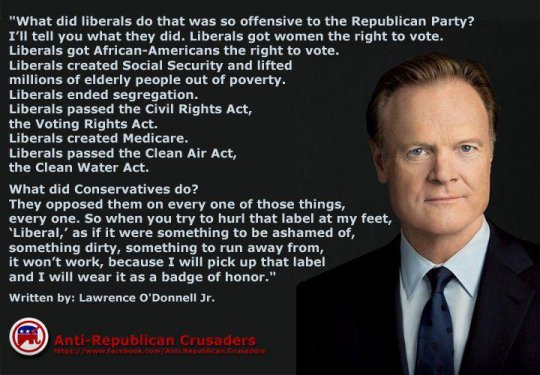 This afternoon, I got a hint that this all may have been worthwhile.  As you may have seen from his comment, my dad sent my last Election Summation post out to select friends and family.  Today, he forwarded me an email he received from his sister:

“Well you will be happy to know that I voted for Obama.  I was on the fence, back and forth, but it was Bluz’s blog that pushed me over. Happy TV watching tonight.”

One mind: changed.  That’s all a dude can ask for.  See you on the other side. 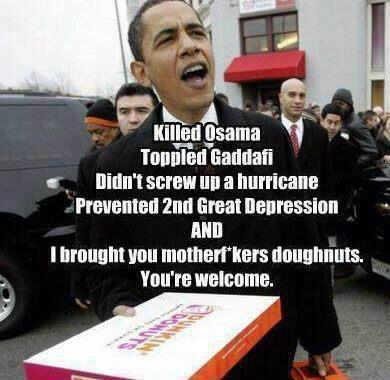