I don’t have a single coherent topic to discuss today, so we’ll have to make do with a couple of smaller ones. 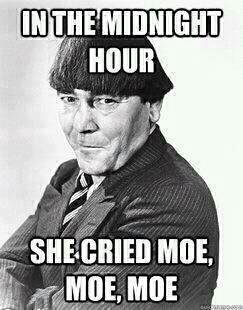 Billy Idol must have gotten the song wrong.  This way is better.

If at First You Don’t Secede… Please Reconsider
All the talk about people signing online petitions urging their states to secede is cracking me up.  Talk about Stooges…

While the phenomenon has been reported all over the country, it’s tending to be concentrated in the South.  (Go figure.)  All these bastions of Amurkan Exceptionalism and the glory of the old red, white and blue, want to turn tail as soon as they don’t get their way.  The portion of the country that crucified the Dixie Chicks for daring to speak ill of the (idiot) president now wants to disown the country the claimed to revere.  It’s no longer the Tea Party, it’s the I’m Taking My Ball and Going Home Party.

I say, do it!  Go!  Secede now and good riddance.  This would be the easiest way to repair our gene pool, lower teenage pregnancy, raise literacy and raise America’s collective IQ.  Of course the Jerry Springer Show will lose 80% of its guests, but I can live with that. 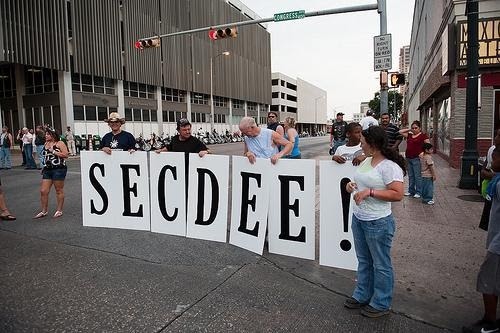 But can we please keep Louisiana?  They’ve got Mardi Gras, jambalya, fan boats, drive-thru daiquiris, and I don’t want Jessica to have to get a passport just to visit Cassie again.  Because it will be surrounded by several other secessionist states, hence cut off from the rest of us, Louisiana can be our Alaska, only with gators instead of bears.

Maybe the unhappy conservatives won’t secede at all, they’ll just make good on their threats to leave the country.  I’ve got the perfect destination for them… 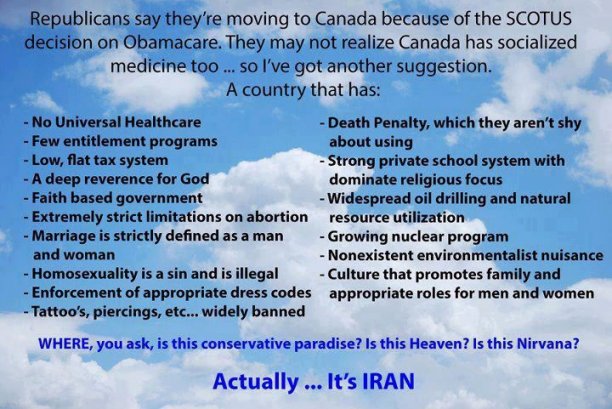 Fork Me
In my prior post, I wrote about how I needed to go out and buy an electric carving knife and a large serving fork.  (Trust me, it was fascinating, if not a bit disturbing.)

I was off yesterday, so I added that to the list of errands for the day.  I thought I had a nice, efficient trip planned, but it basically turned into a daylong clusterfuck.

CF #1: Getting gas.  This shouldn't have been any trouble, but the gas pump wouldn't take my credit card.  (It’s one of those Visas sponsored by the gas station, which gets me a rebate or .08 off per gallon.)  Anyway, it said I had to go see the cashier.

The problem with that was that I wanted to fill up, so I didn't know exactly how much to ask for.  I took a stab at $50 and hoped for the best.  But then when I went back out, it still wouldn't work.  So I go back in the station again.  By this time, there was another customer that was having the same problem on another pump.  The guy came out and basically kept pushing buttons and jiggling the handle like it was a toilet the charged by the gallon, until the pump sprang to life.

Unfortunately, it sprang to life at the non-discounted price.  I pointed it out to the cashier, who in his limited English, intimated that I’d pushed the wrong buttons on the keypad inside.  I hadn’t, but not wanting to spend the rest of my day arguing at a gas pump, I said “screw it,” and just paid the higher pump price.  (I mean, it would have come to a savings of $1.12 overall.)  Pissed me off though, because the $50 came up just short of filling the tank.  That meant I wouldn’t be able to calculate my mileage since my last fill-up, nor after my next.

CF #2: I had an appointment to get a new contact lens prescription at 1:00 and I had been hoping to stop in for some Wendy’s beforehand, but due to spending an extra 10 minutes trying to buy gas, I wouldn't be able to get there in time.  At my next destination, I wanted to get my eyes checked, pick up my electric knife and fork, and do some other shopping for Christmas presents and groceries.  You know where I can do all that?  Walmart, of course.

Yes, I know, I should hate going to Wally’s, what with their being the kings of employee mistreatment and all, but hey, I want my one-stop shopping.

By the way, when Pinky learned I was going there for contacts, a knife and a fork, she naturally requested that I also pick up about 11,000 more things, hence the groceries.

The eye test went fine… It’s no secret that I really need bifocals now, and contacts just don’t work very well for both distance and close-up vision.  The doctor is trying a thing where my right eye is keyed for distance, and my left is for close-up.  I have to try this variation for a week before I order the lens stock.  It’s kind of weird because as I look around, everything to my left is blurry, like I need to get a new lens.  And I keep walking in circles to the right.  This explains a lot about old people.

CF #3: My next objective was to procure my new utensils, but this proved to be as elusive to me as clear vision.  I couldn't believe that in a place as big as Wally’s, they had neither an electric knife OR a big serving fork.  I mean, for Pete’s sake… they had an assortment of knives that would make Jack the Ripper envious.  I think that’s a “thing” now… especially for those that watch all the cooking shows.  They have to have enough knives to do a circus act.

And what’s with the forks?  They had rows and rows of spoons, ladles, tongs, strainers, and spatulas, but no goddamn forks??  I wondered if someone had put his eye out with a serving fork, so now it had become the culinary equivalent of the lawn dart.  I mean; there wasn’t even an empty hook where the forks used to be.

I circled the kitchen appliance aisles for 15 minutes and couldn’t find squat.  So all told, I went to pick up contact lenses and a knife and fork.  I left with $167 worth of groceries, no lenses, no knife, and no fork.  Fork’n A…

CF #4: Even checking out was an adventure.  I thought I’d hit the jackpot when I found a register that had one lady with half a cart of groceries already rung and bagged, with an other half to go.  There was one more guy with about 20 items, then me.

FIFTEEN MINUTES LATER, we hadn’t moved an inch.  The lady had 4 or 5 of these WIC checks, and there was apparently some kind of involved procedure necessary, where the casher looked at an item, examined the fine print on a WIC check, scanned the item and then discussed the situation with the customer.

I don’t blame the lady for using the WIC checks, but there has to be a more efficient way of conducting the transaction.  This was just mind-numbing.  I wanted to tell the guy that rolled up behind me, “Run!  Run for your life!  This is the Black Hole of Walmart, it’s Purgatory on Earth!”

At least there weren’t any screaming kids in the vicinity.  (If there had been, it was fortunate that I couldn’t find my big fork.  I’da used it, real good.)

CF #5: Later, as I pondered my fate while eating a delicious Baconator burger at Wendy’s, I realized that I should probably try my luck at Target, which happened to be right nearby.  But when I got there, I had the same problem… rows and rows of every utensil, but no forks.  And no electric knives.  But WAIT!  There it is!  I found a single steel serving fork, down at the end of the row of hooks.  The trip wouldn't be a total loss.  (And I wouldn't have to turn in the “back-scratching fork” from my nightstand.)

I eventually spotted a Target worker and asked about the electric knives.  I hope he wasn’t too startled by the big, loud, wild-eyed guy, stomping around his department, waving a giant metal fork.  He couldn’t find the electric knives either, but he called around.  The word came back that they were in with the crock pots.

Really?  What the hell is up with that?  All kitchen things with a plug get lumped in together?  Made no sense to me.  And I’d been through that aisle too, without finding anything.  But armed with the knowledge that they were supposed to be there, I found a couple boxes jammed in between two rows of crock pots.

And the kicker is… the electric knife comes with a big metal fork. 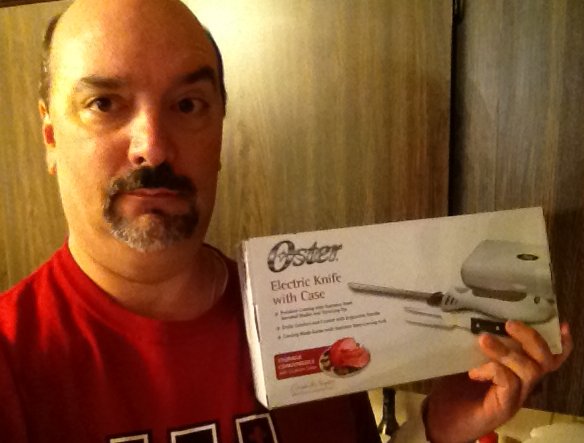 Now I just have to wait for Pinky to make something that needs carving.  I’ll probably treat it the way a kid treats a new toy… The first month I’ll use it at every opportunity… on ham, roasts, pizza, sandwiches, pickles, egg salad…  By the end of the next month, it will either be broken or I won’t know where it is.  (But I’ll be sure to check the nightstand before I blame Pinky.)
Posted by bluzdude at 8:39 PM