If I May be Perfectly Prank

The Famous Binder Scam is a variation on an old trick.  You may remember they even featured it on an episode of MASH, when Hawkeye and BJ kept switching Winchester’s uniform with one of an incrementally smaller size.  The tightening uniform convinced him he was rapidly gaining weight and the two pranksters took it upon themselves to “train” Winchester so that he may shed the excess “weight.”  After they got him back to his regular uniform, they left the episode with plans to start making him “taller.”

I know this gag predates MASH, because my mom tells me that her father (The Storyteller) did something similar, back when he was an office worker.  Grandpa’s prank was that every day or so, he’s slip a strip of tissue into the inside hat-band of his buddy’s fedora, so that he’d think his head was getting bigger.  (Obviously this was way back when people still dressed up to go to work and wore nice hats.)

I love these kinds of pranks that play out over time.  It must be an inherited trait, I suppose.

Redneck Man (RM) had the same appreciation as I did.  We usually avoided pranking each other… the cost of a pranking war between us would have been way too high, in terms of office destruction, mayhem and collateral damage.  But I did get him once…

I had to fill in on a project for him when he was on vacation.  I had to sit at his desk and use his PC for it because he was the only one that had the appropriate desktop application.

The thing about this job was that it took forever for the application to process.  You’d type in some data, hit enter, then have to sit and wait like 30 seconds while it processed.

Sitting at someone else’s desk for numerous 30-second increments with nothing to do can tempt even the best of us.

In the weeks leading up to this point, there had been an email circulating the Internet about some guy that dialed a wrong number by accident and the callee was very rude.  The guy then made it his business to call that number back every so often and call him a jackass.  It went on from there, but I bring this up because after reading this email, RM and I started referring to each other as “Jackass.” 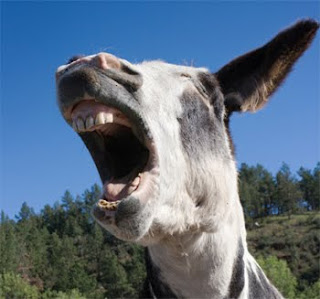 So I’m sitting there in RM’s cube, alternately working and enduring forced 30-second intervals of idleness.  I spotted a fresh batch of Post-Its on the desk and in a fit of inspiration, wrote “Jackass” on one of them and stuck it on his wall.

At the next idle interval, I stuck a “Jackass” on one of his binders.  The next thing you know, I was putting a “Jackass” everywhere… on his book covers, his box of cereal, under his phone handpiece… anywhere that wasn’t immediately visible.  I went into his Rolodex, wrote “Jackass” on a card and filed it under “J”.  My favorite one was when I pulled out the tape on his 10-key adding machine, wrote “Jackass” on the paper and rolled it back down.

It took months before RM ever found them all.  Every time he thought he found the last one, another would turn up a week later.  It was a beautiful thing.

I never really get pranked much.  When I sense a prankster in our midst, I usually drop a few stories of some of the things I’ve done as a kind of pre-emptive strike.  I let them know what I’m capable of, in case they ever get the idea that I would make a good target, that retribution would be swift and terrible.

There was one time, though, when someone did pull something.  Someone stole the Super Bowl XL commemorative Terrible Towel that I have up in my cube. 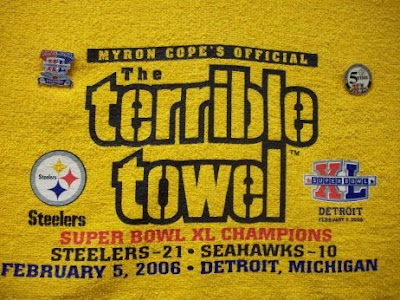 Losing the towel didn’t bother me so much as losing the “I Was There” SBXL pin that was attached to it.  I could always get another towel.  I could NOT replace that pin. 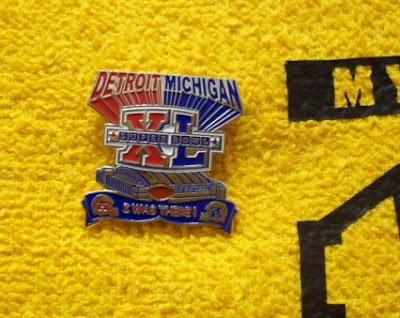 It didn’t seem like a prank at first.  I just thought someone ripped me off, probably some degenerate criminal Ratbirds fan.  I notified our building security and had them review tapes, but there was no evidence of anything suspicious.  Ray Lewis was no where in sight.

I figured out who took it a couple days later.  One of the guys I ate lunch with, a guy who was more a friend of my other lunch companion than one of mine, grabbed it up just to yank me around.  I always thought he was a douchebag, but put up with him for my friend’s sake.

I knew it was him because he was the only one to ask me, every freakin’ day, if I’d found anything out about my Terrible Towel.  I told my other lunch companion of my suspicions and she confirmed it was him.

I remained passive about the issue whenever Douchebag was around.  I’d answer every one of his queries about the towel with as few words as possible… unless there were others around.

Sometimes he’d say things like, “Tell so-and-so about what happened to your Terrible Towel.”

And I’d answer “Some needle-dicked little pussy-boy thought it would be funny to steal the towel off my wall… Probably some idiot that thinks that’s the height of creativity.”

I figure he’d probably already told the so-and-so’s about what he’d done so all involved would know who I’m talking about, but none could say anything.

Shortly after that, I found an interoffice envelope on my chair that contained a Xerox copy of my towel.  Oh, hilarious.

If he had any actual style, he should have sent pictures of the towel in various dangerous places, like about to be flushed down the toilet.

Again, I didn’t react, even under more prodding.

“Find that towel yet?”

Then one day I came back to my cube from my boss’s (adjoining) cube and there it was, tossed over my desk chair.  Douchebag had went to the other cube that abutted mine and tossed it over.  I guess he got bored.

But I got my towel back.

I began using that strategy with all my dealings with him.

He usually had something coarse to say about the Steelers, something you would normally hear on a 4th grade playground.  One day as I sat down to lunch, he made some reference to Hines Ward being Korean by saying something about “Hello Kitty” (which is popular in East Asia.)

I didn’t even acknowledge he was there.

He must have thought he was being quite clever because he said, “Nothing?  No reaction?”

I said, “Obviously you’ve grossly overestimated the degree to which I give a shit about anything you have to say.”

I didn’t hear too much more from Douchebag after that.  My other lunch friend left the company soon after, so Douchebag and I didn’t have much reason to interact any more, which left me to do my crossword puzzles in peace.
Posted by bluzdude at 7:33 PM