Prank You Very Much

Blogger friend Cracker Lilo had a post yesterday about playing office pranks on April Fools Day, and describes some pretty good ones she’s done.  I have to give her high marks.  In “Comments” she sought other tales of workplace tomfoolery.  I was tempted, but figure I have more than enough material for my own post.  I did leave a comment about some pranks I came up with, but never actually did, so go check it out when you’re done here.

I’ve always loved playing pranks, especially in the workplace.  You may remember my learning the central tenet of Bluz Pranking Philosophy, as described in “A Fish Story”, that says, “the best way to get even when someone pranks you is to make it look like it worked too well.”

Someday, I’ll have to do a post on all the pranks and cons I’ve pulled during my “off hours”, but today I want to tell you about a couple of good ones I’ve gotten off at my current place of employment.

When I first started, there was a girl that worked here named “Diane.”  She apparently lived by a completely different principle.  She was the master of what I call, "The Diane Effect” was that whenever someone pulled something on her, she would, by her own inadvertent actions, make the prank far worse than it was ever set up to be. 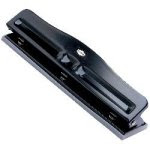 My first Diane story all started with 3-hole punch holes.  You know those things that put 3 holes in paper so that you can put them in 3-ring binders?  Well, I had a lot of punching to do to set up a whole stack of documents in binders and by the time I was done, I checked the “reservoir” at the bottom of the punch and saw quite a little batch of the punched out holes.

Figuring I could have some fun with these, I tipped them into my hand and then subtly dumped them into Diane’s coat pocket as I walked by.

When she got her coat on to go home, she found them right away, and for some unknown reason, blamed me immediately.

Not ready to cop to it yet, I denied everything.  It went something like this:

“Sure, Diane, that’s all I have to do around here is save up 3-hole punch holes just so I can torment you.”

She didn’t really buy it, but couldn’t prove otherwise either, so that was that.  Except that it got me thinking, “What if I DID start saving up all the holes?  I could really do something then…”

So for the next year or so, I emptied my 3-hole punch compartment into a coffee mug in my desk drawer… just waiting and amassing my stockpile.  (I had a lot of ongoing punching and filing to do.)

Sadly, Diane gave her notice, which put me on notice that I’d better act fast if I wanted my planning to pay off.  That opportunity came with the next rainy day.  I saw Diane’s umbrella sitting at her unattended desk, so I snuck up and emptied the whole Mug’O Holes into the umbrella, then tied it all back up.  I figured she’d step out of the building when she left for the day and get a harmless little confetti shower.  “Ha-ha, very funny, Bluz.”

The next day, Diane came into work and walked right up to my desk and just stood there staring holes into my chest.  (Again, she just assumes it was me!)  Then, without even taking her coat off, she told everyone the story of what happened the night before:

“After work last night, I had to go straight over to my fiancé’s parents’ house for dinner.  By the time I pulled up out front, it was pouring down rain.  So I opened the car door a crack, put my umbrella out and opened it up.  When I opened the umbrella, guess what happened?”

I had a hard time pretending I didn’t know what was going to happen, but I managed.

“I’ll tell you what happened… 75 zillion little 3-hole punch holes came pouring out in my face.  The wind that was blowing sent all those holes into my face, all through my hair and inside my car, and the sheets of rain coming down made sure that everything stuck there.

“When I finally got up to the house, my future father-in-law was standing there in front of the window with tears in his eyes and told me he hadn’t laughed so hard in years.”

See?  That’s the Diane Effect.  I didn’t mean for all that to happen, but her actions made it worse than anything I could have planned.  I still maintained I had nothing to do with it, but I’m pretty sure she didn’t believe me.  Because by this time, she knew the kinds of things I was capable of.  Like at our Christmas party 5 months earlier…

First of all, at that time, we didn’t have voice mail… the Office Manager didn’t believe in it.  (Not like not believing in Santa Claus or dinosaurs, she just didn’t like it.)  So all our phones were programmed to roll to someone else who then had to answer and take a message.

Whenever Diane had to go to the bathroom, she’d always tell me where she was going and to take messages.  I’d always say, “OK, I’ll tell them you’re in the bathroom.”

Eventually, whenever she’d tell me she was going to a meeting or to another floor, I’d say, ““OK, I’ll tell them you’re in the bathroom.”  I actually did it a couple of times, when I knew the caller well.  I’d tell them that when Diane called them back, to ask if she got to the bathroom in time.

My desk neighbor, Bruce, was privy to all of this and usually got a good laugh out of it.

With Christmas approaching, Management decided we would do a Secret Santa gift exchange at our department Christmas Party Politically Correct Winter Holiday Party.  I asked Bruce, “How about if I wrapped up a roll of toilet paper to give to Diane?” 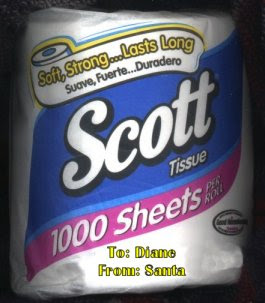 Bruce was onboard, as he usually was when it was someone else taking the risk.  So I went out and bought a single roll of Scott Tissue and wrapped it up all pretty, with a tag just saying it was for her.  There was no attempt to hide what it was… it looked completely like a roll of TP.

The morning of the party, I put it on her desk before she got in.  I figured she’d see it and be like, “Goddammit, bluz, what the hell is wrong with you?”

Diane came in that morning and saw it and said, “Oh, I got my Secret Santa gift,” took it up to the front table and put it with the rest of the Secret Santa presents collecting there.

The Diane Effect appears, once again.  I wasn't her Secret Santa, so there should have been another present for her.

Bruce and I looked at each other… “Oh, jeez, this is going to be good.”

I suppose I could have called her aside and had her remove it, but heck, where’s the Politically Correct Winter Holiday spirit in that?  We decided to let it play out.

After we had our communal lunch, our Executive Vice President came down to preside over the festivities.  Diane began handing out the Secret Santa presents.  I opened mine but was really keeping an eye on Diane.

Finally, she sat down and grabbed her mystery present.  Almost immediately after she began opening it, she realized what it was, gasped and quickly started tucking it away behind her.

Suddenly, our EVP piped up, “Hey Diane, whatcha got there?”

She hemmed and hawed; trying to find a graceful way out, but the EVP insisted she show everyone her present.  He wasn’t trying to be mean; he just wanted her to participate.

She had no choice but to hold up her new roll of Scott Tissue and then explain to everyone why it was given to her.

I thought Bruce was going to hurt himself laughing.  He was an older guy and usually pretty taciturn, but he just howled.  As did the whole room, I guess, including the EVP.

This was the Diane Effect at its finest.  I couldn’t possibly have planned for that turn of events.

I don’t know how she ever forgave me.  Can’t imagine why she ever left the company…

But when she did, I had to find a new target.  And one turned up shortly after, but those are stories for next time.
Posted by bluzdude at 3:46 PM