If You Want Blood, You Got It

We had an event at work today where in honor of the upcoming Preakness Stakes, we were allowed to wear jeans and were encouraged to wear black, yellow and red, as a reflection of the colors in the Maryland flag.  If you’ve never seen the Maryland flag, it’s pretty trippy.

The red and white part signify puzzle pieces that don’t fit together (like the Ravens) and the black and gold part signifies how the Steelers are so far inside the Ravens’ heads, they actually have it on the flag.*

I couldn’t believe my good fortune!  They’re actually encouraging ME to wear black and gold?  I only have, like 75-THOUSAND black and gold Steelers shirts to choose from.  So since it was a beautiful, sunny spring day, I chose my sunniest, flaming-yellowest Steelers polo shirt, with black and white stripes on the shoulder.

My only lack was something red, so I opted to wear a Pirates hat that had a black cap and red bill.  That would be good for coming and going, but wouldn’t be very helpful during the day.  We're not supposed to wear hats in the building because my company has a policy against looking like a punk at work.

But I also knew that I was slated to donate blood today, as part of another company event.  If I really wanted to fit in and appear to be the complete Company Man, I could ask them to make it messy, so that the blood on my arm and bandage could fulfill the “red” requirement.

I used to donate blood all the time.  When I was in high school and college, my friends and I donated blood every chance we got.  We had several reasons:

1) It helped people and was the Right Thing to Do.
2) We got to leave school during the day to do it.
3) We figured we could get drunk on much less beer if we had less blood.

Note: These reasons do not necessarily appear in order of importance to us.

My buddy Rik (The Chairman of Fuck Off) and I used to race to see who could squeeze out a pint the fastest.  (Competitive much?)  I think my best time was four and a half minutes.  But then they made me stop doing sit-ups during the blood draw.

I even wrote a blazing article for the school paper, urging everyone to give blood, extolling the virtues of blood donation.  (On advice from our faculty advisor, I omitted reason #3 above.)  I also took the wind out of the most common excuses for not giving.  There’s nothing like the righteousness of youth.

After I got out of college, (and once I got the coveted “Gold Pin” for making the Gallon Club), I never gave blood again.  It wasn’t really a conscious decision… I was just busy trying to make a living and I never had that much of a convenient opportunity.  Then after my heart surgeries, I was pretty damned tired of being stuck with needles every time I turned around.

But I’d been thinking about it more lately and my company is making it pretty easy.  They set up a mobile Red Cross center down in the cafeteria and all we have to do is sign up and stroll downstairs when it’s time.  Half-hour, and done.  Anyway, that ended up being today.

One thing I learned is that they ask a hell of a lot more questions now, than they did in 1980.  I’m a pretty knowledgeable guy and they were asking me about diseases I haven’t even heard of.  But I figure, if I haven’t heard of it, it’s pretty unlikely that I have it.  So let’s do this!

One thing that cracked me up is that they had the carpeting all covered with sheets of plastic.  It was like something out of “Dexter!”  Heaven forbid there’s some kind of serious accident where blood is shooting out all over the place.  They’d be like, “Oh my God!  The carpet!  We should have covered the carpet!”

Luckily, there’s never any drama when it comes to getting blood out of me.  I have the biggest, juiciest inside elbow vein you ever wanna see.  Drunk, blind nurses on crack can hit that thing from across the room, throwing syringes like English darts.  (Drunk, Blind Nurses on Crack should be a punk band name.)

Another thing new was that they drew on me.  I’ve never had anyone mark me up before injecting, cutting or poking, but there’s a first time for everything. 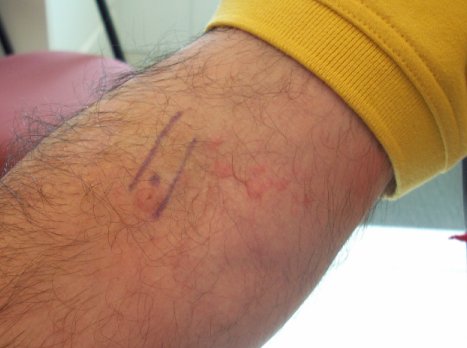 I imagine that the parallel lines represent the path of the vein, so that they can get the right angle.  I know that they actually stuck me right below the dot.  I probably should have thanked them for not giving me ink poisoning.

So they got me set up, iodined, drawn on and poked pretty quickly.  They had a big digital clock set up in view of the beds so that we could give the spongy thing a squeeze every 5 seconds.  (And I thought I was going to get to relax…)  But because the clock was right there, I can tell you that I can still deliver the blood in stellar time.  Even 30 years later, it still took less than 5 minutes to fill my pint.  (I don’t even empty a pint that fast.)

After I was done, she gave me my instructions… Leave the cotton on for 5 hours, leave the “elbow brace” bandage on for 1 hour, no drinking alcohol for 8 hours…  Gah!

With a panicked look, I checked my watch, making the phlebotomist laugh.  (Hell yeah, I know what they’re called.)  Luckily most of the 8 hours would elapse during work.

But the best part?  The bandage that they criss-crossed over my elbow was bright red!  There’s my red trim for Maryland Flag Outfit/Preakness Day! 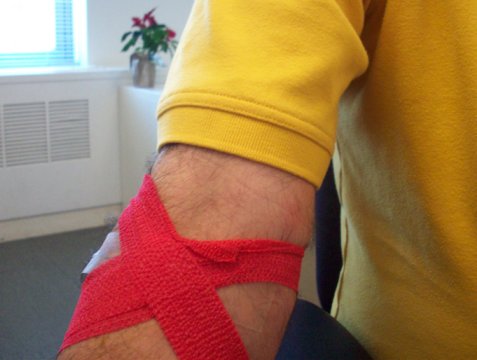 I left it on for most of the day.  It looked like a gang sign or something.  When I went out for lunch, I expected the Crips to roll up on me all, “Yo, wass up, old white boieeeeeee?”

RIP
While I was having lunch, I heard some bad news… Disco Queen Donna Summer passed away this morning at the age of 63.

There goes another touchstone of my youth.  Donna Summer’s music was inescapable during my late high school/early college years.  Sure, “disco sucked,” but at least hers was quality stuff.  She had a great look, a great beat and great pipes.  Hers were the songs I actually enjoyed dancing to when I’d be out at the clubs.

My favorite memory of her isn’t even real.  Have you ever seen the movie “The Full Monty?”  For the unfamiliar, it’s a movie about 5 ordinary Englishmen who decide to put on a male revue in their working-class town, and doing it completely naked, or as it’s called, giving them the “Full Monty.”  One of the songs they rehearsed was Donna Summer’s “Hot Stuff.”

Anyway, there’s a scene when the guys have had a quarrel and called off their performance.  They’re all standing among everyone else in the unemployment line when “Hot Stuff” comes on over the radio.  Next thing you know, slowly but surely, and almost by accident, they all start going through their moves.  It’s a brilliant sight gag.  Here, see for yourself…

Before tonight, I haven’t seen this in probably 10 years and I swear, I’m sitting here laughing my head off.

If Donna Summer can make my clumsy ass, and those of these 5 blokes look good, she must have really had something.

Safe on, Miss Summer.  You were definitely Hot Stuff.

*Click here for the factual meaning behind the MD flag. It is also the picture source.
Posted by bluzdude at 7:40 PM