I was going to leave my recap at that, because there’s really not much more to say about it. The Steelers played around with the Chumps and they made a chump out of us in overtime, 27-24.

* The Steelers didn’t wait around before imploding on special teams because the Chiefs returned the opening kickoff for a touchdown. Welcome to Kansas City!

* In one of the Steelers many gag-inducing miscues, William Mike Wallace granted freedom to the football after catching what should have been a first down pass. 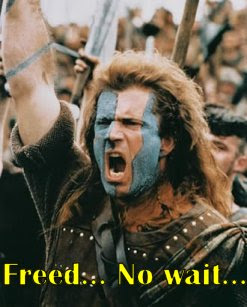 * Heath Miller (HEATH???) had a ball smack off his hands, up into the air and into the hands of a Chief. Gah! You know it’s a bad omen when that guy drops a pass. It just doesn’t happen.

* The game wasn’t without highlights though… Ben did a great job an a couple plays by shrugging off the rush and completing passes downfield, including TDs to Hines and Heath.


* But then there was also the interception in the end zone. And a total defensive collapse in the 4th quarter and overtime. The offensive line was suddenly getting overrun and Ben was faced with one jailbreak after another. The game was there to win at any number of points and the Steelers just didn’t get it done.

* Luckily the Ratbirds lost too, in excruciating fashion, to the Colts. At least I shouldn’t have to listen to any grief from the locals.

I could go on, but I just don’t have anything amusing to say. We blew an eminently winnable game to a 2-7 team. That’s something championship teams don’t do. We will never beat the Rats next week with an effort like that. And that’s just unacceptable.

No more use for the K-Mart gear at Jilly’s. Will have to go back to the drawing board if I have to go out for any more games.