Even More Odd Bits - The Sequel

My brother sent me a YouTube video the other day, that showed the reactions of various people gathered in bars and such across the country, to the game winning goal the Americans scored in their World Cup game against Algeria.

I’d intended to watch the next game the US played, Saturday at 2:30, but watching the video made me think that maybe I should go out to see it, instead of sitting at home by myself.  Why not make it an event?
So I went down to my local watering hole, Jilly’s, where I usually go whenever the Steelers aren’t on local TV.  I thought the place would be packed, but I thought wrong.  I sat down on an empty side of the bar, but soon moved to an empty chair on the other side.  I could see a young couple sitting there… the girl had a little American flag with her.  I figured these people would be fun and might even know something about soccer.
I’m not really a soccer fan… they didn’t have youth soccer when I was a kid… or if they did, it was just a haven for kids that weren’t coordinated enough to hit a baseball.  So I don’t really know anything about it, but I know that the World Cup is a very big deal.  I figure it’s like watching the Olympics… I don’t know anything about the finer points of the luge, but I know enough to root loudly for the U.S.A.
It turns out that my young friends both played soccer, so they helped me a great deal with the rules.  (Besides “kick the ball in the net.”  I get that part.)
In talking about the food at Jilly’s, I mentioned that I go there any time “my team” in football isn’t on local TV.  I didn’t want to here a bunch of shit from Ravens fans about Ben Roethlisberger, I just wanted to watch the soccer game, so that’s why I didn’t volunteer my affiliation.  But of course, they asked, so I had to answer.
When I said, “The Steelers,” their eyes lit up like Christmas trees…
“Oh my God, we just moved here from Harrisburg!”
They were fans of both the Steelers and the Penguins.  Like I always say, “we’re everywhere.”
The USA may have lost the game in agonizing fashion, but I now have 2 new friends to watch the game with when I have to venture outside my living room to see my Steelers.
Another Night at the Yard
Sitcom Kelly and I went to see the Orioles again on Thursday night.  We sat in the same seats we were in the last time we went; 10 rows behind home plate.  Only this time, there was no rain.  Remember when I said the last time, there would be nights when we wished it was 50 and drizzling?  This was one of those nights.  The high temperature Thursday was in the high 90s.
Actually, we kind of lucked out.  We weren’t in the sun at all and there was some air moving.  Also, it was Adam Jones Mini-Bobblehead Night. 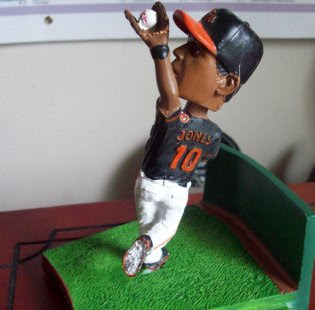 Perhaps if the O’s were doing better, they could afford a regular-sized bobblehead giveaway.  Although I may have discovered a reason for their under-whelming season… their centerfielder is playing in orthopedic shoes. 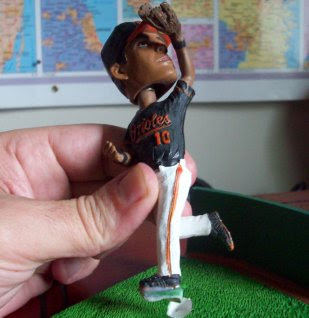 The second I took it out of the box, it came apart, revealing the unusual footwear.  I guess the Orioles can’t afford high quality glue, either.
Anyway, we had a good time, and the Orioles actually came from 3 runs down to win 11-5.  It’s a start, but still a long way out of the basement.
McCrystal Balls
I’m by no means any kind of military expert or strategist, but you’d have to think that on the first day of “Generals School,” someone would come in there and say, “Hey, don’t disparage the Commander In Fucking Chief to god-damned Rolling Stone Magazine!”
What the hell was he thinking, even allowing access?  Was he trying to get the hell out of that useless hellhole with its unsolvable problems?  Maybe he was just crazy like a fox.
It’s not like he was a favorite in the White House in the first place after his attempts to publicly box the President into committing more troops for a longer time period, back when Obama was trying to reach a decision on a course of action.
And I’m still glad we have a President that gathers information, seeks opinions and formulates a strategy based on all information at hand, as opposed to one that thinks with his nutsack and goes with his gut.  It’s EXACTLY what we need in the White House.
I subscribed to Rolling Stone for years, up until around 2000.  I was hitting a bit of magazine overload and had to cut down some.  Once I was out of the music business, I really didn’t need Rolling Stone around as much.  All they seemed to be doing was covering bands I either didn’t like or couldn’t relate to.  Or they’d be all over some old dinosaur bands I never liked in the first place.
I almost cancelled my subscription on them a couple times, but then they’d come out with some dazzling piece of reporting on our eroding civil rights, reproductive freedoms or the rampant political hackery going on, so I’d grant them a reprieve and re-up.
Thank Heaven for Little Girls
I originally wanted to put this bit in my last post but after further consideration, realized that it didn’t belong in with the tales of vasectomies, 9-way sex parties and lottery extravagances.
Have you ever noticed how little girls move around the room?  I noticed this when I was back in Ohio and my buddy’s granddaughter was visiting.
She didn’t exactly skip and didn’t exactly run… she would just kind of “flit” from place to place, like a butterfly would do.  It was kind of a cross between skipping and prancing. 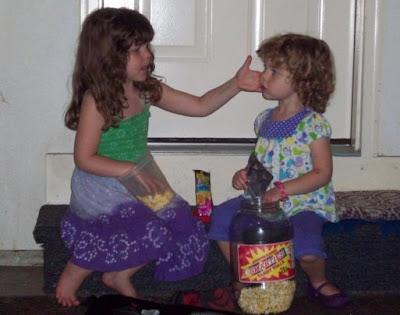 John’s granddaughter Jaidyn (L) and the neighbor girl whose name I can’t recall.
When not munching on popcorn, these two flitted all about the garage and front yard.  I’ve seen the same thing with my other buddy’s daughters as well, back when they were little.  Is it just an Ohio thing, or do all little girls “flit”?
Political Cartoon of the Moment
Again, lovingly pilfered from The First Door on the Left. 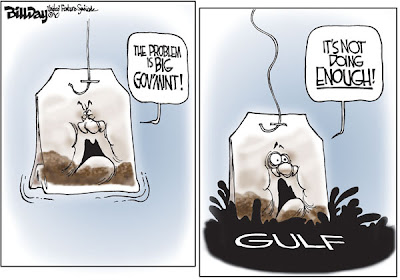