D-fish will be going dark this weekend.  I’m hanging up a sign, “Gone Fishin’”.

OK, it would probably be more accurate to hang a sign that said, “Going to the beach and laying around for four days, playing in the surf and eating and drinking like a pig.”  But the other one’s easier.

We’re heading for Amelia Island Plantation, a resort just to the northeast of Jacksonville, right up in the far northeast corner of Florida.  The reason?  Besides the aforementioned laying, playing, eating and drinking?  July 4th will be my parents’ 50th wedding anniversary.  For this occasion, my parents, my brother and his family, my sister and her husband, and Pinky and I are all getting together for a beach weekend.  That’s all my folks really wanted; the whole family together in one place. 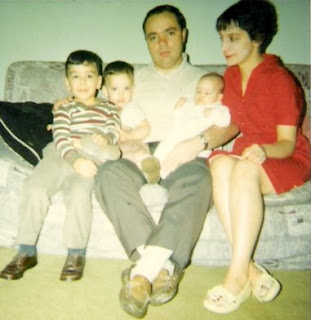 Married only 5 years, and here we all are!

We’re heading out early Friday morning and returning Tuesday.  I’d like to say I plan on dropping a post or two… my nephew is bringing his laptop, but I don’t see a situation where that happens.  But rest assured I’ll provide a full recap upon my return.

I know what you’re saying… “Your parents really got married on the 4th of July?”

Yep, they did.  Dad says they did it so that they’d always get their anniversary off work.  And you wonder where I get my “planning” compulsion…

They honeymooned up in Pennsylvania’s Pocono Mountains.  Mom says Dad spent the night throwing cherry bombs in the pool.  OK, that, I disown.  Also, Dad won the Bathing Beauty Contest, where all the newly minted husbands dressed in their wives’ clothing and had a pageant.  It’s true… I’ve seen the pictures.  Lucky for Dad, I don’t have a copy.

My parents got married pretty young… they were 21 and 20, I believe.  Five years later, we three kids show up.  A couple years later, they moved our whole motley crew out of Pittsburgh.  That meant there was no more built in support system. 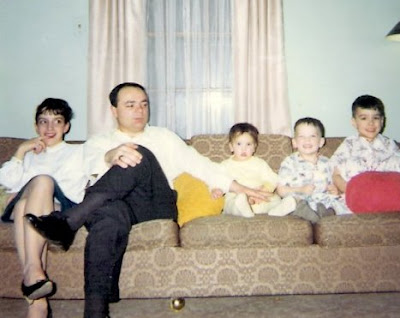 What the hell is Mom up to?  Probably just waiting to send our little asses to bed!

But that’s how we rolled.  We moved about the Midwest as my Dad saw fit, whenever he could get a job that bettered our family’s situation.  There were tough times, but nothing we kids noticed; we never wanted for anything.

Dad told me a number of years ago that for our first Christmas in Chicago, the year after we left Pittsburgh, they got us second-hand ice skates because they couldn’t afford new ones.  Dad said he’d felt guilty about that, even now.

I told him to forget about it!  I remember that Christmas and I was thrilled just to get the skates!  We never even noticed that they weren’t new.

Mom and Dad are different as night and day and the influence of both has made me the dude I am now.

Mom is the wordsmith… the teacher, the poet, the writer, the activist.  You can see the effects from my mom in every post I write.  (Even the ones about poop!  In fact, Mom gave me my first “dirty” jokes to tell.)  Mom was the Editor in Chief of every paper I ever wrote, which often led to some spirited disagreements.  Mom would point out every incomplete sentence, misspelling, clunky paragraph and incomplete thought.  I thought all of my papers could be turned in as is, always.  Remember, this was before PCs… if you had to revise; you had to retype… usually the entire goddamn paper.  Gah!

Eventually I began to learn what the hell I was doing.  Still, I remember once, long after I was on my own, I’d mailed Mom a story I’d written to see what she thought of it.  I called home about a week later and Dad answered.  I asked if Mom had read my story yet.  Dad said, “Yeah, but she’s out at the store now… she had to go get a new red pen.”

Dad… the ball-buster, the breadwinner, protector of the family, the arbiter of all disputes and layer down of the law.  Dad was the engineer… the numbers guy.  I didn’t get any of that, unfortunately, but my brother did.  But I have the need to have things make sense.  If something doesn’t work, I need to figure out why.

He didn’t like having to travel for his job, leaving his family alone, but he did what he had to do to provide.  And he was still there to coach our teams or throw a ball with us.  He taught me to seize an opportunity when it presented itself… to weigh the pros and cons and then do the right thing.

He taught me to value self-sufficiency.  With his guidance, I paid for almost all of my college degree.  I decided to go to a local college and live at home to lower the bill, but I worked part time jobs all the way through and banked ¾ of every check.  I pulled it off right up to my last semester, when I came up about $500 short.  They wrote that last check for me, but still, they got off pretty lightly with my education.  And by the end of that summer, I moved out on my own, just because I thought it was the right thing to do.  (OK, I wanted to shack up with my girlfriend too, but still…)

I only wish we could get everyone there to Florida… everyone from my generation upon whom my parents had an impact.  They were like de facto parents to all my buddies… they were the grownups that kids came to see when they had a problem that they couldn’t bring to their own parents.  Around the neighborhood, they were known as “The Oldes”, or “The Elderlies”.  They were terms of endearment and said with affection.  They had to be… hell, I’m as old now as they were when my friends were calling them The Elderlies.  (Ouch!)

But this weekend, the family is getting together to have a Wild Rumpus and for the first time in quite a while, it’s not revolving around a football game.  In fact, we’ve all been to Amelia Island before, back in 2006, when the Steelers were playing Jacksonville.  But this time, it’s just us and the beach.  And 50 years of stellar memories. 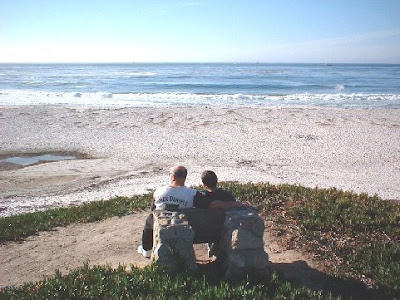