This weekend, I went to a graduation party for my nephew Daniel.  After much hard work, sweat and toil, he graduated from… 5th grade.  They had a big to-do during a church service for the entire graduating class of nine students; they got diplomas, gave speeches and offered gifts back to their school.  For passing the 5th grade.
You know what I got to do after passing 5th grade?  I got to go to 6th grade.  Whooptee freakin’ do!  Maybe I’m just a bitter old man now, but I got along just fine with only two graduations… high school and college.  What’s with the increments?
Is it really necessary that every minor or non-accomplishment that our children make requires a plaque or trophy?  Dammit, we were supposed to keep out eyes on the big prize… you graduate high school, you got the ceremony, the party, and got to be King for a Day, and tried to get laid.
It’s the same with Little League… I played a half dozen years of Little League and I was pretty good.  You know how many trophies I have?  Zero.  Nada.  Zippo.  Only the players on a team that won some kind of championship or made an all-star team got a trophy.
Now everyone gets a trophy just for playing, because we don’t want The Children to suffer from low self-esteem.  This prepares The Children for the future how?  God forbid one day they successfully make a photocopy at the office and there’s not a framed certificate waiting for them when they return.
But I didn’t really even want to talk about this.  I actually wanted to talk about the graduation itself, because I’m really proud of my nephew and he’s an amazing kid.  This was his last year at this school.  It’s a Lutheran school that only goes up to 5th grade, so next year he’s going to a Catholic school.  My parents came into town for the occasion and we all went to the service on Sunday.
That’s right… Mr. Darwinfish had to go to church.  I don’t know how the rafters didn’t come tumbling down.
Unfortunately I got stuck sitting next to my brother’s mother-in-law… his very churchy mother-in-law.  In fact, she is often referred to as “The Church Lady,” not only because she resembles the Dana Carvey SNL character physically, but in demeanor as well. 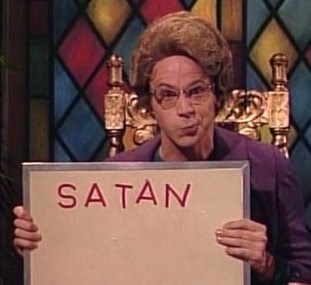 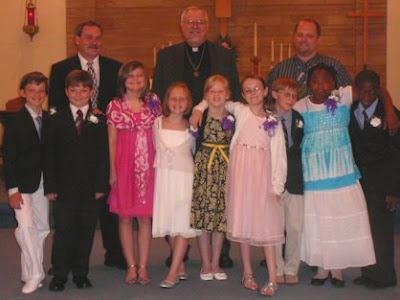 Congratulations to the 5th Grade Class of 2010.  (My nephew is on the far left.)
Eventually we escaped back to my brother’s place, where the party began in earnest and we could concentrate on the other important things in life. 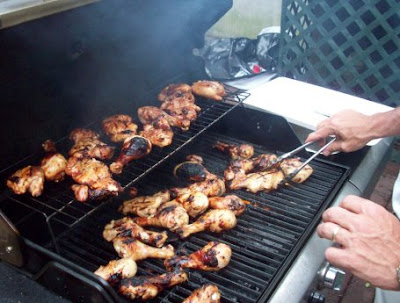 Email ThisBlogThis!Share to TwitterShare to FacebookShare to Pinterest
Labels: Bluz LIfe, The Family Business, The Glory of Meat, The Religious Right