Well, it only took 4 years, but my brother asked me to baby-sit again.  Some of you may remember my first time babysitting my nephews, as rendered in The Funniest Story Ever Written (by Me).  It was a harrowing experience because it was my first (and as of today ONLY) experience of changing a diaper.
This time, my brother Ed and his wife had a wedding to go to near DC.  Lucky for me, Sammy is four and a half, and potty-trained.  There would be no more staring down of the poo. 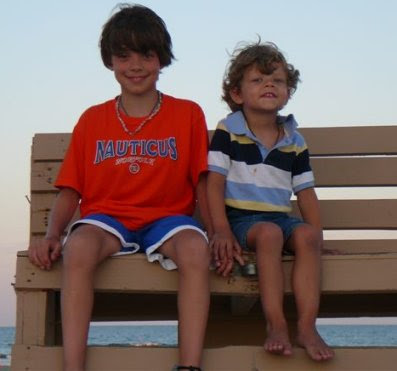 The boys in Wildwood NJ, August 2009.
When I was out at Daniel’s 5th grade graduation, two weeks ago, he got an I-Pod as a present.  When I asked what music he likes, he stunned me by saying “80’s music.”  He specifically mentioned “You Give Love a Bad Name” and “Living on a Prayer” (Bon Jovi), “Letting the Days Go By” (Talking Heads), “Rock and Roll Train” and “You Shook Me” (AC/DC), “Don’t You Want Me Baby” (Human League), “Don’t You Forget About Me” (Simple Minds).
This is where having me as an uncle pays off.  So with that song list in mind, I loaded up a thumb drive with some other tunes I thought he might like.  Mostly they were songs like the Bon Jovi and AC/DC songs, rather than the New Wavy stuff.  I told Daniel the best songs are ones played by real people using real instruments.  Synthesizers should add a little snap, not carry the entire song.  Drums should be beaten, not programmed.
Anyway, we didn’t much get around to evaluating the songs because the boys were too eager to play some Family Room Soccer.  I love how kids just make up games and rules as needed.  They decided one boy would guard a big oversized chair and that would be the goal.  The other boy would try to kick a small, soft, stuffed ball past the goalie and hit the chair.  I played some of my handpicked songs on the PC while we played, but Daniel wasn’t really in the mood to dig on the music, so I didn’t press it.  There will be time…
You would think that the age difference between the boys would have been more of a factor, (4 and 11) but Sammy proved quite adept at kicking goals past his big brother.  The smack talk was fun to watch and Sammy had the line of the night, if you can call it that.
Daniel bent down, put his hands on his knees and said to Sam, “OK, show me what you got.”
Sam then turned around, put his hands on his knees, and farted with great gusto.  (Sorry, CB... “tooted”.)  Game, set and match to the Little One.  Their “grown-up” babysitter commenced to laugh his ass off.  Then Sammy began referring to his hardest shots as his “gas kicks.”
Sammy’s other favorite expression seems to be “nuts,” as in “Watch our for my nuts”, “Don’t hit my nuts”, “I got you in the nuts.”
“He gets that from Daddy,” Daniel explained.
I cannot understate the impact that Daniel has on his little brother.  Sammy kept asking me to turn him upside down, which I do with a great flourish, before either setting him back on his feet, or dropping him on the couch.  As soon as I got him though, he’d squeal, “Daniel, save me!”
Daniel is also The Law in the house.  Occasionally Sammy would get all wound up and kick me a little too hard, or continue to punch (as we’re playing) after I’d tell him to stop.  Of course, he wouldn’t stop.  Then Daniel would look up from his laptop game and go, “Sam!  Stop it.”  Then he’d give him the look… And Sam would stop like he just got unplugged.
I was like, “I got me a Deputy!” 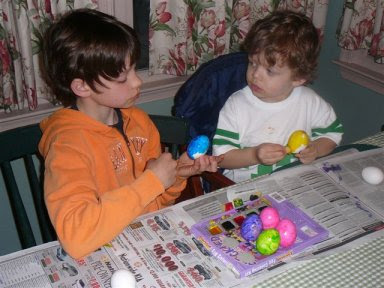 Easter, 2009
We also had some fun playing with their foam broadswords.  Best of all, every time one of us got in a good shot, we’d get to quote from the Black Knight in Holy Grail. “Your arm’s off.”  “No it isn’t… it’s just a flesh wound.”
We had a nice dinner of Stouffer’s Lasagna, which filled and satisfied.  Sure takes a while to cook though… and hour and forty minutes??  I probably should have started it a little earlier.
Nothing of consequence really happened the rest of the night.  We put on Pirates of the Caribbean about 9, Daniel played Revolutionary War-era war games on his laptop, and Sammy fell asleep on me about 10:30.  Mom and dad were home by 11:30.  The children were alive, the house was unburned and best of all, there was no poo anywhere to be seen.
I hope it doesn’t take another 4 years before I get to watch the boys again.  I figure I don’t have more than another couple years before Daniel will be able to mind the store by himself.  I think I was maybe 13 when Mom and Dad would go out to dinner and leave me in charge.  But then it was on my watch that we knocked down the Christmas tree by horsing around in the living room.  I’m pretty sure, though, that Daniel is already more responsible than I was.  I blame his father.
He never listened to me any more than Sammy does now. 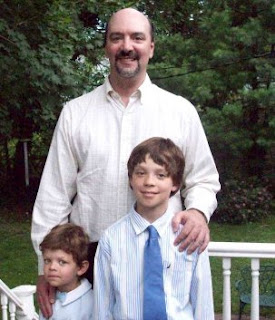 Favorite Political Cartoon of the Moment: (as collected from First Door on the Left.) 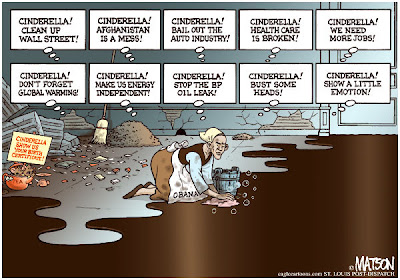