After the hard night Saturday night, the energy level was a bit lower on Sunday.  I was particularly uneasy because the Steelers were playing at 1:00 and I’d be in Podcamp.  I can’t remember the last Steelers game I missed… It may have been 5 or 6 years ago when our company Christmas party was on the same night as the Steelers and Browns played a Thursday night game.

Regardless, game day Mojo was still in effect.  Since the Steelers were away, I chose a white Steelers polo shirt.  It turned out that they actually wore black during the game, but there was nothing I could do about it at that point. 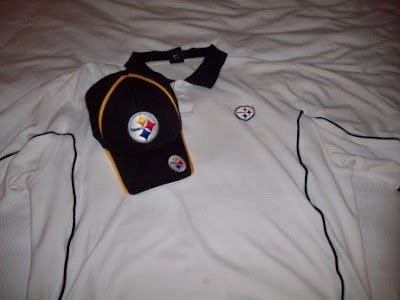 It was kind of an unfortunate choice to have to photograph a white shirt on a white bedspread, but that’s the way it goes, sometimes.

There was lots of other Steelers Mojo at Podcamp thought… I spotted at least a half dozen people wearing their game jerseys.

My first session consisted of Joe and Betsy, from Joeandbetsy.com, talking about their experience being newlyweds and blogging about trying a different thing every day.  They were adorable and had a very sweet story.

After that, it was Video Podcasting 101.  This was more nuts and bolts on how to start posting video online.  It was geared more toward doing a series than the occasional one-off video posting.  Still, I have some ideas kicking around so I wanted to see if it entailed anything I hadn’t considered.  Plus, Sitcom Kelly really wants to produce some videos, so one of us ought to know what we’re doing.  I don’t think she realizes just how much freakin’ work it would be (to do it right, anyway).

Lunch was great… several giant 50-piece boxes of fried chicken.  Mmmmmmm!  I also had some good lunchtime conversation with some fellow Podcampers that I hadn’t previously met.  I guess that’s how it’s supposed to work, huh?

My 1:00 session was supposed to be Video Podcasting 201.  That was also when the Steelers game kicked off.  My plan was to blow off my session, not only because of the game, but I thought that my scant needs were covered pretty well by the 101 session.  There were TVs down in the lobby, where lunch was, and I assumed that they would have the game on.  This proved not to be the case.  The TVs were on some kind of timer and manually changing the channel on them did not work.  As I paced around the emptying lunch lobby, in walked the Carpetbagger, complete with an update on the game.  He also had his SmartPhone set up to receive play by play updates.  Now, we’re talking!

So we shot the breeze and tracked the game until 2:00, when we both went to another session on creating online videos.  This one was geared more toward content rather than how to do it.  I got some excellent guidance from that one, while still keeping an eye on the Bagger’s phone updates

At 3:00, we mustered back at The Hub for closing comments.  It was here that someone mentioned the existence of a feature called Google Goggles.  I immediately wondered what it would sound like if someone looked up Lady Gaga on it.

Admit it… you’re all trying to say “Lady Gaga Google Goggles” 3 times fast, aren’t you?  I know I was.

By 3:10, Carpetbagger and I were streaming out into the streets in search of the closest bar we could find that had the game on.  Minutes later, we found the Courthouse Tavern, which had the Steelers game as well as several others up on the screens.  That was a good a place as any to commence drinking, and in my case, begin moaning about all the picks for the week I was losing.  We got to see the 4th quarter and then hung around to see the beginnings of the late games.

The Steelers game was a real slugfest; I’m really bummed that I missed it.  They won ugly, with just enough offense and a crushing defense.  Troy Polamalu executed the play of the season so far, when he leapt over the lineman right at the snap and landed on the QB before he had barely pulled out from under center.  Dude was already in the air before the ball was snapped.  Guess he knew the count, huh?  Amazing play…

The Bagger and I went our separate ways around 5:00.  (Thanks, dude… I owe you a fist full of beers the next time we get together!)  Since it was still early and I wasn’t yet ready to kill the rest of the night in my room, I figured I’d hit Market Square and look for something to eat.  My first choice was to go to the Oyster House for a big fish sandwich, but they were closed on Sundays.  That’s how I ended up at Primanti’s.

As I mentioned in my Podcamp teaser post, I had them hold the coleslaw.  I was relieved that the counter guy didn’t give me any grief over it.  I heard they don’t like it when you fiddle with their formula.  But, as my nephew would say, “Can’t like it!”

Slaw-less, however, I could and very much did like it! 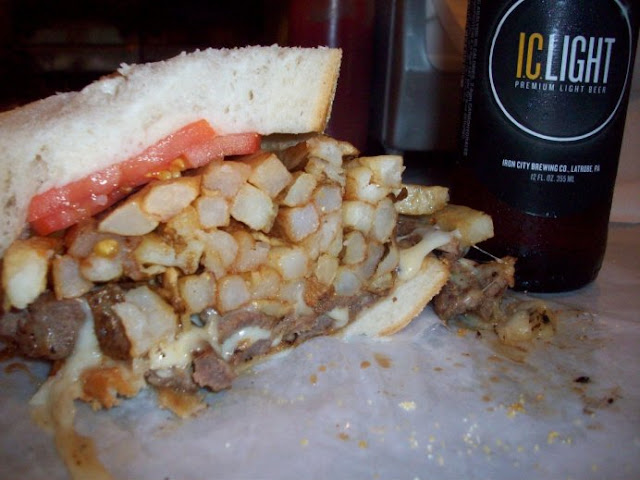 The Primanti’s angus beef and cheese sandwich, with fries.

I also liked the big Pittsburgh sports mural they had on the wall. 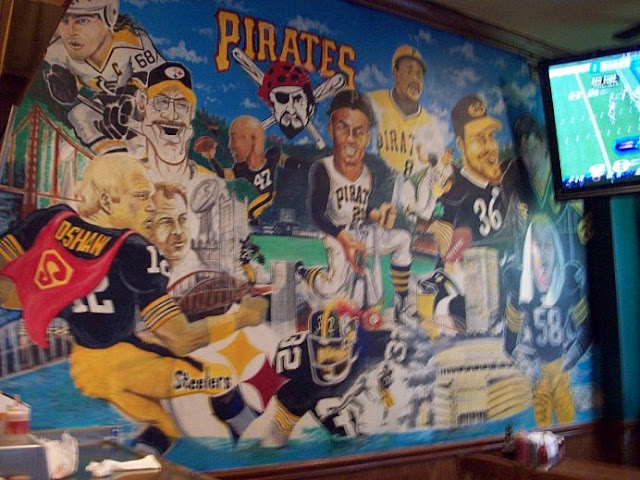 I had my sandwich, appreciated the wall, and followed the Jets/Patriots game on TV.  Boy, was it a tough walk out of there.  You know you’re full when you suck in your guy and nothing moves.  I was F.U.L.L.

I went back to my room and killed the rest of the night, as well as most of a bottle of Crown Royal, while watching the Sunday night game and then I turned in early.  I took off for home around 9:00 the next morning and made it home in great time.  I encountered much fewer of these on the way home: 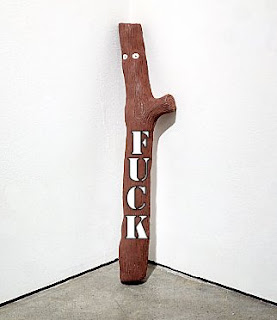 I had such a great time at Podcamp.  If you ever have a chance to attend one, be it in Pittsburgh or in your own home town, I highly recommend it.  It’s a real treat to be able to talk about blogging and writing with other people, without their eyes glazing over.  Unless they do it themselves, most people just don’t give a S about any of this, so it’s refreshing to be with like-minded people and talk about something that we all have in common.

I came out of there all charged up and ready to go blog the world!  And I don’t even know what that means!  But I’ve posted every day this week and that has to count for something.  (Don’t hold your breath, though, thinking I’m going to continue posting at that pace.  Pinky is about to mutiny.)

To all the people that put on this jamboree, I thank you for doing all the hard prep work and making all the technical thingees do what they’re supposed to do.  To all the session presenters, I thank you for putting yourself out there and helping the neophytes like me.  And to all the people that I met and hung out with all weekend, may I just say, “OK, OK, I’ll get on The Twitter!!!  Call off the dogs!”

And to the city of Pittsburgh, I say “Thank you for being so freakin’ beautiful.  I loved roaming around in you all weekend and enjoying your beautiful visage, amazing people and giant sandwiches.”

More pics from the weekend that I wasn’t able to squeeze in this week: 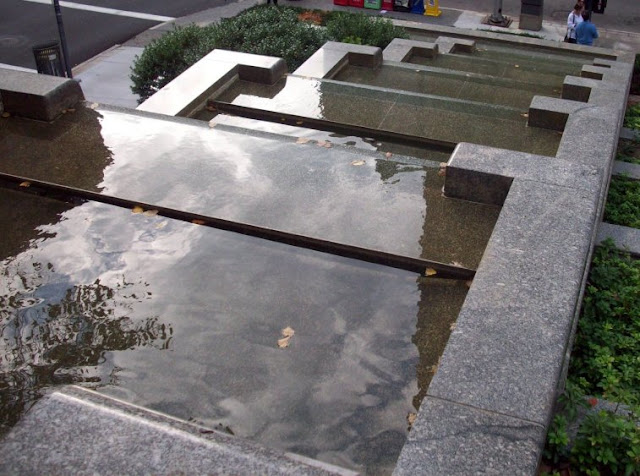 The Cascading Waterfall at Mellon Square, although at the time it was more like a watertrickle. 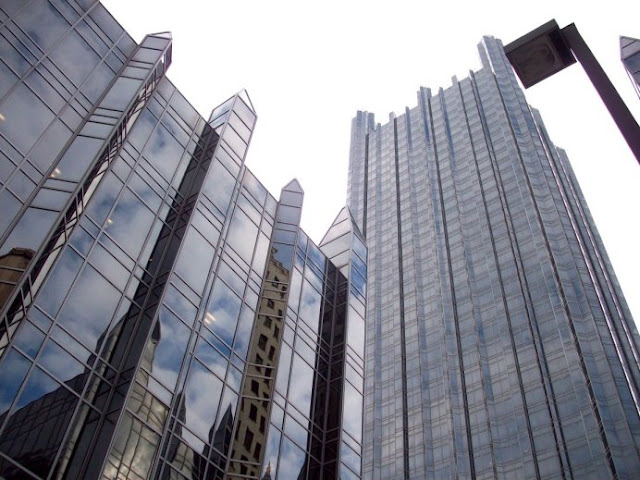 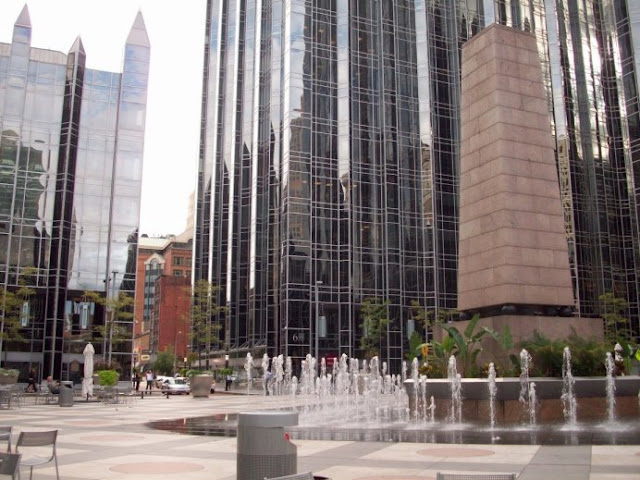 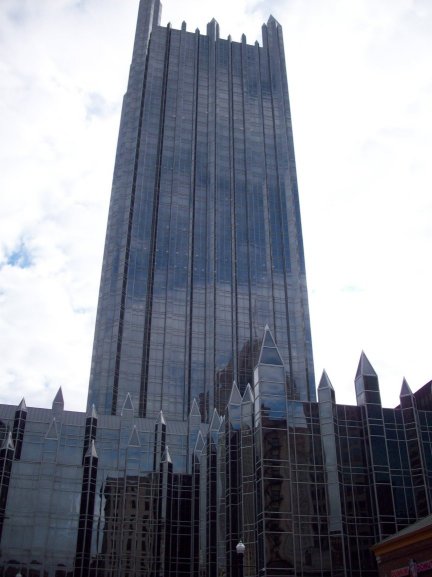 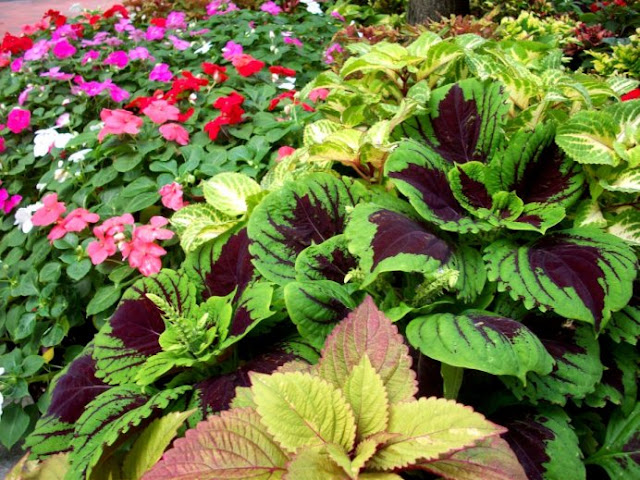 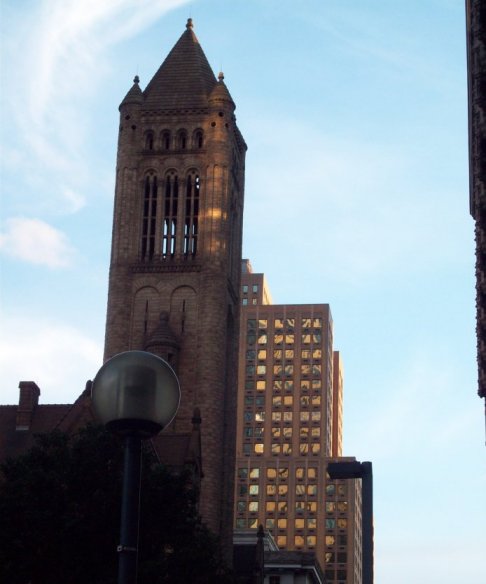 The courthouse at sunset, as I was waiting for the Carpetbaggers to pick me up. 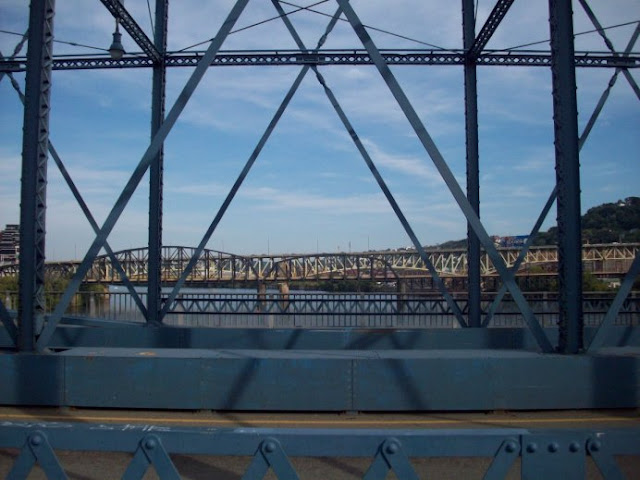 Shot through the Smithfield St. Bridge and across a couple more bridges spanning the Monongahela. 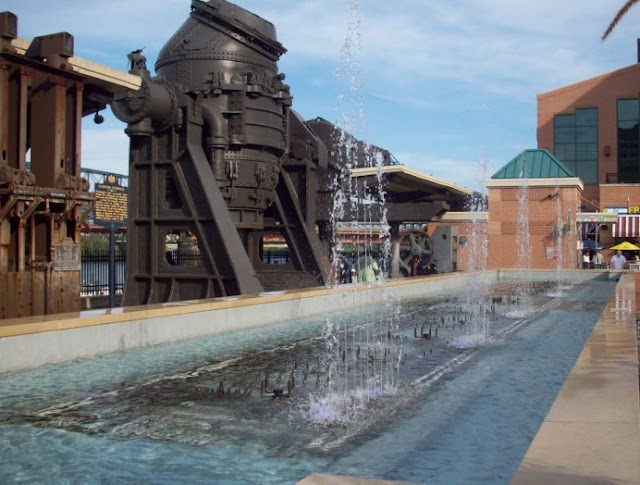 The fountain at Station Square… this time, during the day. 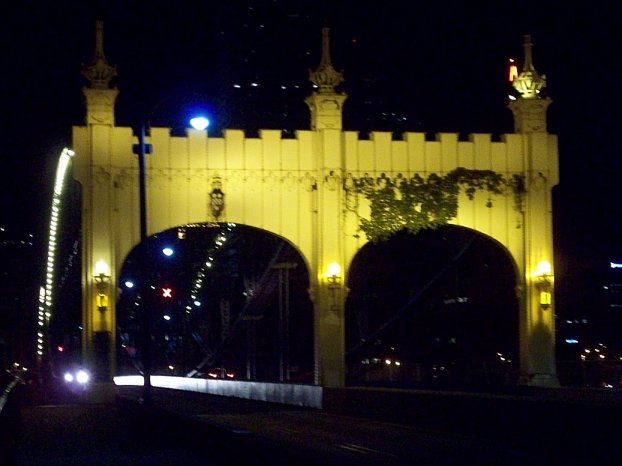 The entrance to the Smithfield St. Bridge, all lit up at night.  Just like me.
Posted by bluzdude at 7:21 PM

Email ThisBlogThis!Share to TwitterShare to FacebookShare to Pinterest
Labels: Bloggers, Bluz LIfe, Picture This, The Burgh, The Mojo Boogie