This weekend I’m traveling to Pittsburgh for Podcamp Pittsburgh 5 (or PCPGH5 for short).

This is a weekend seminar where a bunch of bloggers gets together, some of them get up in front of the rest and talk about stuff, then they all go get drunk.
This is totally up my alley.
I became aware of the Podcamps last fall when I saw a couple online videos of some of the speakers doing their thing and thought that it would be a blast to go to one.  Then after successfully meeting some wonderful Pittsburgh bloggers at my Darwinfish Fry in August, I figured I’d try to catch lightning in a bottle twice in one year.  Besides, when the Bitchburgh Bitches ask you to come to Podcamp and see their presentation, you best have your ass there.  Because they’re not really “asking.”
So I’m driving out tomorrow afternoon and going directly to the Omni William Penn, in downtown Pittsburgh.  (Hooray for “Thank You Points!”)  Normally I’d stay with relatives but in this case, the last thing I wanted to be doing was trying to drive back and forth from downtown, out to the suburbs.  I’m nervous about driving in Pittsburgh under the best of circumstances, let alone in after dark.  After drinking.  So I figured I’d stay within crawling distance.  I’m parking the car and letting it stay there.
I’m really looking forward to just being downtown.  Normally when I say I’m “going to Pittsburgh”, it really means I’m going to the suburbs.  We may come into town for a game, but then we head right back out afterwards.  Every once in a while we’ll stay downtown for a game but we don’t really get around the city much.  We check in, we eat, have drinks in the room, walk to the game, go back to the room, drink some more, sleep, then leave in the morning.
This time, I’ll have the opportunity to wander around a bit.
When I think about all this, I can’t believe this is really happening.  When I started writing this blog in early 2009, I just wanted a place to post some goofy shit and rant about whatever was pissing me off.  Entertain my friends and family a bit.  I never dreamed that “strangers” would actually come here to read what I had to say on a regular basis.  And I really never dreamed I’d be meeting up with so many of them in real life.
In November of 2009, I did a post about reaching 1000 hits.  Since between February and September I’d only amassed 260 of them, getting to 1000 in 2 months was astounding to me.  But not wanting to talk about numbers and stuff, I said that I wouldn’t bring up hit totals again until I hit 10,000.  Which was yesterday. 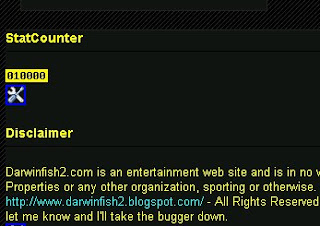 Of course 9,950 of them were misplaced searches for Hot Indian Aunties.
But I’m still astounded.  How the hell did that happen?  What happens if someone in authority finds out?  Every day I expect to log in and see a big red graphic that says,
“ACCESS DENIED, LOSER!”
across the screen and see the picture wink out like the Terminator’s vision at the end of Terminator 2 when he gets lowered into the molten steel.
But I digess…
So yesterday when I saw the hit counter reach 10,000, I checked my StatCounter site to see who it was that tripped the switch on that milestone.  To my delight, it was my pal the Carpetbagger, purveyor of Pittsburgh’s finest Carpetbaggery.  As a token of my gratitude, I’ve agreed to let the Bagger give me a ride from the Penn down to the Podcamp Welcoming Cocktail Party.
What, you think I have a prize budget?  I had to get my room on points!
Anyway, I’m glad I’ll have him for moral support because by that time, I’m sure to be a nervous wreck.  You see, my blogging idol Ginny aka PittGirl aka the Fairy Godmother of Pittsburgh Bloggers* is going to be there because her husband’s restaurant is providing the food.  As I’ve written many times before, she was my inspiration to start this site.  She was slated to come to the Darwinfish Fry, but last minute issues kept her from attending.
Her coming to my little soiree would have been perfect because there would have been a handful of other familiar bloggers there to act as a buffer.  Tomorrow night, she’ll be in a room crawling with other people that may be fighting for her attention.
It reminds me of back in the day when I’d have a backstage pass to meet some famous rock star or guitar hero.  I’d try to figure out what to say in the 30 seconds or so that I had the star’s attention, that would be meaningful without making me look like a fawning idiot.
I’ll see what I can come up with on the drive out.  I mean, I’ll have 4 hours of solitude.  Maybe I can practice into my MP3 recorder.  Or, hey!  Maybe I can work on the speech until I get it just right, then record it and play it back to her at the party!
Or not.
“ACCESS DENIED, LOSER!”
*OK, nobody calls here that except me, but I’m hoping it will catch on.
NOTE:  Of course I’ll post a full report upon my return on Monday.  If I can access a computer, I’ll try to get something posted over the weekend as well.  Wish me luck!
Posted by bluzdude at 8:03 PM

You should be the one to be jealous. Seriously.

I wish you were going to be there too, Cassandre. You add fun to any place you go. I bet the bridal shower will be a blast.

Good luck and have a great time! I love that your blog has become big - it's (you are) definitely deserving of the attention. Yay for persistence in good writing!

Happy PODCAMP. Be safe, have fun (Howzat gonna happen) and be sure to roam around dahntahn, especially Smithfield Street where your Grandpa greeted all his followers at lunchtime everyday as the " Mayor of Smithfield Street".
Also check out Market Square, off Liberty Ave., with the Oyster House where you will see the Ed DiNucci Memorial Grease Spot. Be prepared to eat standing up because there are no chairs.
We all look forward to reading of your adventures.

Good luck and have a fantabulous time. It sounds like great fun!

Cristy,
I don't know about "big"... That's Church, Burgh Baby and Hyperbole and a Half are "big"... but this is an awful lot of fun!

Mary Ann,
The Pittsburgh Art Institute, where the Podcamp is being held is right near Smithfield St. I'll have to mosey down and pay my respects.

Good luck! Have fun! Can't wait to hear about it!

You know, DG, it's not too late to sign up and attend yourself... go gather some information to use to start your OWN blog!

PGH history LIVES on Smithfield St. Check out, too, the old gray stone church with the red door. If you have time, mosey around the headstones in the yard.
Despite yuppification of places like the Strip and, unfortunately, the Point, Grant St., where you're chill'in, still has the olde courthouse that speaks of eras past. Some things don't fit into a tidy theme park.
For an elegant Italian dinner, try Lidia's, 1400 Smallman St., close to town and fantastic food, like calamari that is NOT fried.
Or find an Isaly's for a chipped ham sammich wit pickles an 'nat. Mom 'n em say Bon Voyage.

I registered for PodCamp, but I spend my days so completely overwhelmed by day-to-day shit (work, 2 kids, an exhausting pregnancy, a husband, and a house to run, and the logistics of making all that stuff work together) that I totally got even more overwhelmed and bailed. With big hopes for next year.

So you come back next year!

And have fun. Everyone is so cool, and believe you me, no one is checking credentials. I know because I went last year, on the Sunday, and they let me stay! They even fed me, and let me ask questions. When it should have been clear that I had no clue as to what I was doing.

I'd like to thank all the people who made this day possible. My parents, of course. My wife. (I love you, baby!) My agent, for all his hard work. And Bluz, for believing in me when no one else did. And for all you kids out there, dreams do come true.

Picking you up at 7, Bluz. I'll be the one in the silver Pontiac Vibe. Jealous? Thought so. I'm so excited. I just pee'd a little bit.

While you guys are downtown be sure to stop in at the Oyster House in Market Square for a fish sandwich and a beer.

Their fish sandwiches are HUGE and not expensive. The atmosphere is real Pittsburgh too.

WAAAAA!! I want to party with the Pittsburgh bunch!!!

I'm back from Podcamp and had a most excellent adventure. I'll probably get a picture or two up tonight and do a full post tomorrow. It'll probably take a couple of posts just to get it all in.

Mary Ann,
I had several walks up and down Smithfield Street, including a stroll over the bridge.

RPM,
I saw your message to Uncle Crappy, who I was excited to meet. Wish you could have been there too. We'll cross paths sooner or later...

Bagger,
You and the Mrs. are The Goods! Thank you both for looking after me!.

Dog,
I tried to go to the Oyster House on Sunday, but they were closed. So I had to "settle" for Primanti's. Pictures to follow.

Judie,
Next year! Southwest Airlines! Do it!

I can't wait to read all about it!

I would be no help in the suggestion area. I've met Jerry Seinfeld and all I could say was, "Hi, nice to meet you." Very forgettable as you see.