At long last, today is the “real” opening day of pro football.  Yes, I know they played the first game on Thursday, but to me, opening day is when you can sit at home, watch your game, keep up on the rest of the day’s games and root home your picks.  And drink beer in the afternoon.
Last year, I would do a rundown of each Steelers game… just my impressions and such.  For actual game coverage, there are too many other sites that do it better and more in depth.  And for funny game coverage, nothing beats Ginny’s “What They’re Really Thinking”, where she covers the action via word bubbles in the game’s action photos.
Last year, though, the only people reading me were overwhelmingly from Pittsburgh.  This year, not so much.  Therefore I don’t feel like I should devote that same level of Steelers coverage.  There are too many that just don’t give a rip.  I know it sounds like I’m complaining, but on the contrary, it fills me with a great deal of pride.
Believe me, I’m still going to talk about my Steelers and football, I’m just not recapping the game every week.  What I WILL be doing is continuing the fascinating online pursuit of Game Day Mojo.  If one doesn’t like Pittsburgh sports, there’s always fashion!
As you may remember from last year, I use a spreadsheet to track a number of categories regarding game logistics and what I wear.  Regarding the games, I track home vs. away, what jersey the team wore, and day/time of the game.  For me, I track what I wore during the week, on the preceding Friday, on game day, and where I watch the game.
This week, we had Jersey Day at work, so I had to pick one to wear.  I went with my new #56 Lamarr Woodley black jersey.  Ultimately, I wish I hadn’t because after running through my options, it was the logical pick to wear today.
Usually I start the season with my Willie Parker replica jersey.  But with Fast Wille no longer on the team, that option is not appealing.  Since the Steelers are at home, that eliminates my white jerseys.  I’d rather not start with the Throwback jerseys yet, so they’re gone.  I have an old-school Jack Lambert black jersey, but I try to use the classics very sparingly.  Lastly, I have a black Troy Polamalu, but that’s my crown jewel that I usually save for the late-season and playoff games.
All that leaves me with having to double up on the Woodley. 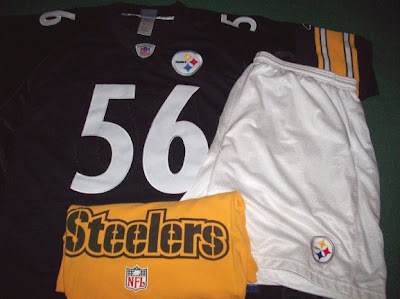 Well, here goes nothing.  I am ready for some football.

Steelers are now 1 - 0 when I clean house with multiple TV's blaring the game.

I hope Dixon got all those stupid passes out of his system. We might have been able to survive the mistakes against the Falcons, but the Ravens will make us pay for those give aways and throws into the ground.

What a great game, and I don't even like football. Our floor was so loud with the hooting and hollering for the game. We didn't know if people were dying or the Steelers were winning!

Cassie,
I'm going to pretend I didn't see that. The Ratbirds defile everything they encounter.

Stressful game, but a great resolution. Defense looks to be in good form, same with running game. Dixon better tighten up though. Great last play!

Jeez, you guys! I don't know what to say! I only watch LSU and the Saints! Please don't hate me for that!

I have no problems with either one... my teams rarely play them... although my Steelers will be visiting New Orleans this year. But still, I was completely pulling for the Saints in the last Super Bowl.

The kid and I both wore our Hines Ward jerseys today, so they are 1-0 as well. Of course, I remember when I wore my lucky Steelers underwear back in '01 and Kris Brown missed something like 15 field goals in a game against the Birdies.

I am a stat girl, so I think it is so cool that you keep track of these (odd) things.

Facie,
I remember that game... I was dying a thousand deaths that day.

I trust you didn't wear those undies on game day any more... I mean, after a game like that, how lucky could they possibly be?

Funny, I have a pair of Steelers boxers and every time I ever wore them (like twice), we lost. I figure, once could be a fluke... twice is a trend. But missing 5 field goals... that's just bad mojo.

I am not excited about football season. At all. Why? My boyfriend retreats into his man cave and I literally do not see him until February. This would be all well and good if I didn't have ninety million other things I wanted to do and have to make my single friends come with me because my default partner is holed up watching a game between two teams he doesn't even like.

My Mojo included my #43 White and the NYT for time outs and commercials. Troy P. was incandescent, as always, and Hines incredible with his audible block. I can still see his face.
"I seem to amaze myself," he told Ron Cook of the Post Gazette. Apt words from the Buddha of the NFL.

I'm doing game comments over on Steel City Slant this year. They're very football-centric. Not a lot of fluff, but not overly detailed analysis either. So if you're looking for a little something extra to keep an eye on Stiller-wise, check it out. However, you may not be entertained by the posts. I'm going for enlightened rather than entertained.

@Cassie - Gargle with Clorox, rinse with gasoline, and repeat. That should cure you from "Go Ravens" for a few months. Just trying to help with your disease.

Trixie,
I try hard not to be that kind of fan, although Pinky may beg to differ. I will always watch my Steelers. And I at least check in when the Ratbirds are playing because A) I hate them and B) they’re our direct competition. But unless there’s nothing else on, I don’t usually watch the other games, at least until they start having playoff implications later in the season. Oh yeah, then there’s college football. Again, I just watch my one team, and sometimes a marquee matchup.

Then once hockey season starts, well, I start to feel kinda bad for Pinky, because even though I only watch one team, they play 2-3 times a week. I always tell her… use this time to do what YOU want to do… read, write, paint, call your friends, go out… whatever. Or go clothes shopping… Lord knows you don’t want me there for THAT.

Men and sports… you just have to accept that they go together.

OK, maybe I’m closer to “that kind of fan” than I thought. But it could be worse. I rarely watch baseball. I never watch basketball, golf or NASCAR. It could be much worse…

Mary Ann,
Hines plays with a joy that is rare in professional football. Every week it’s like, “Oh boy, I get to go out and do this AGAIN??”

Dog,
I’ll come by and play.

Money's money. And jebus, I will never pick them again. By law, I can't.

And Michael Orr plays for them. He's a good guy.

Plus, any team that comes out of NY sucks. Rangers, Yankees, Mets, Jets, Giants, Islanders...ASS HOLES. I'm rooting for the lesser of two evils.

Hey, kinda reminds me of when I voted for Kerry over Bush.

Also - keep in mind kids, I'm from Minnesota. I pay no allegiance to any NFL team. I live and die for the NHL. Vikings are an afterthought and the North Stars are still playing for us. Just in the wrong state. With the wrong name.

I picked the Ravens too, but I can't say I'm rooting for them. It's like an insurance policy. If they win, I win (in my picks)
If they lose, I win (because I hate them).

Jets are working hard to hand this game to the Ratties.

Tom is never watching football again (he always says that). Jerry needs to get rid of that wimp-ass coach. Geesh! As Tom said after the game, Jimmy Johnson would've fired that player on the plane ride home. *sigh*

Please, football season began with the Saints of course. :)

I have to say, I'm impressed with the thoughtfulness of your man fashion.

Cristy,
Which player are you talking about? The one that horse-collared that defensive end on the last play, drawing that killer holding penalty?

That really kind of ticked me off, but not for the reason you may think. Steelers linebacker James Harrison gets held like that every time he speed-rushes to the outside, and never gets the call.

I went through this for every game last year, complete with pictures. (Click on “The Mojo Boogie” from my label cloud.) But I’ve been tracking my game gear with a spreadsheet every year since 2005. It’s been very helpful in identifying mojo trends. And it’s also a bit weird, I admit that. But that’s the way I roll.