Before Christmas break, I borrowed seasons 1 & 2 of the Showtime series “Dexter.”  I don’t get Showtime, and Sitcom Kelly and another friend of hers thought I would like it.
Dexter is a show about a serial killer that works as a blood spatter expert, to catch other killers.  He only kills bad people… those that have gotten away with killings of their own.  The show is kind of like CSI, only with a darker twist.
I’m not going into a full-scale review, but I am going to mention some things about the show.  Also, don’t feel you have to be familiar with the show to continue reading.  The show itself is not really the point.  But if you are currently watching, or plan to watch “Dexter,” I recommend skipping ahead.  Look for the next red text. 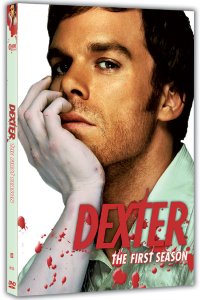 See, that’s called a “Spoiler Warning.”  I don’t want to ruin any future viewing for you.  Because Lord knows, I haven’t been able to get out of my own way on this one.  I’ve already ruined several plot points for myself and for someone else.
Before I sat down to watch the first disc, I looked at the episode description blurbs inside the DVD case.  They were sufficiently illuminating about the direction of the show, but didn’t really give away anything.  All I got was that the season was predominantly about catching the “Ice Truck Killer.”
Where I got into trouble was when I decided to peek inside the case for Season 2, where the first line I read was, “Now that Dexter killed his brother Brian, the Ice Truck Killer…”
Gahh!  Big twist ruined before I even start; so much for the mystery killer.  But still, the show was highly entertaining and far more engaging than one might think, given the subject matter.  So I felt like it would be a good idea to make note of my thoughts and share them with Sitcom Kelly and her friend, to whom the DVDs belong.  Given how Dexter uses a lot of voice-over to explain what he’s thinking, I immediately thought that it would be fun to add a “Dexter” spoof to our sitcom.  And we can have Sitcom Kelly called upon to perform as a “wine-spatter” expert, hired to reconstruct party spills on expensive furniture.  Lots of room to play there…
Meanwhile, I was at Target this week and noticed Season 4 for sale.  Right on the cover, it showed Dexter with a baby.  Gahhh!  So now I know that he gets in deeper with whom I suspect is his current girlfriend on the show.
Later, I was on imdb.com, looking up the hot actresses in the cast to see if I’ve seen them in anything else.  And there it was… Dexter’s girlfriend listed with her last name/Dexter’s last name.  Gahhhh!  So now I know that Dexter marries her.
So what do I do?  I bat the email back to Sitcom Kelly and her friend, telling them the details on how I just spoilered myself again.  Her friend wrote back, “Shut up!  Don’t tell me any more!”
Gahhhhh!  She hadn’t seen any further seasons and I just spoilered her!  Now how would I know that?  I figured since she was buying the DVDs, she must really have liked them, and at least, have already seen them!  God dammit!  Now I’m dragging innocent people into my web of spoilerism.
I tell you, the show has been on since 2006 and I didn’t know diddly-squat about it.  Now, all of a sudden, I can’t turn around without being getting plot points in the face.  WTF??
Then this morning, I was delighting in the return of That’s Church, from hiatus.  Wouldn’t you know, right there in the first post I read:
"Got addicted to Dexter, the Showtime series, thanks to my husband. I thought he was going to cry when Burgher Julie Benz died."
Gahhhhhh!  Julie Benz played Dexter’s girlfriend.  Shit!  Shit!  Shit!  Shit!  (And she was hot, too.  Shit!)
I was all revved up to complain in Comments… not mean-like… you know I love Ginny… Hell, I stalked her at Podcamp, for cryin’ out loud.  But I thought better of it after her next lines:
"If you’re going to comment that I just spoilered an episode that aired two years ago starring an actress that is no longer on the show because she has a new show, then let me also inform you that Darth Vader is Luke’s father, he sees Bruce Willis because Bruce is dead, and Jerry had her at hello. HE HAD HER AT HELLO."
OK, point taken.  But damn it, why is it NOW that all this shit is just coming out of the woodwork on me, for a show I never gave two shits about for the last 4 years?
If this is how 2011 is going to unfold, I’m in for a bumpy ride.
**********OK, no more Dexter spoilers - Total subject change ahead********** 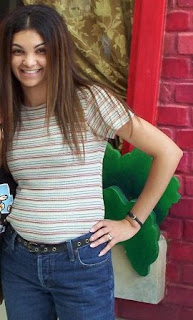 You may remember that back in October, I did a post on my friend Pam; my former “work wife.”  I wasn’t even going to tell her, but some of you were curious to see her reaction.  So about a week after I posted, I sent her the link.  I anticipated a major fuss from her end.
What I got was… absolutely nothing.
I haven’t heard a peep from her since.  I suspected it was due to computer issues with her, but I wasn’t sure.  Could she have been pissed at me for talking about her online?  Or did she not like the pictures of her I used?  I wondered.
Then last Friday, I sensed a disturbance in The Force, emanating from out her way.  Pam finally found my email, read the post, and responded with a comment.  But since she was commenting on a 3-month old post, I knew the comment would be seen by approximately no one.  So as a public service, I thought I’d run it here.  Sunshine, the floor is yours.
"Bluz...Bluz...Bluz...OMG!!!!! I can't believe you wrote a blog about me. OK I am boo-hooing right now... let me get it together.
I guess you are wondering what took me so long to read/respond to your wonderful post. In the past I used the MSN browser for email (loved it) and for some reason it stopped working so I have to use HOTMESS (oops Hotmail). Can't stand it! Any hoo... Bluz, as you know my sun has not been shinning lately, I haven't been checking email on a daily and now have accumulated thousands of emails in my INBOX...well no more. Operation Clean Out My Inbox has begun. At first, I was just going to hit DELETE button and delete all of the emails at one time but I thought (yep, I do that sometimes) “Pam, delete the emails in sections.” I am soooo glad that I listened to myself! You were email #918."
So that explains the extended “radio silence.”  OK, onward…
"At work Bluz and I were two peas in a pod. Really, you should have seen our cubicle. Beware, don't talk to Bluz before he has his morning bottle of Diet Coke, and don't let something happen on the subway or the walk from the subway to work...BAD MOOD!!! At least when he arrived, there I was with a smile on my face to brighten his day. The real reason why I was smiling is because I was thinking about my bacon and pancake breakfast. LOL!!!! I miss those days.
What I miss the most is eating lunch together, exploring our taste buds at all of Baltimore Inner Harbor restaurants. I must admit everything that Bluz wrote is TRUE. He is my best friend and a person who I know will be honest with me whether I like it or not. It doesn't matter whether it's been 2 days, 2 weeks or 2 months we pick up right were we left off. You will always be my special friend.

P.S. Bluz, I never thought people were talking about us, were they? Was I that clueless?

P.S again... writing this made my day!"
Thank you for writing back, Pamela, and thank you for being “you.”  If you enjoyed reading it half as much as I enjoyed writing it… well then I enjoyed it twice as much as you did.
PS. My boys are going to the playoffs.  What happened to your (Cow)boys?? Gahhhhhhh!
Posted by bluzdude at 7:59 PM