Yesterday the prosecution finished their case and rested, the defense was presented and rested and we adjourned.  This morning, we got jury instructions and closing arguments, then Alt Juror #2 and I were dismissed.  (Yes, one Alternate got called up from the minors.)

I didn’t even get to keep my notes.  (Of which, there were a LOT and they were good.  I’m just glad I didn’t put in any extraneous observations or opinions in there, like “Gee, the prosecutor is cute!”)

Is a female prosecutor called a Prosecutrix?  (If not, she should be.)  I’ll have to ask V_Uncorked or the Faux Trixie.

Here’s what I’m going to do: today’s post will be about all the final mechanics of my experience with going through the trial system.  In my next post, I’ll talk about the case itself.  If I can’t do any deciding on it, I can at least play to YOU.  I’d hate for all that note-taking and attention-paying to go to waste.  And by the time I post next, I should know the outcome.  (I have a mole!  I traded email addresses with one of the jurors and he agreed to email me with the outcome.)  I will tell you this much right now: it was a child-abuse/assault case involving an 18-day old baby… very serious stuff.

Yesterday’s events went relatively smoothly.  All jurors were accounted for and we spent most of the day hearing testimony from the various players: the EMT, an expert medical witness, the lead detective and the various participants.  The prosecution played the tape of the detectives interview with the defendant.

I’ll say one thing… the written transcript of the interview left much to be desired.  It was like reading the closed-captioning of a live TV show.  Apparently, the transcriber only took one pass at it.  I can’t necessarily blame her though; I suspect that Baltimore City can’t exactly afford a whole squad of transcribers.  They probably just rip through as best they can, then move on to the next one.  But still, if the only thing I had to go on was the transcript, a lot of stuff wouldn’t have made any sense at all.  It was all I could do not to stand and “object,” then request the court provide me with a red pen.

The defense only called two witnesses, the defendant’s daughter, who had testified earlier, and then the defendant herself.  The whole defense didn’t last any longer than an hour.

After we wrapped yesterday, I went over to the formerly crooked portrait to find out whom it was.  Turned out it was a portrait of Daniel Webster.  (Not the dictionary guy, the statesman guy.)  I looked through Google Images to try to find the same portrait, but I was unable to find the exact one.  This one is close though: 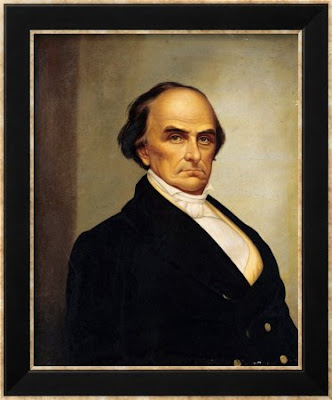 In the courtroom portrait, he looks even more severe.

And I swear the whole time I was sitting on the far end of the jury box, he was looking right at me.  It was like he was thinking, “Hey Bluz… ‘You’re Alternate 3??’  That’s the best you could do?  Putz!  Wait’ll I tell Franklin.  A penny saved is all you earned today, buster.”

Anyway, when we reassembled this morning for jury instructions and closings, we were down one juror.  Word around the table was that Juror #1’s kid was getting sick.  So Alternate #1 got put in the game.  Dude did not look happy about it, but what can you do?

Hell, I wasn’t happy about it either.  If only you could trade numbers, like they were draft picks.

We were delayed in getting started today because both bathrooms in the jury room were out of order.  Apparently it was the result of a larger plumbing problem at work, and not the result of a “logjam” on the part of a jury member.  The men’s room out in the hallway didn’t have water either.

It was funny because of all the days for “the hopper” to be out of order, it had to be the one when everyone was going to be cooped up there all day.  Not that it was going to affect me… I was going to get out of there.  Plus, I’ve been cutting way back on my intake of fluids, for the express purpose of making sure I didn’t have to pee at an inopportune time.  I’m sure squirmy jurors can make the attorneys lose focus.  Plus the chairs squeaked like crazy.

Eventually they moved us to another courtroom.  It was much nicer than our current one, I might add.  Too bad I didn’t get to enjoy it for very long.  The judge gave us our instructions on how to interpret the law and what it took for the defendant to be guilty of the charges.  The attorneys did their closing arguments in about 45 minutes.

This was really the most interesting part, because they could tie their narrative together with the evidence presented (or lack thereof).

I’ve always felt that I was pretty good at picking up the relevant portions of an argument.  And like politics, there is a whole lot of shit thrown up in the air during a trial.  The important thing is to pick out what matters and what is essentially unimportant or a red herring.  (I’ll talk about some of that stuff in the next post.)

It was entertaining, however to watch each attorney build their case.  The biggest difference between the court dramas you see on TV and the real thing is the slow, deliberateness of the questioning.  Each bit is put into place stone by stone, brick by brick.  You don’t see that on TV, probably because it can be mind-numbingly boring.  But it has to be done in order to build a solid case that leaves no holes to be exploited by the defense.  The prosecutrix went inch by inch.  Pieces of evidence were built up like this: (and I’m paraphrasing…)

(After spending much time establishing, say, medical expertise of the supervising doctor…)
Prosecutrix: What is this?

Dr: (Long explanation of how a CT scan works and what it is intended to show.)

P: Whose CT Scan is this?

Dr: It belongs to the victim.

P: How can you tell?

Dr: Her name is embossed on the slide, per standard procedure.  (There is more testimony on how it is stored, how it is reproduced, etc.)

P: I offer this CT Scan into evidence.

Apparently part of being a defense attorney is objecting to every piece of evidence offered by the prosecution, forever and ever.  The attorneys would approach the bench, they’d discuss things out of earshot of the jury and then the judge would overrule or sustain.  If he over-ruled the objection, the piece would be accepted as evidence.  If not, the prosecutor would usually ask a few more seemingly mundane questions and then re-request entry as evidence.  It was almost always granted.

This tap dance went on for every piece of evidence: X-rays, CT scans, MRIs, physical evidence from the scene, the recorded interview, etc.  So you can see why they don’t put that stuff on TV.  Fifteen minutes of that and you’re comatose before they even discuss what’s on the freakin’ X-ray.

Now the defense, his job is primarily to object to everything the prosecution does or alternately throw out as many other plausible explanations for the evidence as he can that does NOT include his client doing anything illegal.  Again, like with politics, there are things that matter and things that are designed to grab your attention away from one direction and point it in another.  Whether the distraction is relevant to the case or not is up to the jury.

I just want to mention that the defense attorney for this trial looked like he was right out of central casting, due to his resemblance to this actor: 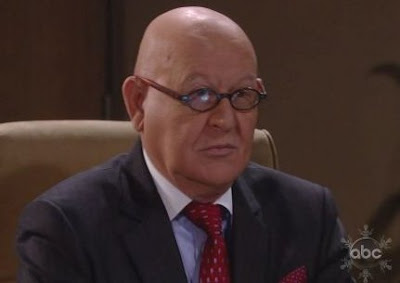 I couldn’t find this actor’s name, but he’s played a high-priced attorney in just about every show I’ve seen him on.  He had his own lawyer series, a number of years back.  Can’t remember the name of that either.

But it’s not like the prosecution doesn’t throw some stuff up in the air too.  Our prosecutor routinely referred to the victim as “Little.”  As in, if the child’s first and last name was “Baby Girl,” she frequently called her “Little Baby Girl.”  It got so that in my notes, I’d refer to her as “LBG.”  Obviously, she was using loaded language as a subtle way of reminding the jury that the victim here was a helpless, fragile little baby.  I’m not saying that’s wrong, but that I see if for what it is: an appeal to the emotions.

So after the closing statements, we were directed to the jury room to deliberate.  The court, as per Maryland state law, confiscated all cell phones.  Except mine, of course, because I was heading out the door.

But before we broke for the jury room, the judge appointed a jury foreman, Juror #10.  This was something I’d been wondering about the whole time… how is a foreman picked?  Was it by juror number, like it’s always #1?  Does the jury pick it’s own?  Can someone decline to be foreman?

Well, now I have my answer.  The judge selects a person of his choice from the panel.  There didn’t seem to be any room for debate or refusal with his selection.  And it was funny because earlier, while we were waiting to go in, I was looking around and wondering, if I needed to choose, which juror would I pick for foreman (given that I wanted no part of it).  Turns out, the judge picked the same one I would have.  I had to smile.

Now that I know this, the next time I end up on a jury, I’m going to do some research first, into how a good jury foreman should handle running the deliberations.  You know me… Preparation Guy.  Because frankly, the only thing I know about foreman is this: 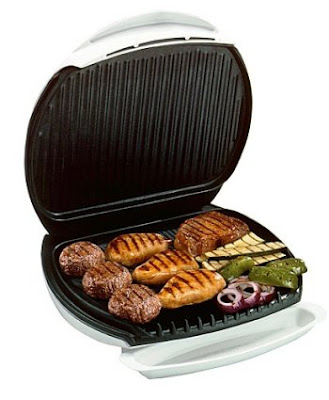 Which is still better than this: 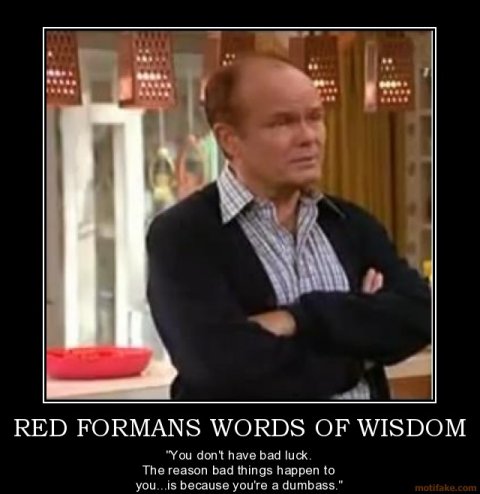 Completely Unrelated Note: This afternoon, my dear cousin Angela, the one with her first baby due within a day of Cassie’s, gave birth to little Eddie Jim this afternoon.  Boy is 9 lb. 9 oz, 22” long.  I don’t have any details yet, but am told the mother is fine and in recovery.  This is the first grandchild born to her parents and I’m just thrilled for the whole family.  This child will never want for being loved.
Posted by bluzdude at 4:54 PM