A Chance to Get it Right

In the last couple weeks, Maryland’s state government began working on legislation to legalize gay marriage.  Last week, it passed in the State Senate and has now moved to the House of Delegates.

As a long-standing advocate for gay marriage and all manner of equality, I should be thrilled.  I spelled out my take on this issue with a post from November of 2009, when the state of Maine repealed its gay marriage law, via referendum.

It is a good sign that Maryland’s bill is at least making progress.  They had a sober and respectful debate in the State Senate and it narrowly passed.  The reason why I’m keeping my hopes low is that conservative forces were not prepared for the speed with which the bill went through the Senate so there was not a lot of legislative pressure brought to bear.  The House of Delegates is shaping up to be another story.  This debate is going to get messy.

Religious conservatives are already popping up in the newspaper and online, spreading the usual fear mongering, half-truths, irrational assertions and Bible, Bible, Bible.

They’re doing so because they know that even if the bill passes the Assembly, 55,376 signatures can still put the law to a referendum vote in 2012 and get it overturned just like they did in Maine.  So the right wing noise machine is honing in on the unwashed masses.

Maryland may be a “deep blue” state, but that won’t help on this issue.  A great deal of the “blueness” comes from the African-American community, where there is still great resistance to gay marriage, based on the Southern Baptist influence.  If the issue indeed comes out on the 2012 ballot, it will also be a presidential election, which will be sure to bring out the vote.

Last week there was some schmo in a “Letter to the Editor” of the Baltimore Sun claiming the “time is not right” and “there are more important priorities right now.”

The thing is, when is there NOT some kind of crisis going on?  I’ll tell you… “Never.”  There’s always something that someone can point to and claim that it’s more important.  That’s no reason to continue oppressing an entire class of people.  I say, let’s clear up this little matter that has zero direct effect on 90% of the population, so that we CAN turn to other matters.  For that 10%, it’s a huge issue.  Fixing it takes no skin off the backs of the other 90%.

Today, there was another letter that has this to say: “If you ask the smallest child about marriage, they will answer marriage is between a man and a woman.  All logic, not to mention the Bible, proves this.”

There is so much wrong with that statement.  First of all, if you ask the smallest child why they want the light on at night, they’ll tell you it’s to keep away the monsters in the closet.  (Or the alligators under the bed.)  What children say does not make for a good source of public law. It’s not even remotely relevant.  When people start bringing “the children” into an argument, it’s a sure sign that they can’t win on merit.

Secondly, “the Bible proves this”???  I’m sorry; the Bible doesn’t prove jack shit.  The Bible contains no proof, no evidence, and no hard data on practically anything, let alone on this issue.  That’s why the whole thing is called “faith.”  And it takes a great deal of that faith to put more stock in a book of 2000 year old stories than in centuries of physical and biological evidence.

It also contains a great deal of material that we disregard out of hand, from, say, how to treat your slaves to why eating shrimp is a sin.  I’m sick to fucking death of people cherry-picking the Bible in order to uphold their biases.  Sure, one part is and sacrosanct and never to be violated and other parts are expendable because, hell, we like shrimp.

The letter writer goes on to try to disassociate the link between the civil rights movement of the 60s with gay rights because blacks were deprived of far more rights then than gays are now.

What it fails to acknowledge is that even though the finishing details are different, the nut of the problem is the same: depriving select rights from some people for no other reason than the way they were born.  It’s wrong in big doses and it’s wrong in small doses.  Period. 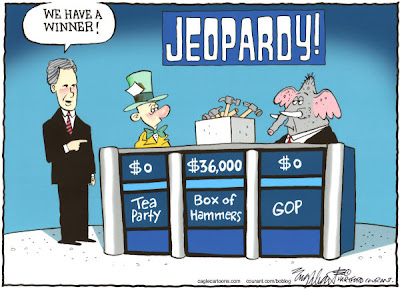 Another weak argument brought to bear is the whole slippery slope case, like from this Letter to the Editor: “And let the politicians who support it be honest and profess their support of incest and bigamy as the measure will lead to incest and bigamy to be recognized as forms of marriage as well. Why not rename the law as the Gay, Incest and Bigamy Marriage Act and see how many people support it?”

Yes, the inevitable boogeymen, incest and bigamy, mentioned three times in two sentences.  This letter doesn’t mention bestiality, but that often comes up as well.  These issues get roped into the gay marriage for one reason: to equate gay marriage with something detestable.  None have anything specifically to do with homosexuality, nor is there any sort of movement to make them conventional.  This entire argument, if you can call it that, is designed to scare people.  That’s it.

The unfortunate thing is how often it works.

In a page one story in The Sun today, Del. Don Dwyer seems to be spearheading the scare tactics.

“Dwyer is gearing up for a shock-and-awe House debate – he says he has been sharing with colleagues a pamphlet that includes explicit descriptions of sex acts.  Such pamphlets, he says, have been passed out to children in Massachusetts where same-sex marriage is legal.”

Right… pamphlets of sex acts being handed to school children.  What planet is he talking about?  I know Massachusetts is a blue state, but come on.  What possible rationale would there be for such activities?  I’m telling you, if that happened at all, and I highly doubt it, it’s the conservative nutjobs that did it, to highlight the “ick factor” of the entire subject matter.  It sounds like one of their ACORN or Planned Parenthood “stings.”

My dream is that one day, cooler heads will prevail and we might possibly have a rational discussion about matters that divide us.  Ultimately, I’ll sleep much easier once people stop looking for things to get offended about and just mind their own goddamned business. 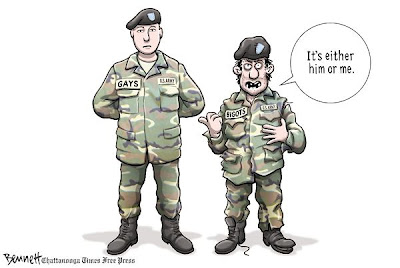 Yo, if you’re worried about the institution of marriage, work on your own.  Leave your neighbors out of it.  And perhaps, one day, once your precious children come into contact with other kids that have two mommies or two daddies, they’re see that all the commotion was for nothing.  Instead of learning all they know about homosexuality from film clips of Pride parades featuring streams of flamboyant bare-chested Freddy Mercury clones, they’ll take their cues from real people living their lives the best they can.

Then maybe when they grow up, we’ll have a lot fewer judgmental pricks running around polluting society with their own intolerance and prejudice. 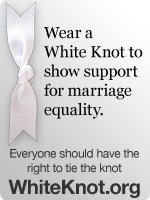