Right now.  I want the Super Bowl game to be on Right Now.  I can’t think about anything else, I don’t want to do anything else… I need it to be Game Time.  However since I am not in possession of a time traveling Delorean, I’ll have to make do by scratching out a quick multi-subject post.  Can’t concentrate on anything for more than a few minutes at a time, anyhow.
I considered doing my taxes today, but “taxes” sounds too much like “Texas,” where the Super Bowl is being played, so I’m sure I’d lose concentration.  I’d probably end up accidentally putting an extra zero onto my claimed income, or something.  So I’ll put it off until next weekend.  I can wait a week to receive that chump change that I expect to get back.  Sometimes, it sucks not having any deductions.  But then I read some other “family” blogs and I get over it immediately.
In a way, I almost want to apologize for focusing so much on football this past month.  I’ve never blogged during a Steelers playoff run so it’s kind of new territory for me.  But I tell you, the hits I’m getting are off the charts.  (For MY piss-ant little blog, anyway.)  But I can’t get too high on that… most of the hits are from Picture Raiders looking for Steelers stuff.  Not that there’s anything wrong with that… I mean, I’m one of them.  I don’t give me credit for getting hits on a picture that I, myself, went out and obtained from somewhere else.
The post I did on the late Steelers radio announcer, Myron Cope, has been especially popular and the embedded YouTube clip of his sound bytes has been getting a workout.  Yoi!
Still, it’s nice to see that StatCounter bar graphs reach new levels.  But I promise, once the Super Bowl season is done, I’ll move on to other areas of interest.
Like the Pittsburgh Penguins!  (Just kidding.)
The Workplace Rebellion
My little Rag-tag Band of Steeler Rebels had a Pre-Super Bowl luncheon yesterday, in our boardroom.  I tell you, Mojo is infectious.  We had (very close to) the same people, ordered the same pizzas, had the same decorations and sat in the same places, as we did for the last one we had prior to the AFC Championship Game.  No sense in taking a chance, I say.
Again, some of the Ratbird fan executives found it necessary to come in and try to talk smack to us.  Obviously, that is bound to be unsuccessful when the smack-talker’s team was beaten 3 weeks earlier, by the team being celebrated in said boardroom.  Sometimes you just have to take your lumps and STFU.  Rats fans never learn that.
Quite a number of us will not be at work on Monday, including me.  I figure, one way or another, I will be unfit for work that day.
Steel Vs Cheese
Last year at Podcamp Pittsburgh, I met fellow blogger Uncle Crappy… Great guy, for a Browns fan.  Anyway, he did a video analyzing the merits of Pittsburgh’s team icon, versus that of the Packers.
Check it out; it’s good:
Uncle Crappy has a great future ahead, should “silent movies” ever make a comeback.
Super Bowl Recaps Recapped
Last year at Super Bowl time, I ran a couple of posts about a few of the important Super Bowls in our family’s history.  With the Steelers back in the big game, I thought it was time for another look.  Part 1, covering the earlier years and the prelude to SBXL, is here.  Part 2, covering the glory inherent in attending the Steelers/Seahawks game, is here.  If you’re new to D-fish2, you really ought to see these. 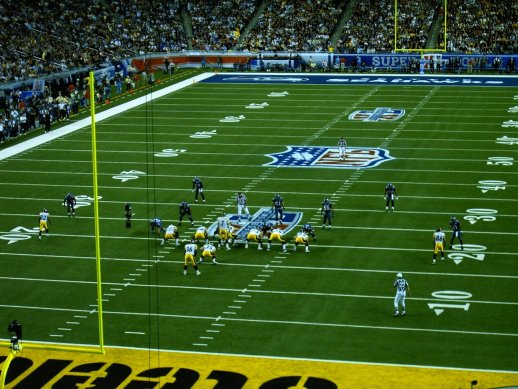 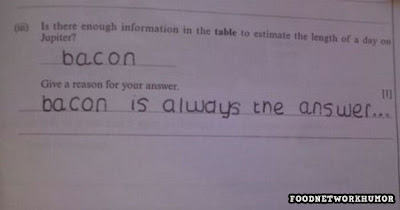 I love how whenever my friends see something about bacon, they think of me.
I used to do shit like this when I was in college.  If I was taking a test and came across a question that I had absolutely no chance of answering, I’d try to make up something funny.  I figured, if I could make the teacher laugh, I might get the benefit of the doubt on a ‘borderline’ answer I had later.  It’s kind of the same way that a coach argues a call with the ref, knowing that the ref won’t change his mind, but might give him the next one.
I had one class where we were all assigned to write essentially the same paper.  It was very structured and a series of very specific items had to be mentioned.  I figured that these would have to be the most boring papers to grade in the history of schooling.  So about half-way through, I wrote: “We now pause this report for a moment of levity…”  I went on to put in 2 or 3 little 1-line jokes I thought she’d like.
“And now back to our regularly scheduled term paper…”  I went on from there.
It worked, too!  Got a decent grade and the prof said she appreciated the break.  Sometimes, bacon IS the answer.
The Kid Does Iowa Proud
I saw a 3-minute video yesterday that just knocked me out.  It’s the testimony of a 19-year old college student before the Iowa House of Representatives.  He talks about his being raised as a child of a same-sex household, and puts to shame all the arguments about how terrible it would be for The Children, should same sex marriage find legal acceptance.  With his smooth delivery, respectful tone and just the right amount of humor, the kid knocks this one out of the park.
I’ll be back with a pre-game post tomorrow, but given how amped up I’m going to be, I can’t promise it won’t be anything more than: “STEELERRRRRRRRSSSSS!!!!   AOGKOGHOSAGHASOHEOBACONSHOEJROGUOGHBNEAAAA!
Posted by bluzdude at 1:31 PM

Another fine post. You are keeping up the Steeler Nation.

That term paper thing you do was awesome. I wish I'd have thought of something like that when I was in school!

Wow, do you ever have football on the brain! That's ok, I have my own little obsessions so it's all good. :)

While I don't eat bacon, it most definatly is always the answer. It makes life so much more simple, that's for sure.

I did shit like that, too. I figured, being raised by two college professors (step dad 3 and step dad 4) I had that merit, but also that I knew a funny answer was sometimes welcomed in the mundane.

Raven,
Really, I've cut back on football this year, as far as blogging goes. Last year I did a Pre-Game Mojo and Post Game Analysis every week. This year, I'm just doing the mojo.

However, once you get to the playoffs, everything changes. And the Super Bowl... sorry, that's all-consuming. Steelers in a Super Bowl completely commandeers a Pittsburgher's brain.

Like I said, I should be back to normal, next week. Unless, of course, we win.

Regarding the test answers... we didn't have the internet or blogs or PCs back then. If you wanted to be a wise-ass, you had to work it into your daily life.

Exactly, Cassie! Mom was a freshman English teacher... I saw her grading papers. It's bad enough when each kid can bring their own answers, but this particular assignment was structured so that every paper was practically the same as every other. Must have been a horribly dull grading process.

Of course, you have to pick and choose which profs to try that with. You know who would take it well and who would not see the humor AT ALL.

Yeah, I just want it to be tomorrow too. I killed some time this a.m. running errands, and most everyone (customers and workers) was in Steelers gear. And watching the NFL Network is not helping as I thought it would.

Thank you for including the Iowa House of Representatives speech. Every state legislature should hear such a spokesman.

Mary Ann,
And thank YOU for sending it to me! We should have more spokesmen like that IN the legislature.

Thank you so much for including the video from Zach Wahls. What a great speaker.

Bluz, I know you're like a little boya waiting for Santa on Christmas Eve. I know you've told him exactly what you want, and I hope he comes through for you. Otherwise, it's coal, buddy!

Zach Wahl's video should be manditory viewing in every classroom in America. It brought tear to my eyes.

That video of Zach Wahl was amazing. Thanks for posting it.

Killing time before kickoff watching the Pens. Gosh, I hate that siren in Washington.

DG,
The boy did his mothers proud.

Freakin' Capitals... Mike Green got hit in the head with the puck. 20 thousand Caps fans think it's a penalty.

One time I was taking a calculus test and got completely stuck, so I wrote a poem about calculus and how hard it was. The teacher gave me 5 bonus points, thus making up for the complete lack of answer on the question. Sometimes teachers appreciate a little humor and creativity.

Sounds like a computer class I took once. (Way back before PCs were prevalent. Was writing a program in "Basic" and kept getting a processing error. So I just had a dialog with the computer as it spit back error messages, threatening to turn it into a giant paper weight.

Surprisingly, I got partial credit. I thought I was going down in flames.

When I was a Small Fry, I used to get so confused and aggravated when my teachers would not accept a picture I drew, a story I made up or a poem I wrote in lieu of my assigned homework.

Mrs Bachelor Girl,
I don't think I ever tried that on homework, just on tests, when I was sitting there, under pressure. (aside from that computer thing, but I was seriously at my wit's end.)