If you’ve read this site for very long, you’ve no doubt gathered that one of my pet causes is reproductive freedom; in other words, the right for people (women) to decide for themselves what to do with their own personal bodies, without the helpful advice of the of prissy, pasty, well-to-do white men of the US Congress.
Planned Parenthood, as I’m sure you’ve heard, has been squarely in the crosshairs of the political right during this month’s budget negotiations.  The Teabaggers want funding for Planned Parenthood cut, you know, because it represents such a huge portion of the federal budget.  (Caution: sarcasm alert.)
In truth, the amount of money spent is infinitesimal.  And for every dollar spent there, the country reaps a savings of $4.00.  That makes the Teabaggers pretty budget-savvy, eh?
Their cause wasn’t helped at all, this week, when Arizona Senator John Kyl made one of those televised speeches to an empty Senate chamber and claimed that 90% of what Planned Parenthood does is abortion.
Of course, this argument has no relation to the truth, as this chart verifies: 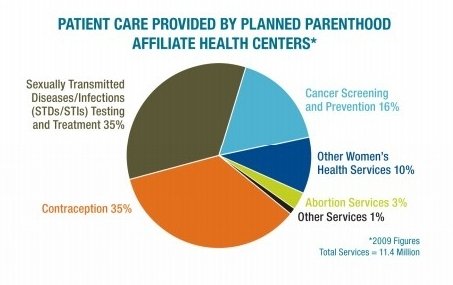 3% < 90%… a LOT <.
John Stewart got in on the action as well, ripping open the tightened sphincter that personifies Sen. Kyl.
The Daily Show
Tags: Daily Show Full Episodes,Political Humor & Satire Blog,The Daily Show on Facebook
It doesn’t surprise me that the right is making this kind of shit up out of whole cloth… they’ve been doing it for the last 10 years, at least.  And I’m not talking about fudging a percentage here and there, but just making shit up and repeating it until their idiot constituency takes it as the truth.  (See: Birthers.)
I’ve said before, if I ever become King, I’ll establish new guidelines on political speech.  (Assuming there is a need for politics at all… cuz I’LL BE KING!)  Any speech by a politician, or by an organization for or against a disputed political issue and communicated through the media… TV, radio, print or online, will be subject to instant factual verification.
It’s not like it can’t be done… it’s already being done, only on such a small scale that people don’t know it.  Every so often, an event like this breaks out and garners attention, but unfortunately it’s a rarity.  And it’s even more unfortunate that people will continue to disregard actual verifiable facts, in order to keep running with lies that they would rather believe.
What puzzles me is that Planned Parenthood should be flush with cash, if the goal of the right was to actually decrease abortion.  Birth control does that for a fraction of the monetary and emotional cost.  But still they fight… against Planned Parenthood, against Plan B contraception, against sex education, against SEX, period.  (Hey, getting caught in the airport men’s room with your “wide stance” is not “sex,” right?)
I also think that Planned Parenthood is attacked because they fight all the bullshit delaying tactics that lawmakers try to insert into the doctor’s office.  They want pamphlets passed out that are often filled with lies, exaggerations, assumptions and other elements of religious orthodoxy.  They want waiting periods that vary between hours and days, knowing that often times, women have to travel long distances to get to a clinic.  They inject emotionally loaded language and imagery into a discussion that should be about a hard look at the particulars of life from that day forward.
Next, I hear South Dakota is introducing a law that will require the woman to watch a very special episode of Oprah with her prospective child and then go to church.  (OK, that’s only 90% true.)
Then you had deposed Right-Wing Dipshit Glenn Beck come out and say that the only people using Planned Parenthood are hookers.  This is a guy that used morality and religion as the means to club his viewers into voting Republican.  Such comments show just how removed he is from the everyday life of average Americans.  Apparently his brand of religion is high on judgment and pretty goddamned light on empathy. 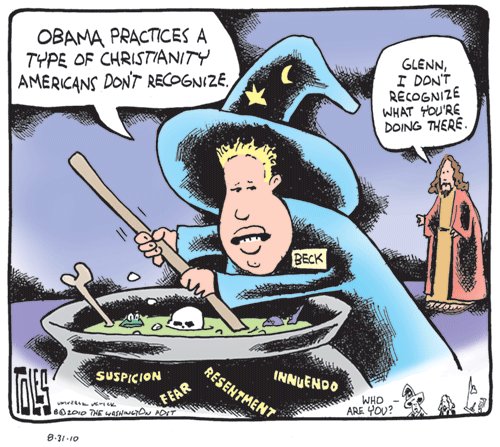 I’m just grateful that for a change, the Democrats haven’t rolled over on this one.  Did you hear about President Obama being “caught” making some comments about the Planned Parenthood fight, that he thought were off the record?  He made some remarks to a small group after a more formal statement, but the press was still receiving the feed and someone took notes.
Addressing what he called “sneak attacks on his health bill:
“I said, (to Republicans), ‘You want to repeal health care?  Go at it.  We’ll have that debate.  You’re not going to nickel and dime me in the budget.  You think we’re stupid?’”
Regarding attempts to cut funding for Planned Parenthood he said he told House Speaker John Boehner:
“Put it in a separate bill.  We’ll call it up.  And if you think you can overturn my veto, try it.  But don’t try to sneak it through.”
Also, regarding Paul Ryan, the Chairman of the House Budget Committee, who recently authored a draconian (unless you’re a wealthy business owner) budget proposal:
“When Paul Ryan says his priority is to make sure, he’s just being America’s accountant… This is the same guy that voted for two wars that were unpaid for, voted for the Bush tax cuts that were unpaid for, voted for the prescription drug bill that cost as much as my health care bill, but wasn’t paid for… So that’s not on the level.”
This last point goes directly to what I’ve been saying for the last 2 years… the deficit hawks are only concerned about the deficit when it’s not their guy doing the spending.  It’s just the political cover they’re using to reinstate their own ideology in place of the one we voted into office in 2008. 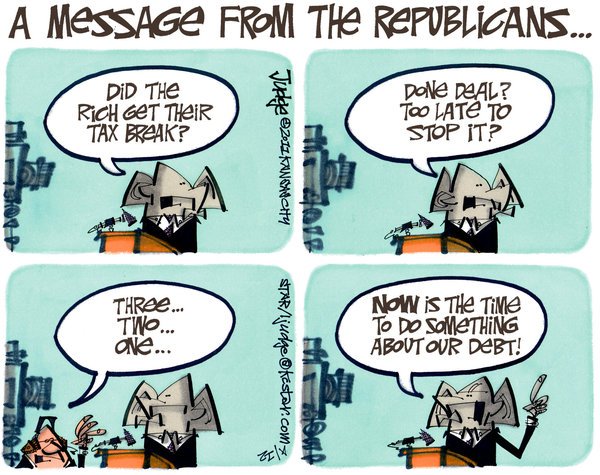 What bugs me about this whole thing is that these comments were not meant for general consumption.  This is exactly what I think the Pres should be out there trumpeting!  Call their asses out on this budgetary nonsense.  If they wanted to really affect the deficit, repealing the Bush tax cuts on those making over 250K would make a huge difference.
Sure, the big business money people would start squealing like stuck pigs and funneling even more dough into their Teabagger mouthpieces, but that’s where we have to keep hammering the facts.  Why is it that the Middle and Lower Classes are supposed to get by with so much less, but the rich expect to ride along in luxury, unscathed?  Who can actually believe that if big businesses paid Clinton-era rates (when they paid any taxes at all…) that they would then be unable to produce any jobs?  Shit, we’ve had these low high-end tax rates for 10 fuckin’ years.  Where are all the jobs then?  The companies are NOT producing jobs with all their tax savings; they’re shipping them overseas, sitting on the cash and paying huge bonuses to their upper echelon.  (And screaming about regulation.)
Why is it that we have to continue producing insanely expensive weaponry that the Defense Department itself says they don’t want, but we continue to make because no one dares say “no” to Haliburton and other defense contractors?
So of course, there is a huge push back.  Naturally, they can’t actually run a campaign based on their actual principles, so instead, the wealthy right revs up their little Teabagger squads with indefinable issues like “liberty” and scare issues like immigration, guns, gays, Muslims and the threat of mass babycide.
And one last note… if the Right was so insistent on babies being born into any circumstance, why are they trying to cut funding to programs specifically designed to help single mothers and their babies?  Maybe it’s just the overall Republican Plan… first cut the money for Planned Parenthood, which results in more babies being born into low-income families.  Then cut all the support for said babies.  I expect the next step to be to have them all delivered directly to the penitentiary, for safekeeping, long-term storage and to bolster the business of the prison industry.
The thing is, they don’t actually care about babies… not at the top.  It’s just one more wedge issue designed to mobilize people into voting against their own economic interest.  Then once in office they can get back to their primary mission of enriching their benefactors and widening the income gap between the rich and the poor. 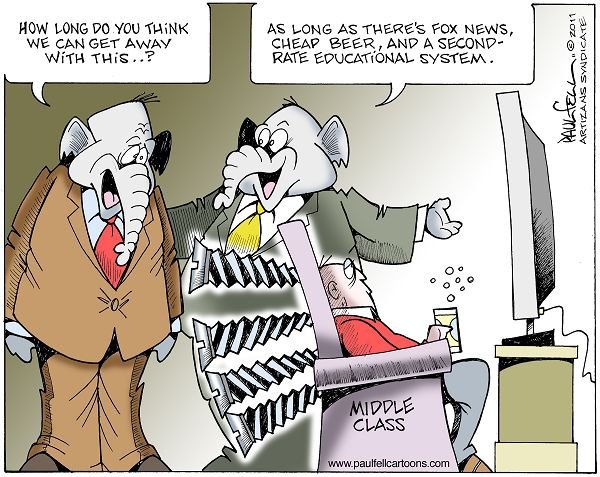 This Sunday Sermon has been brought to you by the suppression of 2 months worth of political hostility over the budget process and a serious lack of sleep.  Now I’m off to cut a check to NARAL.
Posted by bluzdude at 1:12 PM