I’ll admit that I’m not a huge baseball fan any more.  I used to be, as a kid.  But I think I watch so much hockey now, it makes every other sport seem like it’s played in slow motion.  I always have a soft spot, though, for going to a game.

One thing I have going for me here is that I live in Baltimore.  And the big advantage here is that when your team sucks, you can always get walk-up tickets.  (And I know my friends in The Burgh have that same “benefit.”)

Now, let me clear one thing up… I’m primarily a Pittsburgh Pirates fan.  Always was, always will be.  But unlike in football, the Pirates don’t really compete with the local team.  The Pirates are in the National League, the Orioles are in the American League.  Sure they may compete in the occasional inter-league game, but it’s not really a factor.  So I feel perfectly OK with being an Orioles fan.

Unfortunately for me, both of my two favorite teams suck.  The Pirates haven’t been in the playoffs since 1992, and the Orioles since 1997.  For me, following a winning baseball team is merely an fond memory of the distant past.

It’s still fun to go see a game though.  I generally see about a half-dozen games a year.  My favorites are early in the season because A) I can still pretend they have a chance, and B) July and August in Baltimore are Africa-hot.  I do NOT like sitting out there in the stands, simmering in my own juices.

So the O’s were playing a home stand last weekend against the Texas Rangers.  Because the weather was going to be decent, I contemplated going to see the game on Sunday afternoon.  The only problem was that the Penguins were playing at 3:00.  I didn’t feel like DVRing the game and trying to cram in watching it before Amazing Race started.

As it turned out, the Friday night game was rained out.  Saturday morning, I read in the paper that they were going to make it up as a doubleheader that day (4:30 and 7:30) and that one ticket would be good for both games.  Now it was a no-brainer.  I’d go down to Camden Yards and catch me a couple of ballgames.  It was perfect because the O's would be out of town the following week, then at home against the Yankees the weekend after, and that's always a mob scene.  If I didn't go this weekend, I wouldn't be able to go to another weekend game for at least a month.

I went online and got gouged by bought a ticket from Ticketmaster for a seat in the lower bowl, down the first base line.  Face value was $48, but then T-Master buggered me for another $12 for various fees and service charges.

Still, I had to remember that I was getting to see 2 games, so I just glued my ass shut again and took the subway down to the Yard.

Ever notice how much electronic shit we have to bring with us now?  Front jacket breast pocket: cell phone.  Lower right jacket pocket: MP3 Player.  (I know, I should have one of those super-duper-smart phones that plays MP3, but I don’t.  Bite me.)  Lastly, my new camera was in my left jacket pocket.  (Plus my newspaper and crossword puzzle in my inner jacket pocket, for some old school time killing.)

I was looking forward to trying out the new camera because I finally got a point-and-shoot with a decent zoom.  I was getting pretty tired of my skimpy 3x zoom.

After a going to one of the street vendors, for hot dogs and a visit to Boog’s BBQ on Eutaw Street behind right field, I stopped on the right field flag court to eat and watch batting practice.  Here’s the view from the flag court: 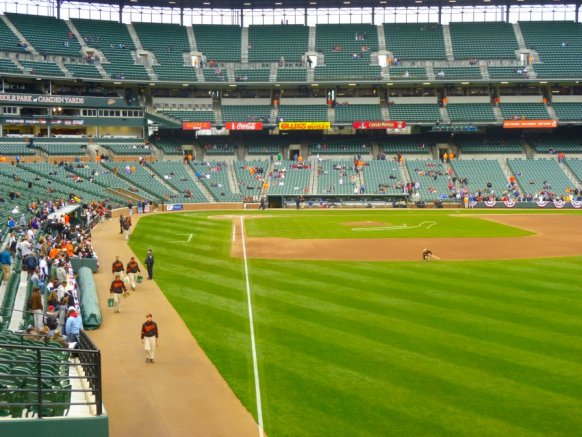 Pretty sparse crowd for Game One.

I wish I had remembered to take a picture of my pork sandwich… it was a thing of beauty.

I continued on to head toward my seat. 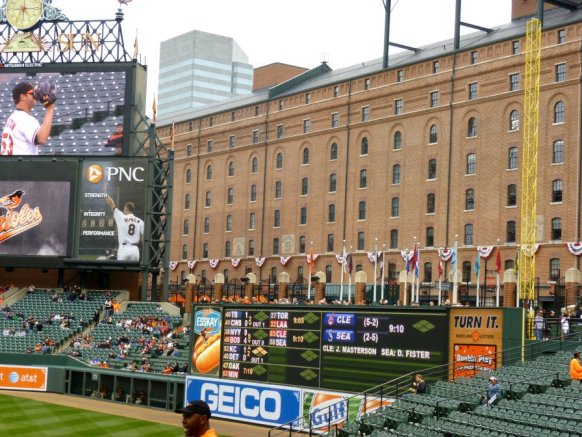 The flag court in front of the B&O Warehouse, from whence I came.

Just before game time, some of the Orioles were stretching out, right behind first base.  I went down to about the fifth row and snapped a couple of shots, mostly of these guys: 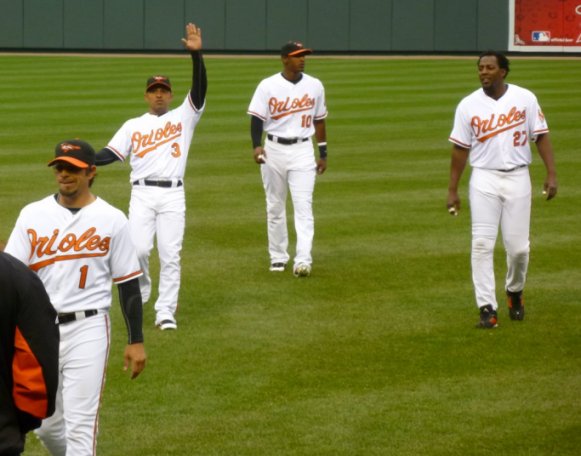 I settled into my seat and waited for the game to start.  It was kind of chilly, and I regretted not dressing warmer.  Weather.com said it would be 58 at game time, and would go no lower than 54 by the end of the night.  So all I had on was a long sleeve T-shirt, a short sleeve T over that, and my jean jacket.  OK, and pants.  But when they announced the game time temperature, it was already down to 54 and would get cooler throughout the afternoon and evening.

Luckily, I had my own irritation to keep me warm.  There were two 8-year old boys in my vicinity… one directly behind me with his Dad, and one in the row behind him, with his Mom.  They quickly made friends with each other and then proceeded to yell every thought that entered their collective heads, for the rest of the game.

(Of course Felix Pie, the left fielder is playing way off the line because a leftie is up and is likely to hit to right.) 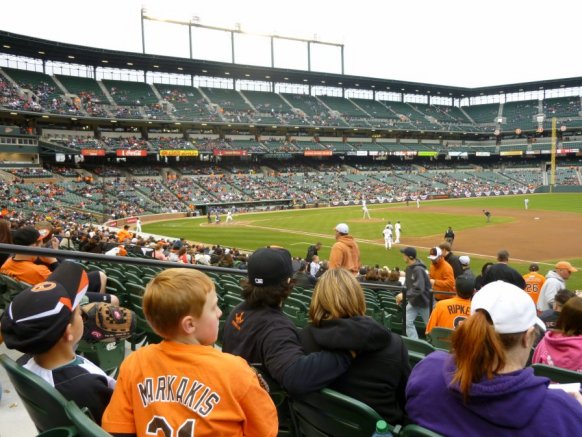 This was the view from my seat.  And by the way, those are the 2 boys in question, there on the left.  (They moved around to various empty seats until the place filled in.)

During the game, I finally go to see what the new camera could do.  I was pleasantly surprised. 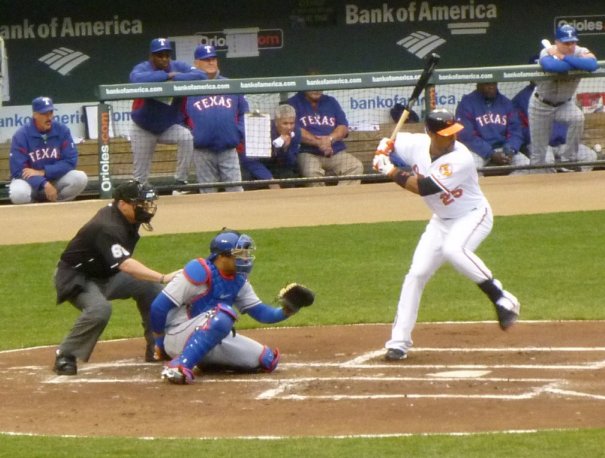 First baseman Derrick Lee.  He’s one big dude.  Was funny seeing him earlier, standing next to 5’9” Brian Roberts while they were stretching. 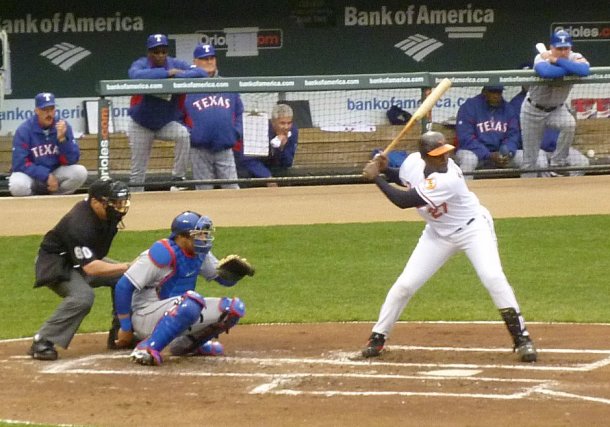 Designated hitter, Vlad Guerrero, one of the greatest free-swingers and bad-ball hitters ever.

I was trying out the burst function for the first time, where you could lay on the button and it would take 3 consecutive shots, but I was still having trouble capturing an actual swing.

The O’s won the first game, 5-0, which was a pleasant surprise.  But in the 2nd game, the Rangers were all over them and quickly jumped out to an 8-1 lead.  I did manage to get the timing right to capture a swing, but there was one problem: 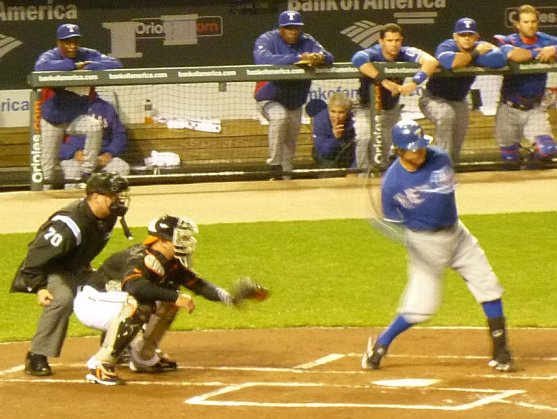 The bat disappeared.  Dude looks like he’s about to go through a wormhole.  I suspect it was the lighting, coupled with a rather slow shutter speed.

During the 2nd game, when the Orioles’ young pitcher was getting knocked around, one of the kids started screaming, RELEASE THE PITCHER about 75,000 times.  Remember, this is all taking place between 1 and 3 feet from my left ear.

I can understand the youthful enthusiasm, but is there no consideration for the other people in the stands?  I mean, it’s fine to yell with the crowd, but to keep up all the inane screaming when nothing else is going on?  I swear I started looking for a vendor would sell me duct tape and a tube sock.

I was futilely hoping that one for parents would tell the kids to pipe down, but they were as tone-deaf as the kids.  In fact, once the second pitcher got into trouble, the one Mom told the kid he should start yelling RELEASE THE PITCHER again.

That was my cue to get the hell out of Dodge.  With the O’s getting their asses kicked, and all the cotton candy rampaging through that little shit’s head and out his mouth, and the temperature dropping, I figured I’d had about enough. 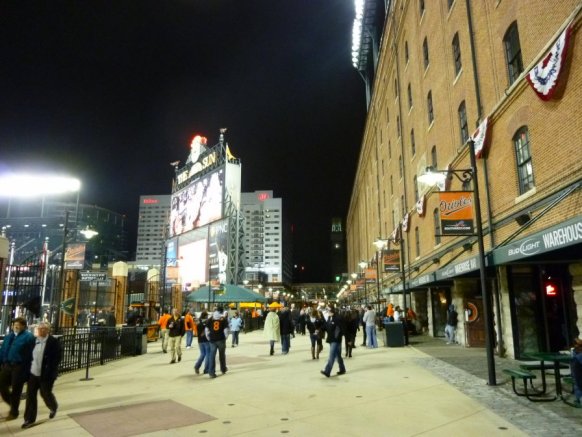 At the foot of the Warehouse on Eutaw Street, on the way out.

Earlier I had quit buying any more $7.50 beers and figured I’d pick some up on my way home, to watch the end of the game all cozy-like.  What I’d forgotten was that by 9:00 when I left, the beer place was already closed.  I’d have to scramble if I wanted any more beer.

Oh well.  Instead, I went home and reveled in the peace and quiet.

But next time, I’m bringing duct tape.
Posted by bluzdude at 8:38 PM