I’ve often thought about getting vanity license plates for my car.  It seems like that’s the official “state-sanctioned” method to show that you’re either completely self-centered, or just a wiseass.
Mostly, it’s been the cost and the hassle that’s kept me from getting one.  And the cost is about to go up in Maryland.  The state legislature just passed a bill increasing the fee for vanity plates from $25 to $50 per year!  That’s right, every year, you’d have to cut a check to the MVA.
Sorry, no thanks.  I don’t need to identify myself as a wiseass that badly… not when I can do it online for free!
But I do wonder, if I were to get a vanity plate, what would I get?
First off, you have to be careful.  Like, I’m sure this person thought their love of David Sanborn or Grover Washington would come across in this plate: 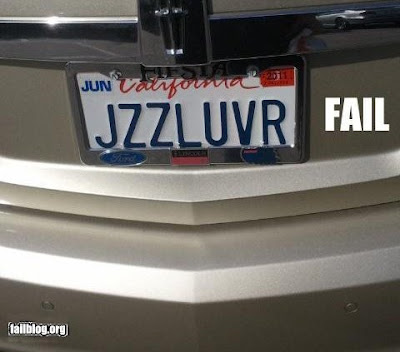 Instead, it just looks like they want to “love” David Sanborn or Grover Washington… love them long time.
I’d also have to be careful about using any Pittsburgh references.  That’s a good way to get your tires slashed and doors keyed, around here.  I only decorate my car with Bowling Green State University alumni decals, because no one gives a rat’s ass about the MAC Conference schools.  We fly right under the radar.
I should probably take notes from my Uncle Joe, who is the King of Vanity Plates.  He used to have a plate that said, IWEWEYQ.  And parked beside that was my Aunt Linda’s car, with a plate that said, NIYQTOO.  That was how I knew they had lived in California too long.  Unc’s plates weren’t all cutesy… he had one on his Ferrari that said, FMLY 4RE.  Of course when you see someone driving a Ferrari, who ever looks at the plates?
I’d consider getting a plate that had some variation of BLUZ on it, but first, I’m sure it’s been taken, and second, that could possibly identify me in public to some rabid teabagger who may try to run me off the road for crowding his liberty.
Speaking of, I wonder if this fellow understands the implications of what he’s suggesting: 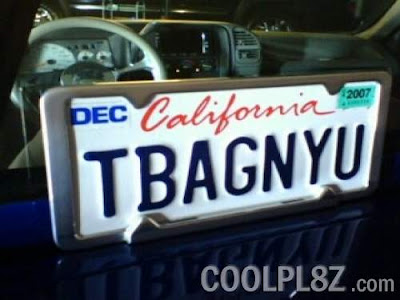 Then again, it’s a California plate, so I’m guessing he does.
I used to know a girl in Virginia that was also a blues fan.  She didn’t do a vanity plate, but the VA licenses had a picture of a colonial dude in the middle of it, so she took a marker and drew on some dark shades.  I thought that was cool as hell, although she’s liable to get pulled over for it.
Bluz Sister has a plate that says INNY.  It’s on the back of her Audi.  Yes, it took me a while too.
One of the most creative ones I’ve heard of takes some high school chemistry to decipher.  It said, HIYOAG, which looks meaningless until you realize that AG is the Periodic Table designation for silver.  I love the “thinkers.”
I was looking through an internet site for some other cool ideas and found this one (as well as the previous plate picture): 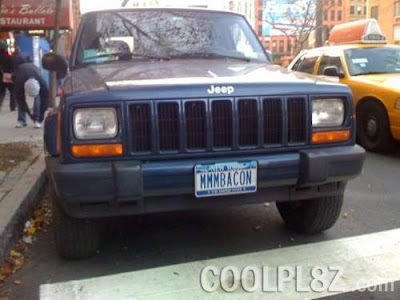 I can steal that as long as I don’t live in New York, I guess.  Hey, I wonder if that’s Homer Simpson’s car…
You should check out the site… there are too many good ones to list here.  But I was surprised at how many off color ones made it through.  I thought it would be tougher to put something over on the Powers Charged With Making Sure No Citizen Ever Gets Offended.
Now I’m thinking that one of my ideas might be workable.  I’d like a plate that says, QQQQ.  Which is a sneakier way of saying 4Q.
Oh yeah?  4Q2.
Ultimately, I’d probably go with this one: BBBBBBB.  In other words, the sound one makes when driving.  When one is 3.
Or you can call it homage to the noise you make when you’re going crazy sitting in traffic.  Just make sure your fingers weren’t in the ashtray before making the noise.
Posted by bluzdude at 8:14 PM