Last night was the onset of the Stanley Cup playoffs, so naturally the topic of the Penguins’ Cup run came up in an email thread between Sitcom Kelly and me.  You’ll remember that Sitcom Kelly is my friend that wants to dig a Silence of the Lambs Pit in her basement for the purpose of capturing and keeping Penguins defenseman Kris Letang, as well as former Steelers kicker Matt Bahr.  We’ve been working on and off, on a document full of episode ideas to make into a sitcom about her life.

First, I sent her a link to a really great story.  A reporter wrote of taking her wheelchair-bound brother, who has cerebral palsy, to a Penguins game. By chance, Penguins star Sidney Crosby pulled in behind them when they parked at the rink.  Sid initiated the communication by asking about her brother, (who happened to be wearing a Crosby jersey), and got out of his car to give him an autographed picture and pose for a shot of the two of them.

This comes on the heels of my Blog Sister Cassie’s story about how her 3-year old sent Sidney, who has been sidelined since January with a concussion, a hand-made get-well card for the “boo-boo on his brain.”  Sid sent her back an autographed picture, which she has been carrying around like a security blanket ever since.

It was yet another of a long line of little but important things the guy does off the ice, just to make people happy.  I’m sure he had no idea that it was going to wind up in a newspaper story.  It’s just the kind of things he does.

So, I emailed the link to Sitcom Kelly:

SK: Tears gushing from my eyes…

SK: I was going to say that he needs a Pit too, but he’s worthy of a glass case in the living room.

Bluz: Mmmmmmmmmph!  (Clamping hand over mouth to suppress the laugh…)  That’s totally an episode!  And your other “guests” in their Pits get jealous of him and argue about who gets to be in the glass case.  They fight for the honor…

Later in another thread…

SK: Now get the hell on the ice and win us a Stanley Cup!!

Bluz: I don’t think he’s going to get into this series.  A lot of people are debating whether he should even come back at all in the playoffs.

SK: I can see that point, but he’s awesome enough that he could come back and play like he’s never been gone.

Bluz: The concern isn’t that he won’t play well, it’s that one more head shot this season could put him out much longer, maybe even for good.

Bluz: LOVE The Case.  You could bring him up for parties… like your cat parties!  (This refers to a previous email thread/post about her throwing a party on the same day as a massive snowstorm (again) and no one would show, leaving her to continue the party with no one but her cats, and Kris who is down in the Pit.)

I can see it… You, the 3 cats wearing little party hats, are sitting in a circle on the floor with a pan of ziti, and Sid in the Case.  With a hat on top of the Case!  LOLLLLLLLLLLLLLLLLLLLLLLLLLL… Oh god, I’m dying here…

Geez, the script practically writes itself… which is good, because I have posts to do and TV to watch.

This morning, I emailed her again:

Bluz: BTW, you know I’m using our thread on The Glass Case in tonight’s post.  Can’t possibly keep that to myself.

SK: There are going to be Secret Servicemen casing your Memorial Day BBQ event, waiting for Sitcom Kelly to show up.  Kris Letang is one thing, but if you mess with Sidney Crosby, they WILL come get you.

SK: A couple of guys too.

Bluz: That would totally work!  The name goes both ways.

Meanwhile, Spartacus rolls over in his cinematic grave.

Like I said earlier, the playoffs started last night.  For what it’s worth, the Pens won the first game, 3-0.  But I have no intention of going all Puck-head with game details… not when I can talk about jersey mojo, instead.

All year long, I tracked my jersey versus the game results.  It’s a bit different than football, in that there are so many more games.  I figured the tracking would give me some pretty good data on what to wear during the playoffs.  Here’s how the season played out: 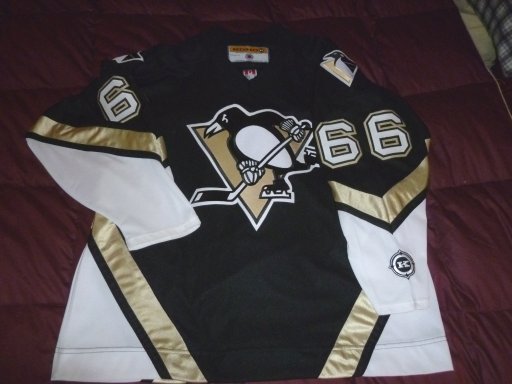 Mario Lemieux jersey from the pre-lockout era, early 2000s.  Geez, I should have worn this one more often.  Didn’t realize it was undefeated.  And add one playoff win, because I wore it last night. 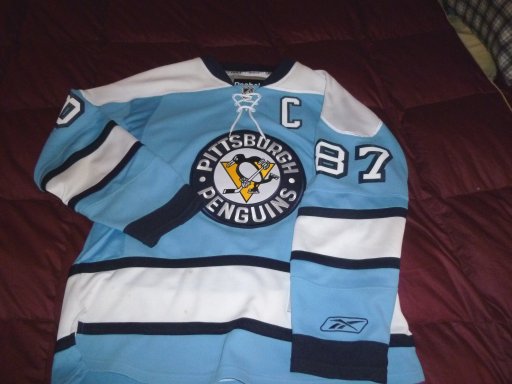 Crosby jersey from the first Winter Classic in 2008.  I only wore this one when the Penguins wore it to play.  I didn’t always know ahead of time; sometimes I’d have to make a quick change after I saw them line up for the faceoff.  Had a good record wearing it… I may go to it as an alternate.  But I prefer not to clash with what’s being worn on-ice. 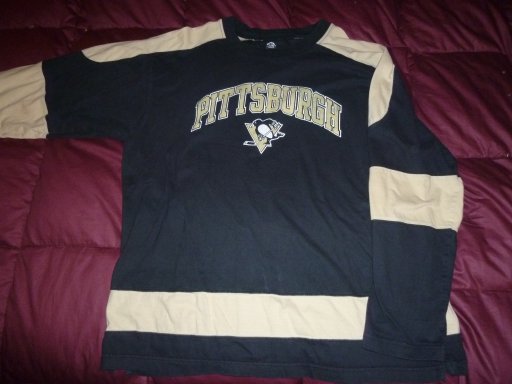 OK, it’s not a jersey, but during one of the Pens early slumps, I tried it out because none of the jerseys were working.  Did pretty well. 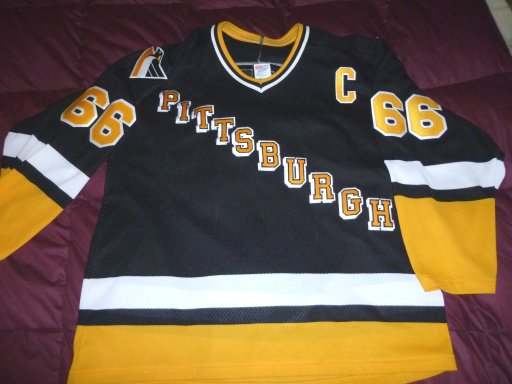 The old-school Snoop Dogg style Lemieux jersey from the mid to late 90s.  Didn’t wear it often… I do remember yanking this one off for the blue one a couple times, as mentioned earlier.  Another possible alternate. 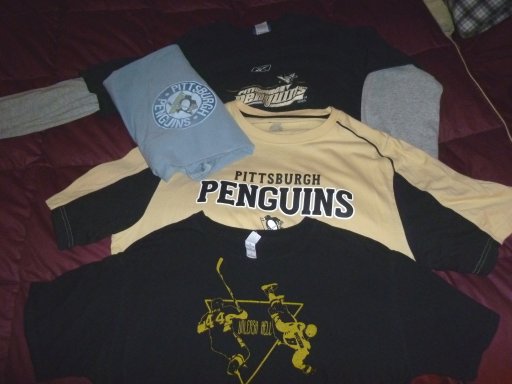 No jersey at all.  These are some various Tees I wore… Just about everything I wear has a sports logo on it… I used these during the mid-season doldrums, when I didn’t feel like digging out a jersey, and they won a good deal of the games, which kept me from going back to the jerseys again. 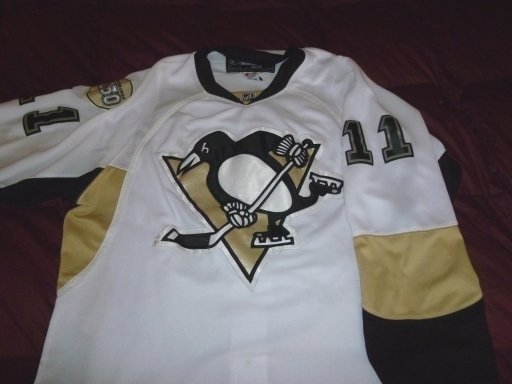 6-4, .600
Current “away” jersey for Jordan Staal.  This was my go-to jersey for Penguins “away” games.  Had a tough early run, especially when Staal was out. 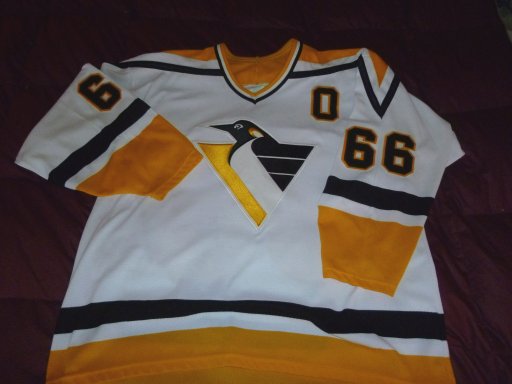 AKA, “The Corporate Pigeon” jersey, used during the mid to late 90s.  Used to be a #68 Jaromir Jagr jersey.  I had the 8 taken off and added a 6 to make it a Lemieux.  Also added the “O” for “owner.”  I am aware that it might be considered a “jersey foul,” if you follow the Pittsburgh Post Gazette’s “Empty Netters” blog.  It’s my oldest Pens jersey… I actually used to play in it, when I played pickup hockey in the mid 90s.  Didn’t really get me many wins this season though.  But it is my only other “away” jersey.  When neither this nor the white Staal jersey produced wins, I didn’t wear a jersey for a bunch of the “away” games. 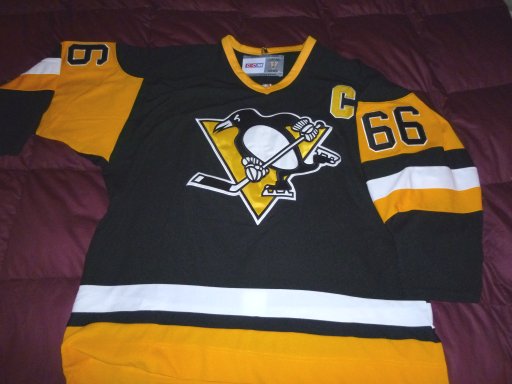 Old “home” jersey from the early 90s Stanley Cup winning teams, another Mario.  Can’t go wrong with a legend.  You know a #66 will be good forever. 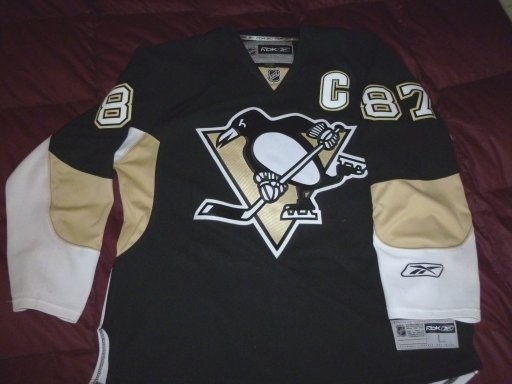 The current “home” Crosby jersey.  Horrible record, and that was with Sid playing.  I haven’t worn it since he got hurt.  (I was wearing the Snoop jersey when he took his second shot to the head that put him out.) 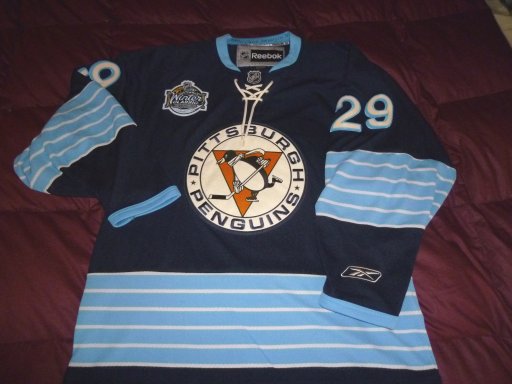 2011 Winter Classic jersey for goalie Marc-Andre Fleury.  Again, I only wore this one when the Pens did.  The results were not good.  Doubtful this will see the light of day during this playoff run. 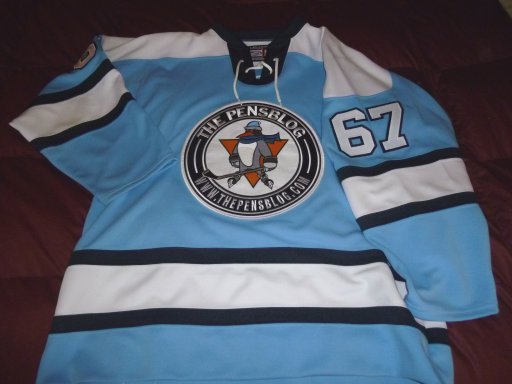 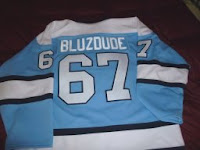 Blue jersey created by The Pensblog.com.  I bought it because I couldn’t get my hands on a regular blue Winter Classic jersey at the time, but I wanted something the same color.  I had this one personalized.  I only wore this once this season, as a desperation ploy to shake off a losing streak.  Didn’t work.

So, as the playoffs unfold, I expect to be using the jerseys at the top of the list.  But I have to keep in mind… mojo is fickle.  Remember, during the Penguins Cup run in 2009, I abandoned the jerseys completely, in favor of Pens Tee Shirts, and was rewarded for my adaptation by the sight of my boys lifting The Cup in triumph.

Sitcom Kelly may even let Sid out of The Case, for that.
Posted by bluzdude at 7:22 PM