My last post was about how I got my guitar: I won it at a big company meeting and it was presented to me on stage.  I had the opportunity to play it for everyone, up on a stage, plugged into a giant Marshall stack.  Unfortunately, I didn't know how to play a guitar so the moment was pretty much lost.  I’ve regretted it ever since.
This post is to make clear that while that stage was the scene of one of my biggest regrets, it was also the scene of my greatest triumph.  I was called upon to make a presentation to the same group of Regional and District managers and I killed.  Killed!  Here’s the deal…
It was the year following the guitar episode.  Our “Merchandising” department had a new VP, a guy brought in from the toy industry.  I still worked closely with my mentor, Vinnie, the singles buyer, but we both reported to the new VP.
The Merchandising department was given an hour of time, to make a presentation to the whole group.  The VP would go up and make some introductory remarks and then turn it over to seven of his people, who would each give a 10-minute spiel on their area of expertise.  I was one of the seven and we would all be sitting up on the stage as the others presented.
While I tend to shun the spotlight, I was perfectly OK with this.  I knew my shit and I knew what I wanted to say.  But I also knew that my shit was pretty dry.  If I’m going to have my ass up on a stage, I refuse to be boring.  So I came up with a couple of introductory paragraphs that was just plain comedy writing.  I felt it would be a good way to butter people up enough to accept the thrust of my talk: “Stop spending so damned much money with outside vendors.”
I wordsmithed the opening bit probably more than the meat of my speech.  The timing had to be just right.  I rehearsed it a number of times at home to make sure I had all my inflections just the way I wanted.  It was one of those rare times where I felt my degree in radio production wasn’t a complete waste of time.  I certainly knew how to mark up a script to enhance the reading.
But even though I was ready, I was still tweaking my opening, even on the morning of our presentation.  The Loss Prevention guy that went on before us mentioned something about the trick speakers use to put themselves at ease: picturing the audience in their underwear.  I knew I could use that.  And it’s always a good idea to work in something that’s fresh… it gives the illusion that you’re right on the ball and up on things.  So as he was talking about underwear, I was scratching more notes onto my speech notes.
So, there we were at the appointed time.  The seven of us were all up on the stage, sitting in folding chairs and the VP came up for his opening remarks.  He then rambled on for two goddamn hours!  He yapped right through all of our time and deep into the time belonging to the VP of Marketing.  (And from what I was told later, she was seriously pissed!)
Then after this mind-numbing yak-a-thon, he had to gall to turn to all of us up there with him and say, “OK, wrap your stuff up quickly; we’re running long.”
Motherfucker!  I was steaming mad.  Luckily, I wasn’t the first one to go on so I had time to calm down and consider the job at hand.  And I also had to consider what I should do.  I could easily cut my time down by about a third, if I skipped the comic intro.
It was decision time.  And I’m sure you know what I did, too.
That’s right, I did the whole thing.  I figured, “Fuck him, I worked hard on this bit and it’s exactly what this audience needs right now.  They need something to bring them out of the coma.”
So when it was my turn, I let it rip.  I started by mentioning the Loss Prevention guy’s underwear trick.  I said I do the same thing, except that in my eyes, “you’re all wearing your underwear on your head.”
Their laughter encouraged me, so I continued with some more stuff I added that morning.  The LP guy’s speech included material on EEO laws, so I worked that in too.  I said “I never planned to end up in this job, but I was an EEO hire, to fill the quota for the Follicle Impaired, because the Regional Managers don’t count.” (4 of our 5 Regional Managers were acorn-heads like me.)  That damn near brought the place down. 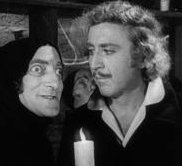 I went on to do the rest of the stuff I’d planned.  I wove in Monty Python references, referred to myself as playing "Aye-gor" to Vinnie’s "Dr. Fronkonstein," and generally performed like I was doing a standup act.  I only wish I knew what the hell else I said.  I had meant to keep my script, but I lost it in one of my planned bits.  After one line where I knew I’d get laughs, I took the top page of the script and tossed it back over my shoulder.  That was fine… but I forgot to go retrieve it afterwards.  That was the page that had all the “material.”
The funny thing was; I was never nervous when I was doing the shtick.  I never got nervous until I was well into the meat of the presentation… the stuff where I knew what I was talking about.  I think it was the adrenaline wearing off and I was coming down.  They couldn’t see it from the seats, (I asked), but my hands started shaking like crazy.  And it didn’t help when I spotted our company CEO slip in the door about half way through.  But I got through it… I lightened the mood, I dropped some knowledge, and I got off the stage.
After my bit, the VP got up and said that due to the time, the rest of his team would make their presentations the following day, and right now it was time for lunch.  As we left the auditorium, I wondered how my bit was received by the execs.  I mean; I did defy my boss and spent five precious minutes catering to my sense of whimsy.
I didn’t have to wait long to find out.  I could barely turn around in the lunchroom without someone clapping me on the shoulder and telling me how good my bit was, and how much it was needed!    People were recreating the scene for me, from their vantage point… “First the VP gabs us to death for two hours and suddenly there’s this guy up there who’s just ‘bringin' it!’
Even the Regionals, of whom I’d made sport for being as bald as I was, made it a point to come up and congratulate me.  (I think they just liked being mentioned.  Judging from the skit they put on at the next meeting, I have them all pegged as frustrated song-and-dance men.)
In the following weeks, I heard from people that weren’t even there, who would tell me, “I heard you killed at the meeting last week…”
My favorite response came to me second hand.  A co-worker of mine was sitting right behind the Regionals and while I was up there doing my routine, one of them turns to the other, shrugs his shoulders and says, “Who knew?”
Another of my co-workers still had to do her presentation and asked me if I could give her some jokes to do.  Seems I’d found my niche.  The VP never said a thing to me.  I think he realized I'd saved him by changing the mood in the room.
It was without doubt, the high point of my career with that company.  The following year, I was laid off with about 20 other people, as a part of a major cost-cutting operation.  The old windbag VP was gone and one of the Regionals took over.  The same guy that said, “Who knew” was the guy that decided to bring in some kid from a store, pay him half what I made, have me train him and then shitcan me.
You know, he was the one Regional that wasn’t bald.  Perhaps he felt left out.
Or maybe bald guys are just naturally nicer human beings…
Posted by bluzdude at 12:40 PM