You probably haven’t noticed, but I have one of those little Country Trackers down at the bottom of page, that automatically tallies the traffic that visits, by country.  I installed it in August of 2010, I believe.  (As of this writing: 28,364 hits from 130 countries.)
As someone who is fascinated by statistics and data, I enjoy parsing out the information.  This was especially true when I first installed it.  I loved collecting the different countries and got a special [Sqeee!] every time a new one turned up.
I also noticed some odd groupings and mentally perceived them as mini competitions.  For example, obviously the US provides the most hits… that’s not even a fair race.  But the race for second between Canada and the UK?  That started off very close, although Canada has steadily pulled away, leading the UK 1222 to 1131.
I also found that the Scandinavian countries seemed to group themselves tightly, especially at the outset.  Now it runs: Sweden (88), Finland (61), Norway, (51), and I’ll throw in Denmark (64).  Perhaps Norway would be doing better if I counted Cassie’s hits there.
Sometimes some odd designations show up, like Europe (4), or Asia/Pacific Region (9).  Can they not be any more specific?  If they're going to be so indistinct, why not make one “Western Hemisphere" and call it a day?
I understand that Georgia (12) is a distinct country, but what the hell is Jersey (1) doing in there?  Does “Snooki” now count as her own country?
Then there are the "odd couple" countries, like Bosnia and Herzegovina (4).  Since when is “and” part of a country name?  I don’t like it, but it seems to be catching on.  There’s also Trinidad and Tobago (5), St. Pierre and Miquelon (1), Antigua and Barbuda (1), and Turks and Caicos Islands (1).  Are these like “couples?”  Did two neighboring country governments get together and be like, “We can’t pull this off alone so how ‘bout we get together?  We take police, schools, fire houses and embezzlement, you take taxes, roads, property zoning and bribery.”
Sometimes one place seems to show up under two names.  On one hand there’s Malaysia (36) and on the other hand, there’s F.Y.R.O.M. (12), which reports under my StatCounter service as Malaysia.  Do we really not have enough acronyms that we have to add them to countries too?  (Not including the USA, of course.)  I’ll see your FYROM and raise you a CDROM.
Every time I see Colombia (18) come up, I pretend it’s a hit from Sofia Vergara. [Squeee!]
It gets most interesting at the bottom of the list and I just start riffing with mental associations… and also wonder how in the hell they got here!
(28) Pakistan: I’m pretty sure this is all either spam or searches for South Indian Aunties.
(13) Slovenia: They should get together with Slovakia… they’re only 2 letters apart.
(8) Latvia: Dr. Doom’s country.
(7) Estonia: Where Pauly Shore said the caveman they found was from in “Ensino Man.”
(7) Malta: Sounds like what you get a an Italian soda counter.
(4) Sudan: Holy shit, someone has time to spare from starving and being beaten to death to look up Steelers jersey mojo?
(4) Isle of Man: Sounds like a hippie commune.  What are women called on the Isle of Man, 'Manwomen?'  'Mannettes?'  'Manatees?'  It's all so confusing.
(3) Qatar: Hero, the new Arabian music video game.  (Hey dudes, you forgot the ‘u’.)
(3) Mauritius: sounds like a disease.  “I came down with a case of Mauritius but I got a shot from the clinic and it cleared it right up.”
(3) Yemen: Skeeves me out.  It’s like semen that carries only the Y chromosome.
(2) Azerbaijan: The President of Iran is now his own country?
(2) Moldova: Sounds like a damp, fungusy place.  Wait...it's where green eggs come from!
(1) Mongolia: Home of the clusterfucks.
(1) Andorra: Home of the big blue avatars.
(1) Oman: Man Oman Oman.
(1) Brunei Darossalam: I think that’s the French First Lady’s maiden name.
(1) New Caldonia: New Caldonia, what makes your big head so hard?
(1) Cayman Islands: Aw, isn’t that nice?  Some robber baron stopped stashing his shell corporation profits long enough to come say hi!
(1) Haiti: This had to have come from a cell phone.  I don’t think they have electricity yet.  Isn’t there an earthquake or hurricane blowing shit up there every other month?
(1) Nepal: Looking for hot Yeti Aunties…
(1) Ghana: Rhea… you know, the big birds?  I’m just glad I haven’t seen a country called “Dia.”
(1) Liechtenstein: Isn’t that the Rent-a-Country?  But I always think of Dr. Liechtenstein and his assistant Ayegor.
OK, that’s enuff’a that.
The Mojo Boogie
Today is Steelers playoff Sunday, against the Broncos at 4:30.  You’d think I’d be frothing at the mouth over this but so far, I just can’t summon sufficient froth.  (Sufficient Froth would make a good punk band name.)  The Steelers are so banged up… Even if they win this afternoon, I don’t see them then going up to New England and beating the Patriots.  I mean, I know they already beat them this season, but the Steelers were at full strength then.
Their QB is hobbled, starting safety can’t play at the high altitude (or he may DIE), starting center is out, one rushing linebacker has been gimpy for 2 months with a bad hammy, starting running back is out, 2 backup cornerbacks are out, and that’s just the major stuff.
So I’ll be rooting hard; I’m just keeping my expectations low.  My primary concern with this year’s playoffs is that someone has to beat the Ratbirds, preferably without them getting to the Super Bowl.  I can’t live with the crowing that comes with a Ratbird Super Bowl run.  I lived through it in 2000 and it was excruciating.
Today I’ll wear some gear that worked previously when the Steelers were away and I watched from home, only with a tweak to the tee shirt. 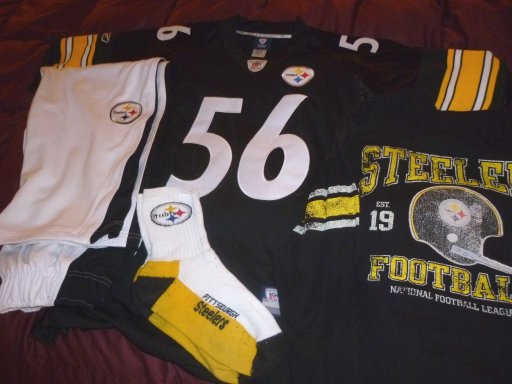 #56 Lamarr Woodley jersey, throwback long-sleeved tee, with white Steelers sweat pants and Steelers socks.
The Stinger
Now, as a reward for going through all this nonsense today, I’ve got a treat for you.  Way back in The Day, I came across this blues CD by Rod Piazza and the Flyers.  It was all good stuff, but there was one track that just killed.  It was a cut called The Stinger and it was the most wicked boogie-woogie piano solo you’ll ever want to hear.  Accompanied by the drummer, Rod Piazza’s wife, Honey, just tears up the keyboard.
I don’t know why it took me this long to look for it on YouTube but I wasn’t disappointed when I did.  There were several versions, including one that looked professionally shot, but I liked this one because is focused on what I most wanted to see: her hands.  Her left hand working on the low keys looked almost possessed.
Do yourself a favor and check this out.  You won’t be sorry.  This is what serious talent sounds like.
As Rod said on the CD after this was played, “If ‘at wuddn’t a boogie, you aint’ goan hear it heah tonight!”
Director’s DVD Commentary: If you like The Stinger, click here for a video from the same gig, where Honey shares her keyboard with a young girl I take to be her daughter.  They both tear it up together!
Posted by bluzdude at 12:06 PM