As this month has been the dog days of blogging, where everyone has something better to do than linger on the Internet, I’ll keep this one short.  (OK, it’s a goal…)

It wouldn’t have been my original intention to go to another Orioles game on such a hot day, but sometimes fate intercedes.  My company bought about 90 seats for Saturday’s game against the Kansas City Royals and threw them out to the first people that emailed in to say they wanted them.  Obviously, I was all over that.

The only question was where they were going to be.  But I had my suspicions… 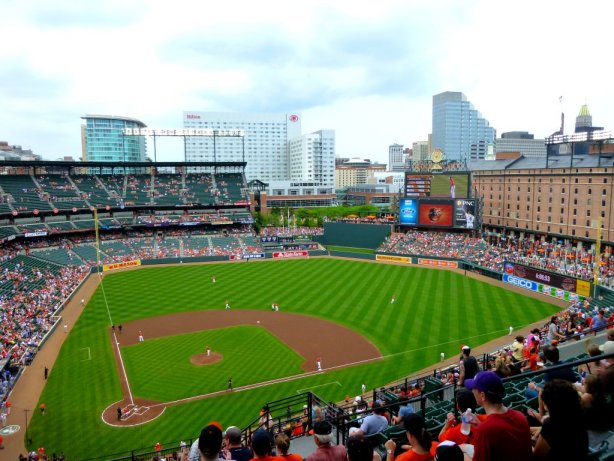 The funny thing was that my boss also got tickets for her family.  I thought we’d be sitting nearby, but it didn’t quite work out that way.  Her tickets were down in the lower bowl, by the Orioles dugout.  So I got to tease her all week about her high-falutin’ “Executive Seats.”  I’d say, “Yeah, like they’re going to put all Executive Floor and Corner Office people up in the nosebleeds with the rest of the riffraff…”

Side note: It’s really cool when you can tease your boss like that.  I am really lucky in that respect.

Anyway, a free ticket is a free ticket and this one saved me the per-ticket face value of $13.  OK, I should probably add that it also saved me all the ticket-purchasing fees from Ticketmaster, which brings the savings up to around $47.50.  I have to remember that there are poor starving children in Mississippi that don't get to see any pro baseball.

So with Pinky working on Saturday (and not really caring much for baseball) I turned to my go-to wingman, Sitcom Kelly.  She had a birthday recently so I figured I’d make the day into my birthday present.

We got downtown about 2 hours before the game, so that left us plenty of time to drink beer on the cheap.  We ducked into our favorite ballpark-friendly watering spot, The Bullpen, and proceeded to knock down $2.50 Miller Lites and eat pizza.  It was there that she mentioned that one of her other friends gave her a $100 gift card at a liquor store, for her birthday.  I think this was her way of letting me know that I wasn’t going to get off light by getting her liquored up at the bar; I’d still be on the hook for the ballpark beers.

But while we were at The Bullpen, I spotted something weird down on the end of the bar. 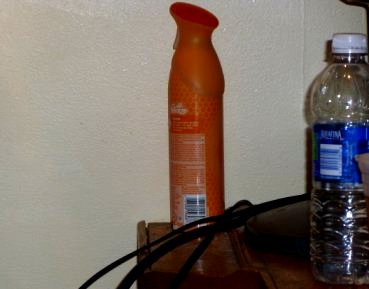 What the hell is THAT?

It looked like a big pink can of aerosol penis.  WTF?  I mean; I saw the big cone on the top, so I figured it was some kind of spray, but what was with the bulbous end just under the cone?  It wasn’t until I got home and blew up the picture that I got to the bottom of the mystery.  Seems it wasn’t spray-on schlong after all… 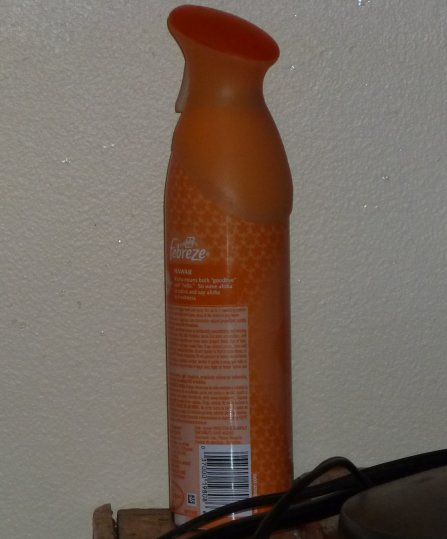 As for the game, the Orioles blew a 3-0, 4th-inning lead and lost 4-3.  I felt bad for the pitchers because the Royals seemed to get guys on base in the weirdest ways.  The worst was a swinging dribbler that rolled right down the 3rd base line and as the players waited for it to roll foul, it came to rest dead on the line.  Meanwhile, the batter ran to second for a 78-foot double.  Totally not fair.  Later, another guy hit a popup that landed right between three players, for another hit.

A more pressing concern, more so than the on-field foibles, was the heat.  Saturday was the first hot, muggy, typical Baltimore summer day.  At the beginning of the game, we were up high enough that we were in the shade of the upper deck roof overhang.  Round about the 4th inning, we moved up about 10 rows and by then, there was significant cloud cover.  Would have been horrible sitting there with the sun beating down on us, but the clouding made it tolerable.  It was still quite humid, but we were certainly well hydrated.

Obviously, from this vantage point, I was not going to make it onto TV again… not unless I dove off the deck or something.  Luckily, I didn’t have to do anything nearly that dramatic to get the Beer Man’s attention.

That’s all I have about the game day experience, but just let me throw this one more Camden Yards note out there.

HBO has a new series running, called “VEEP”  (Sundays, 10:00 pm, with rebroadcasts all over the place.)  Julia Louis-Dreyfuss plays sitting Vice President Seline Meyer in this slice-of-political-life comedy.  It’s not like “’Elaine’ or ‘Old Christine’ plays VP;” it’s a lot more clever than that.  Think “The West Wing” played for laughs.

Another cool side note: the VP’s Chief of Staff is played by Anna Chlumsky, who is best known for starring as a little girl in the movie, “My Girl,” with MacCauley Culkin. 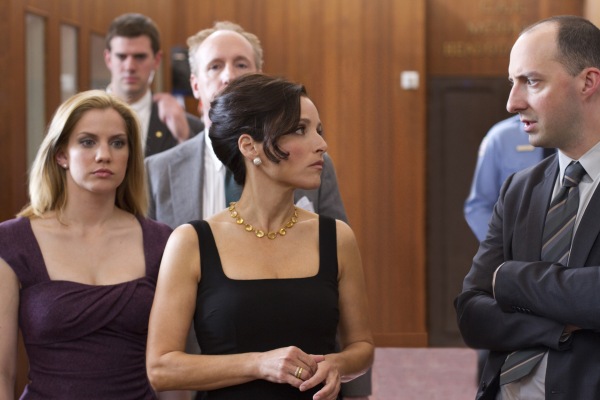 Boy, did she grow up real good…

Anyway, “VEEP” was filmed in and around Baltimore, which in most cases, stands in for DC.  But on tonight’s episode, the first 2/3 of the show takes place at Camden Yards, where the VP is supposed to make an appearance and meet some players.  There’s also supposed to be a scene in the Eyesore Hilton, which can be seen in the middle of the first picture in this post.  So yay, Baltimore!

I give this series the ol’ bluzdude thumbs-up.  I’ve been greatly entertained by “VEEP” so far, but I add this one word of caution, or as I might put it, an F-word of caution.  Put the kiddies to bed before watching; the show is riddled with F-bombs, most of which are from the VP.

Okay, the Carpetbagger has another brush with fame (without letting any of it rub off on him, of course). I knew Anna when she was around 8 years old. I was working at a dinner theater as a sound technician and she was the smallest orphan in our production of Annie. Her cuteness, of course, practically stole the show. Then, we watched as she became more famous than any of the other actors we worked with.

I'll do a post on this at some point because there are three former acquaintences who are one shows I watch these days.

Dude... you have to tell these stories! I'll all ears and I promise not to call you a fame whore.

VEEP sounds interesting but I don't think we get HBO so I'd have to catch it on Netflix. Is Julia Louis-Dreyfus from Baltimore? I remember a Seinfeld episode where she (Elaine) wore an Orioles hat in the owner's box at Yankee Stadium. Thought it was just comedic fodder at the time (like David Puddy as a Devils fan), but now I'm starting to wonder...

I know I shouldn't say this as a paranoid Red Sox fan, but go Orioles! I hope they can bounce back and make the AL East interesting. It would be nice to see them in October and not the damn Yankees for a change.

Also, that Febreeze can looks creepy!

It must have been a contrivance because she was born in New York City. They're just filming here because Baltimore is a good visual stand-in for DC, but much cheaper.

I'm glad the O's are making things interesting but I still expect a mid-summer collapse. In fact it may have already started... they just lost 2 of 3 to the freakin' Royals. But they're taking the right steps now, by locking up their good young talent. Like Adam Jones just signed a 6-year big bucks deal this weekend.

I'm so glad that was Fabreeze, instead of some kind of Peen Spritzer.

I love VEEP and did not realize the Anna Chlumsky connection until I read your post. We were in NYC for the weekend and it was super hot today! Saturday too was warm but today was downright HOT!

I wanted no part of going outside today. Stayed in all day. This was one relaxing Memorial Day.

Hope you had fun in NYC. Such a cool place to visit.