Mother's Day at The Yard

I hope everyone had a happy Mother’s Day.  I truly don’t know how you manage to do the things you do, what with having little ones running around (now or in the past).  I attribute it to a series of daily miracles.

Having just left from seeing my mother in Florida, I pretty much had a free slate this weekend, so I went to see another Orioles game.  Yes, this is another baseball post, but not really, because I not going to write very much about actual baseball.  As you know, I like to show up early and then wander around, taking pictures of whatever I think I can make interesting.

But first off, let me just say that I did manage to acquire a Pensacola Blue Wahoos hat.  I could have gotten one when I was down there last week, but was told that they wanted freakin’ $40 for them.  I thought I could do better so I waited.  Then I found them for sale online, for $32.  I was very excited until I went to process my order and noticed the $9 for shipping, bringing the total to $41.

But what the heck, I really wanted one.  See, they’re pretty cool. 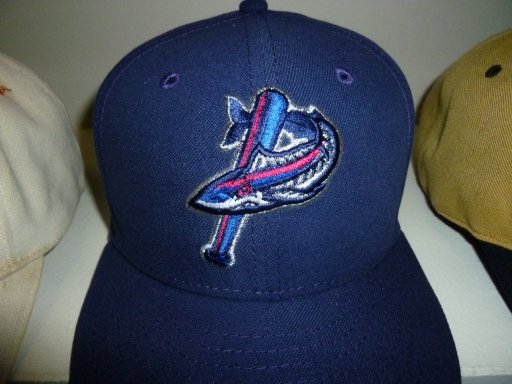 Whenever I get into these predicaments, I just think back to the time I wanted a ZZ Top keychain.  You remember those, right?  The big silver ZZ, featured in the old 80s videos? 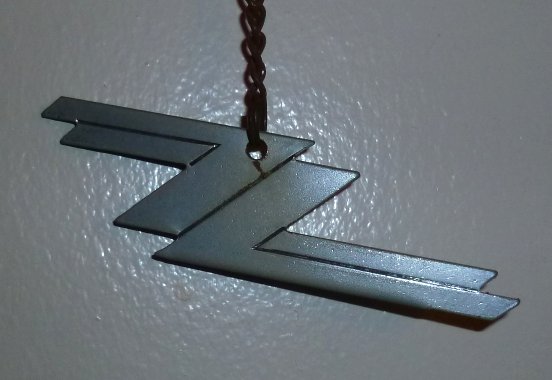 Mine could use a shine, but is still none the worse for wear.

The first time I saw ZZ Top in concert, I was going to buy a keychain, but they wanted something like $12.99 for them.  This was 1983 money, something I didn’t have very much of, so I passed.  Then I spent the next 3 years kicking myself for not buying the goddamned keychain.  Every time I saw one on TV, I’d be like, “Why didn’t you just buy the freakin’ key chain, you dipshit?”

(I cuss myself out all the time.  It saves everyone else the trouble.)

Then later, in the 90s, I got one for free at one of my record company trade shows.  Gave that one to my Dad, who still uses it to this day.

Wait, now where was I?  Oh yeah, I went to see a game on Sunday.  No, I didn’t wear my Blue Wahoos hat.  I already had good mojo with a different hat that I’ve worn the prior 2 times I went to a game this year, so I wasn’t going to break the streak.

Like usual, I started off here, in front of these bars. 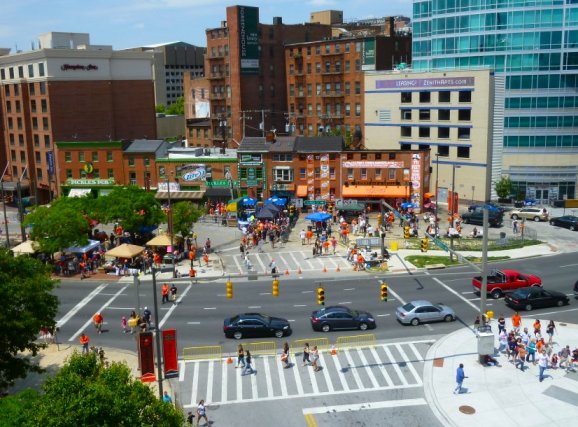 I get my eat on at the food stands on the left.  Then I get my (cheap) drink on at The Bullpen, which is the narrow bar that has the 3 tents directly in front of it.

Here’s why I get my food there: 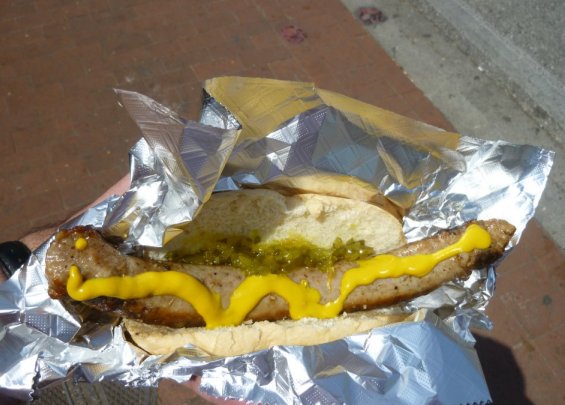 THIS should be The Big Wahoo.  This is $5 and would probably cost you $8 inside the park.

I missed batting practice this time, so I wandered up to the new patio.  I ordered my ticket online on Saturday, finding a single seat on the aisle, in the front row of the upper deck.  While I have my favorite areas to sit, I do like to try different vantage points.  Here’s where I sat this time. 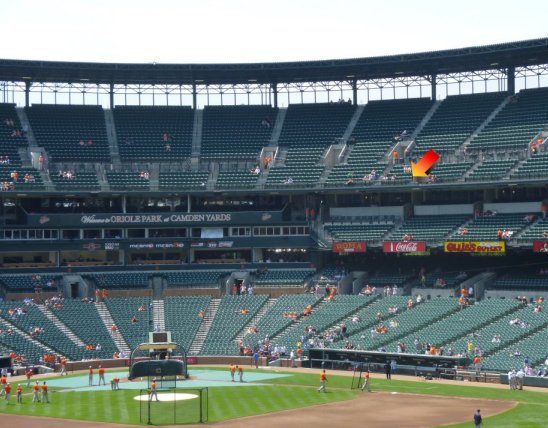 Front row, baby!  I could look right down the first base line.

As I navigated up to the upper deck, I shot this picture of the centerfield layout, that shows the places that I’ve talked about in previous posts. 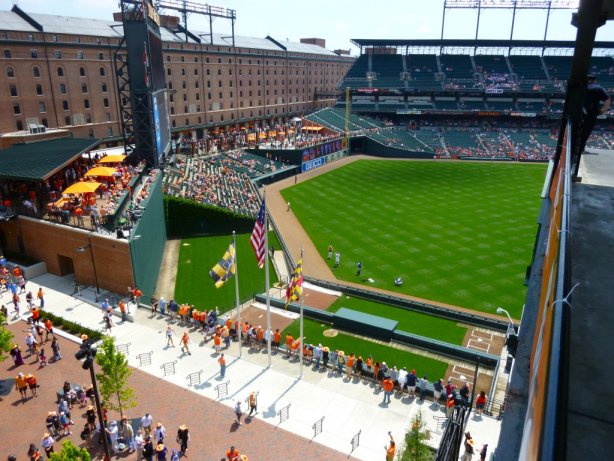 You can see the Statue Court at the lower left, the new Patio on the left, and the Flag Court directly in front of the Warehouse.

One cool thing they have on the upper concourse is a Tee-less T-ball cage.  They have an airjet hold a whiffleball aloft, where kids can come up and take a hack. 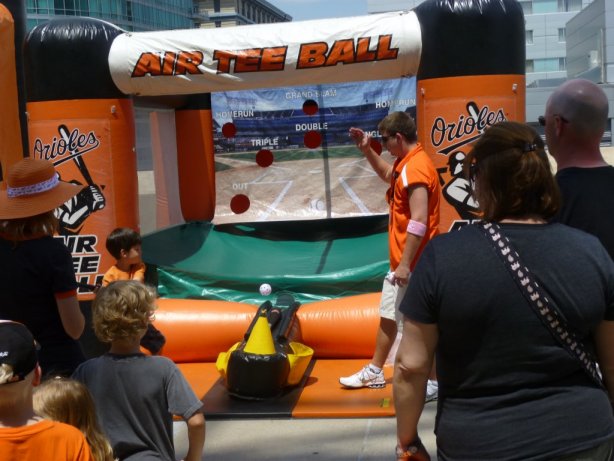 I totally wanted to elbow the kids out of the way and take a few cuts myself.  But with it being Mother’s Day and all, I chose not to cause a scene.

I was quite pleased with my seat, other than for one detail.  Seems they just put up these glass panels at the bottom of the stairways.  I guess they’re to keep people from tumbling off of the deck, I suppose, it they came down the steps with too much speed to stop.  But still, it hampered my view. 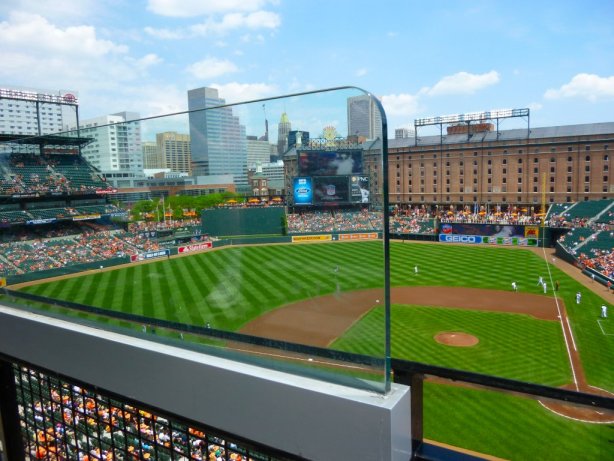 What’s a few falling bodies if I can get a better view?  They should accept the risk when they buy an upper deck ticket.

Baltimore does have a pretty decent view out of centerfield, as long as you’re sitting on the third base side. All anyone can see from the first base side is the Eyesore Hilton, at the far left of the gap.

Mother’s Day festivities were in full bloom.  They had the Oriole Bird and a “Mrs. Bird” come out to throw out a first pitch. 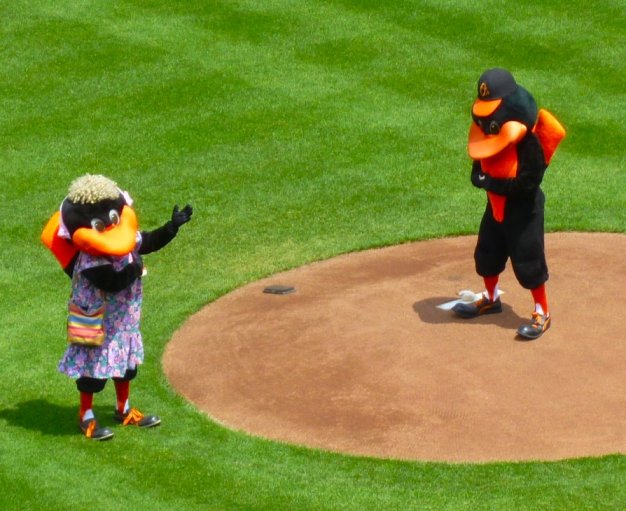 I didn't even know the Oriole Bird was one of a breeding pair.  Go figure.

Also, it was Sun Hat Day for all the women in attendance. 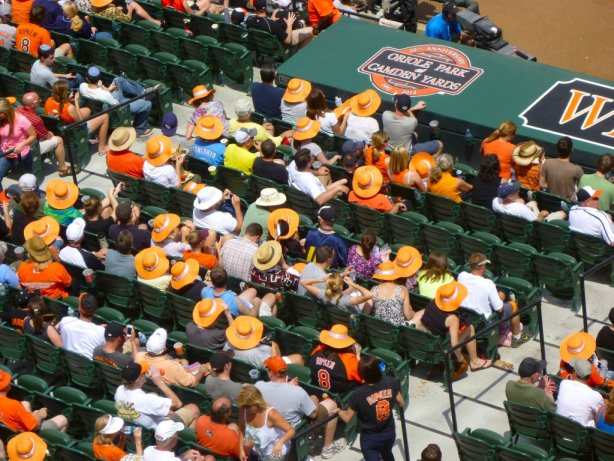 They all look like they're wearing flattened traffic cones.

It was a sunny day and I was starting to get really warm, but luckily the sun passed behind the stadium wall during the 5th inning, thus shading my seat.  It got a lot more comfortable then.  See this is why I like to go to the early-season games.  The weather is so much better.  Come July and August, shade or not, the humidity makes you sweat your buns off.

The game itself had its ups and downs.  Tampa Bay jumped out to a 7-1 lead by the 5th inning, but the O’s clawed their way back to trail 7-6.  Then in the 8th, the Rays hit back-to-back solo homers, to go up 9-6.  Still the Orioles fought back with runs in the 8th and 9th, before a final groundout with 2 runners on, ended the game.

I didn’t take a lot of “game” pictures… just during one at bat by Nick Markakis.  I wanted a lefty.  I’m just including a few here because they came out pretty well. (Considering I was in the upper freakin’ deck!) 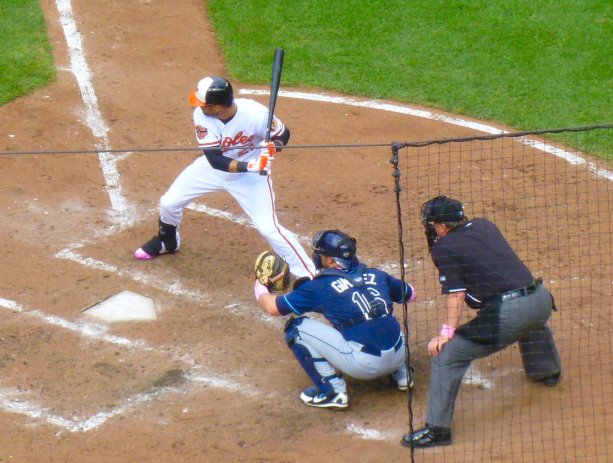 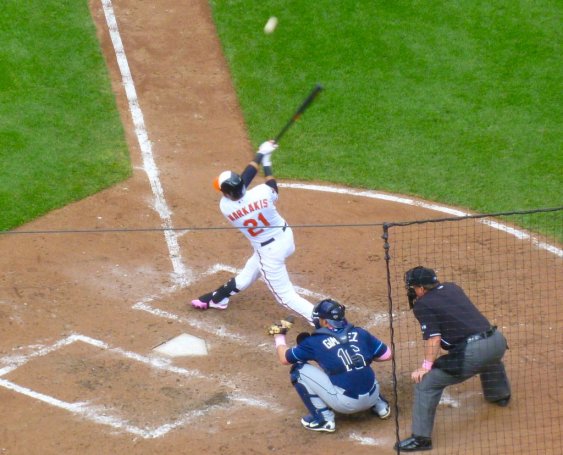 Markakis fouls one off. 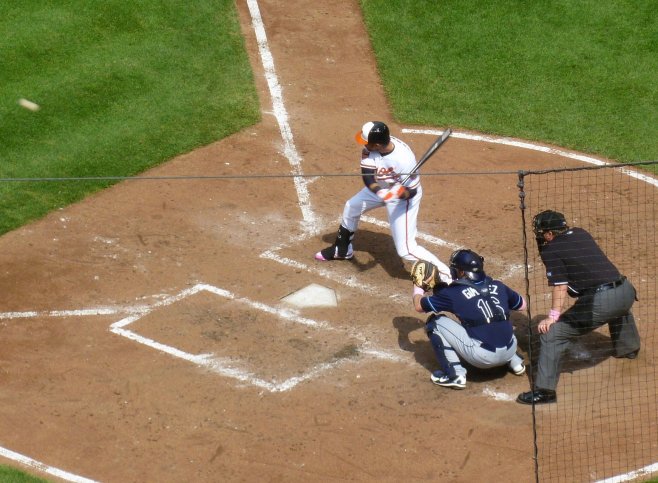 Markakis steps into a swing. 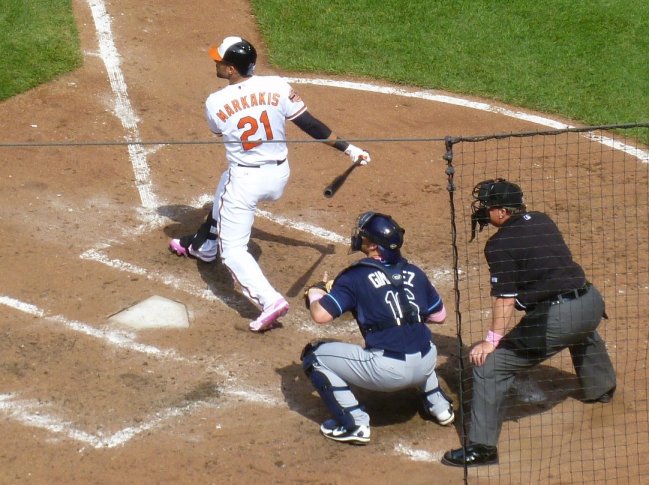 So that was that… another nice day at Camden Yards.  No Forrest Gump moments for me this time, not in the upper deck.  Thus endeth my streak.  But I feel sorry for people that don’t have a professional team in their town.  It’s such a benefit… well, as long as you don’t mind subsidizing the stadiums with your tax dollars… But I don’t mind.  If they didn’t spend the dough on stadiums, they’d probably just waste it.
Posted by bluzdude at 9:44 PM