I've only got a few more odds and ends left about my long, sordid career in retail, but none of them really fit together.  So I apologize in advance for the lack of clear direction with this post.  It will jump around a lot.

The Night People
One of the recurring events of in-store life was the annual physical inventory.  That’s where someone has to count every single item that’s for sale in the store.  It was a long, tedious and exacting job.

In my earlier retail years, we members of the store staff had to do it, and back then, the tech was pretty primitive… as in there was no tech.  We made tally-marks by price point.  It took a couple of years until we could use the fancy scanners that would scan the product bar code.

Once a big company bought our little record store chain, our physical inventories were farmed out to companies that specialize in the field.  We’d spend the week making sure everything was tagged properly, and doing pre-counts of the stock we had in boxes in the back room.  Then when once the store closed at the end of the day, The Night People would show up.

Well, that’s what I called them in my head.  Because these inventories were always done overnight, after closing, the Inventory Company had to have people with inverted schedules, so they slept in the day and worked all night.  I know factory workers (if there are any left in this country) have to do the same thing, but these were some pretty strange cats.

Shortly after closing, you’d see these pale faces begin to assemble outside the glass doors, waiting to be asked in like vampires; drawn to the light inside like so many moths.  We’d unlock the doors and they’d scurry in and begin setting up their scanners and form a triage, like in MASH.  The Alpha scanner would give them their instructions and direct each one to a particular area.

We on the staff worked with them, by remaining available for “price checks” when they’d come across an untagged piece of merchandise.  I don’t mean to badmouth an entire class of worker, but some of these people were a little “off” when it came to social skills.  All I’m saying is that there was probably a reason why they were drawn to this very solitary line of work.  I swear, one of those dudes slept with his scanning gun under his pillow.  I think I saw a carving on the scanner’s barrel, which said, “My Precious.”

I Was There
Over the 13 years I worked in record retail, I got to witness the gradual changing of the guard when it came to music media.  When I started at my first record store, they still sold 8-track tapes.  Sure, most of them were the “4 for a dollar” close-outs, but I remember seeing Michael Jackson’s “Thriller” on the shelf as an 8-track.

The cassettes were kept under glass in a long counter that ran the length of the store.  In order for a customer to look at one, they had to summon one of us to get it out for them.  As I mentioned in Loose Ends 2, cassettes became the dominant medium during the 80s and LPs began their slow fade to obscurity.  But the advent of CDs was the real bombshell.

I remember being there the day we received our first box of CDs.  It was a box from Warner/Elektra/Atlantic, with maybe 30 or 40 titles in it.  I clearly remember seeing the CDs for ZZ Top “Eliminator” and Dire Straits “Brothers in Arms.”  At the time, I didn't realize how drastically these shiny little discs would change the music industry.

As CDs took off, they made LPs superfluous almost overnight.  They were smaller, rarely skipped and sounded crystal clear.  By the end of the 80s, most of our mall stores had completely gotten rid of LPs… usually they were sent to the larger, freestanding stores for sell-through or return.

The new technology kicked off a 5-year period of immense growth in music sales, as people replaced their scratchy old vinyl with these slick new CDs.  For me, it was excruciating to have to wait for my favorite catalog albums to become available on CD.  Once I got my first CD player, I wanted all the CDs, right now!  But you can’t buy what they haven’t made yet, right?

These were the first 3 CDs I bought: 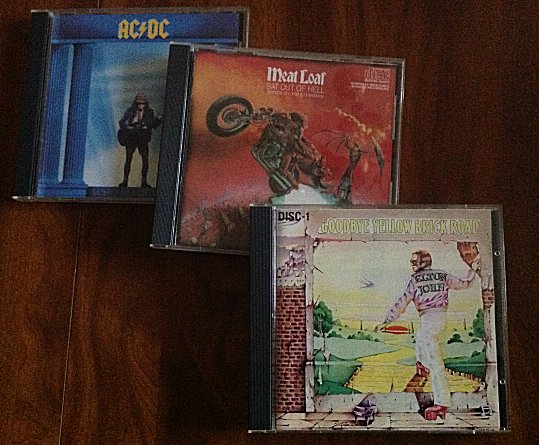 AC/DC’s “Who Made Who,” MeatLoaf’s “Bat Out of Hell,” and Elton John’s “Goodbye Yellowbrick Road.”  See, I’m so organized, I bought my first CDs in primary colors.

In the mid-90s, after most everyone had replaced their LPs with CDs, the industry tried to recapture the magic by introducing Digital Audio Tape (DAT) and Mini-discs (like CDs, only smaller).  Neither of them caught on.  In fact, I’d be impressed if you remember ever having seen one.  Unable to replicate the CD revolution, music sales were solely dependent on new artists and music catching on, so sales plateaued.  Flat profits caused much consternation in the executive offices, resulting in belt tightening and store closings throughout the industry.

After the way I was treated in this business, I laughed heartily as online sales and music downloads have made record stores functionally obsolete.  Instead of embracing these new technological concepts, the industry fought them tooth and nail before eventually trying to get into the game, waaaay too late.

In business, as it is in life, progress always wins out.

A Few Good Ones
Anyone that has worked retail for a while will have a steady supply of Awful Customer Stories.  I know I do, but I also had some great regular customers.  Sometimes people can really make your day.

When I was at the first place I managed, the mall store in Parma, I helped an older lady find something in particular for a grandchild.  Her name was Doris and she must have liked my service because she came back fairly regularly, whenever she needed another gift.  We got to kind of be friends and we’d yap for a little while, whenever she came in.

I don’t remember if I told her, or if someone else did, but she found out about my impending transfer to a store on other side of town.  One afternoon during my last week there, she came in with a goodbye present for me; a nice travel bag from Avon.  She said she wanted to thank me for all the help I’d given her.  Well, I was just floored.  As far as I was concerned, I was only doing my job.

I guess sometimes you forget the impact you make on people as you’re going about your day.  She sure impacted mine… I was quite touched.

Over at the Maple Heights store, I befriended an old, white-haired black guy, who always wore one of those Kangol hats.  He had also been friends with my predecessor, Kenny the Viking.  Again, I never did anything extraordinary; I just helped the guy and yapped with him from time to time.

I don’t remember the reason, but he brought me a present once too: a case of Coors.  I think he came by it accidentally… maybe a prize or something, but he didn't drink beer.  I certainly had enough manners not to insult this good man by refusing his gift, so I had the opportunity to toast him on 24 occasions over the next month few weeks week weekend.  A broke-ass retail manager does not turn down free beer.

Call Me Maybe
The only “obscene phone call” I ever got happened while I worked at that store.  I was sitting in my office and someone buzzed a call back… they’d asked for me.  When I answered, she said she “wanted to know how big it is.”

Now, with our practical joke environment being what it was, I wasn't sure how to answer.  So I said, “Here, let me whip it out for you,” then I put the phone down and dropped a massive product catalog on the desk.

Nah, I didn't really.  I was too shocked to be clever.  But I knew I didn't want to say something that could possibly be recorded and played back at every subsequent district party.  I forget what I said; I was trying to get her to keep talking, so that I might figure out who the hell she was.  Anyway, she hung up pretty quickly, which bummed me out.  She sounded cute and I was available that night.

Lesson Learned
One last quick item… When I was at the store in NY I was rehabbing, I began keeping a store journal in a small spiral notebook.  I’d write down my tasks for the week, how business was, what was going on with the staff and so forth.  I also began recording observations I was making regarding problems with various staff members.

If only I’d secured the book better.  (Or at all.)  Dumbass me left it in my desk drawer for one of my employees to find… one of the ones I was complaining about.  I know she saw it because of the nasty note she wrote back to me on a page about her.  She didn't stick around much longer.

I’m just lucky that all I wrote was stuff about how she seemed disinterested and resisted taking direction.  What if I’d written that she had a nice ass and a great rack?  Pretty sure my retail career would have been much shorter.

So, fledgling store managers; take my advice.  If you must record personal notes about your staff, keep that shit at home!  You never know who might go through your drawers.

You WOULD be available for her. You dirty, dirty man.

Well of course you know that about me... You've read about my sordid and steamy past before...

In this case, that call was probably the most exciting thing to happen to me that year. And man, did I ever scrutinize the young women that came in the store, wondering if she was That One...