In Loose Ends Part 1, I wrote about how our company’s loss prevention guy showed us how they could use a copier as a lie detecting machine.  They couldn't really; it was just a con that seemed to work on stupid people.  But I had my own experience with a real polygraph machine; in fact, I had it used on me by Cleveland’s Finest.  That experience will be today’s retail story.

It was during the time I was managing the Maple Heights store on the east side of Cleveland.  My store wasn't in the safest location, so we had some tools to deal with that.  First of all, we had this huge safe, like one you’d see in a jewel heist movie.  It stood about 6 feet tall and was as solid as a rock wall.  In fact, I’m pretty sure they used a crane to lower that safe into the store and then built the office walls around it.  And not only was it formidable, it was also alarmed.

Right by the office door, there was a toggle switch that activated the safe alarm.  If you wanted to get into the safe, you had to flip the switch; otherwise it triggered a silent alarm straight to the cops.  Lord knows how many times I’d forget about the alarm and open the safe to prepare the morning drawers.  Then when I’d walk out to the floor, there would be a couple of cops in the foyer, with their hands on their guns.  (Oops.)

That was one service the cops provided; another was a bank drop service.  See, part of secure cash management was making sure there was as little cash on hand as possible, to provide disincentive to any prospective robber and reduces losses if you ARE robbed.  Most of the time, that meant taking cash drops from the register and moving it to the safe.  After closing, we’d put the day’s deposits into a lockable bank bag and put it our bank’s night drop.

But during the holiday season, we would be seriously rolling in cash, so much so that it could be pretty risky just transporting that much dough to the bank, especially at night.  Enter: the police department.  Our strip center had a deal with the local precinct, which allowed uniformed off-duty cops to pick up our deposits and take them to the bank drop for us.  During weekends or busy holiday times, we would call them up and our hard-earned money would receive an armed escort to the bank.  In the morning, a manager would go to the bank, get our coin rolls for the day and pick up the deposit slips.  It was a simple and effective routine, right up until one of our deposits went missing.

It was during the holiday season and early in the evening, I prepared a couple of deposit bags.  (I believe we’d make separate deposits for each register.)  The cop came and took them away, which made our end-of-day deposits much lighter.

But the next morning when I went in to get our bags and deposit slips back, there was a slip missing.  I had the teller scour the area, but they had no record of any other deposit.  When I got back to the store, I matched the slips to our records and easily determined the missing deposit was one of those we gave the cops.

I had personally prepared the deposits and recorded all of our data and my assistant and I brought the night deposits to the bank, so I knew that those were squared away.   The problem was; have you ever tried to intimate that a cop was at fault for something?  Suffice to say, it gets really ugly.

As far as the cops were concerned, our records were meaningless, and to an extent, they had a point.  If I had been a crook, I could have falsified it all up.  They didn't know me though; that I’d already seen how embezzling cash from a store is a no-win situation.  That’s how I got my first store… remember the Legend of the Felonious Lesbian?  No way would I go there.  So if it wasn't me, and it wasn't my assistant who was with me, who’s left?

I spoke with the cop that picked up our deposit.  He was an older, white-haired guy and he told me that there was no way he was risking his reputation and pension and everything, for a bag of money.  He said he retraced his steps, double-checked all over his car and checked with other banks along his route, in case they found a strange deposit.  Nothing turned up.  The thing is, I believed him.  I don’t think he did anything dishonest or crooked.  But that doesn't mean he couldn't have made a mistake somewhere along the line.  The money had to go somewhere, and I knew for a fact that we handed him that deposit.

So we filed reports and got our Loss Prevention guys involved, but it still came down to my veracity and that of my assistant, and the cop.  That’s where the lie detector came in.  All three of us had to take a polygraph.  Much like the way I approached jury duty, I thought it would be kind of cool to experience.  Unlike with jury duty, I was incorrect.

The setup itself was pretty simple… primitive even, by today’s tech.  I sat beside the machine with the wiggly pens and moving paper, and they attached a blood pressure cuff, put some clippie things on my fingers and looped a ridged, hollow tube around my chest. 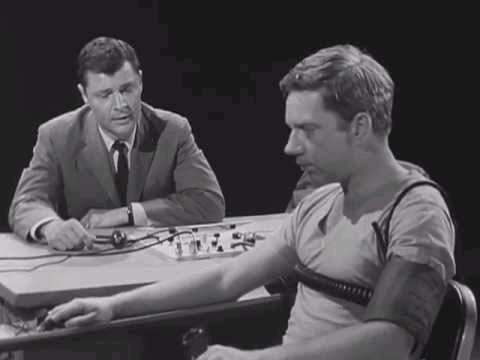 The setup looked a lot like this, except we weren't in black and white.  Well, maybe the cop was… (snicker…)

After establishing my “baseline,” with routine questions about my name, age, address and stuff, the shit got real.  Obviously, they asked me if I took the money or knew who did, and I said no.  But the way they did it was pretty aggressive.  They weren't just asking me, they were telling me they knew I did it.  It was pissing me off, because I knew I didn't.  They told me the machine said I was lying.

After a few minutes of such torment, they left me alone to “think about my story,” for a few minutes, and “decide how I wanted to play this.”  When they came back, I was like, “ I've decided… I still didn't take the money.  We handed it to the cop and that’s the last we saw it.”

And with that, they said I was free to go.  Lying bastards… It was all a big act, really.  I figured that must be part of the strategy; to get the person all riled up and flustered.  But because I knew what I had and hadn't done, they were about as convincing as the old copy machine test. 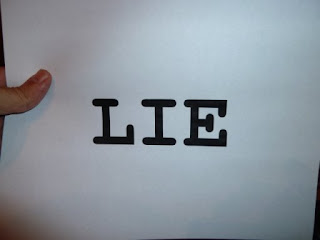 I wish I could have been there when they tested my assistant, who we called “Big Jon.”  He was huge… I’m 6’3” but standing beside him made me look like Michael Cera on a heroin jag.  Luckily for everyone involved, Big Jon was a mild-mannered, church-going sort.  Still, it would have been something to see him get riled.  They hadn't invented tasers yet, so they probably would have had to go nightstick on him.

We compared notes after the ordeal, and he said they pulled the same stuff with.  He was pretty angry about it, but he kept his cool.  But he was very UNcool with being called a liar.  Much like all of us, I guess.

Ultimately, all three of us passed our polygraphs, so we ended up right back where we started… what happened to the money?  We never did get to the bottom of it.  Our LP guys couldn't find anything to show we were at fault, so the loss was never held against us.

If I had to guess, I’d say the cop dropped the bag on the way in or out of his car.  We gave him several of the nylon bags, so it wasn't hard to imagine one slipping out without making any significant noise.  And in that neighborhood, if anyone walked by and found a deposit bag on the ground, there was zero chance it was going to get turned in.  I think the bulk of that cash ended up in the till of a local liquor store.

Based on this experience, we devised a new procedure, in which whenever we had the cops pick up a deposit, we also had them sign for it.  Going forward, we’d be able to track each bag to the guy who picked it up, thus eliminating any questions about the chain of custody.  I don’t know why it hadn't been done all along.  The whole system was set up before I ever took over the store, so I just ran with it as it was.  Live and learn…

And You Thought I Was Italian…
To end on a funnier note, let me tell you this quick story.

I've always hated wearing name tags.  I found it unsettling when complete strangers would walk up and address me by name.  My first reaction was always to wonder where they knew me from and why I didn't remember them… But one time it led to one of my favorite spur-of-the-moment comebacks.

My badge had my name and title… it said “Bluz   Mgr.” I always was one for economy of words…until I started writing a blog, anyway.

One day this dude came up to me and just to be a wiseass, he says, “Mgr…That’s a funny name.”

I instantly deadpanned, “What’s wrong with it?  I’m Hungarian”

Dude fell all over himself apologizing, until I laughed in his face.  I probably should have let him believe he just insulted my heritage…

In retrospect, I should have said I was Czechoslovakian.  “Mgr” is closer to… 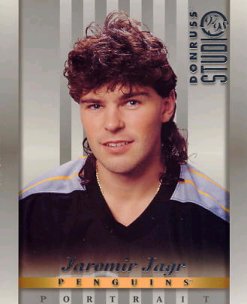 …than it is to 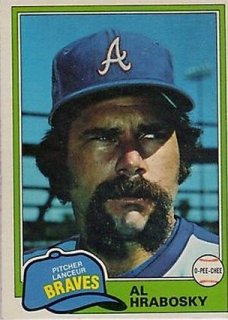 But because at the time, the Penguins were still a couple years away from drafting Jagr, I can be forgiven for mixing up my Eastern European surnames.
Posted by bluzdude at 6:46 PM