It took me 2 months and 13 posts, but I finally got my story out… about my long, twisted, gnarled life in the retail trenches.  If you’ll recall the original chapter, it started with my having yet another dream that I was back to toiling away at one of my old stores.  I know that by the end of the saga, I no longer had much of an audience (as evidenced by the evaporation of comments) but it was something that I felt I needed to write, if for nothing but to purge the material from my being.

It’s funny though, because I really thought it wouldn't take more than 2 or 3 posts.  And all I really wanted to write about was that last place; the video rental store.  That’s where the prior 12 years of experience came together, for me to go in like a mad scientist and put everything back together within a month.  But just like with any good book, in order for the end to have full impact, you have to set it up, don’t you?  OK, so I had a lot of setup.

You would think that after devoting that many pages to a single topic, I’d have run it dry. Not so.  I still have some random stories from my retail time that I couldn't work into the narrative without making the posts ungodly long.  So these will just be some random stories and tidbits from the various places in my retail history.  Yeah, it will probably take a couple of posts.

Rabbit
When I first started in that original record store, I was introduced to the “Rabbit” game.  It was something my boss always did.  It’s very simple; at the first of the month, you have to say (or otherwise indicate) the word “Rabbit” to people before they can say it to you.  If you do so, you have thus “Rabbitted” that person and you may lord it over him for the rest of the month.

Our store took it pretty seriously, so the first of every month could be pretty crazy.  It wasn't unusual to see people sneaking in the front door and tiptoeing into the back office for a sneak Rabbit Attack.

Once my manager broke out to become a DM, he brought the game to all of the other stores across his district.  Then we had to become much cleverer to Rabbit each other, because the players didn't necessarily work in the same place.  Typically, we’d try to surprise each other on the phone.  (There was no caller ID yet.)  I was somewhat insulated because I rarely answered the phone if anyone else was on duty, but I had to put a stern warning to my staff… anyone handing me the phone under false pretenses (like another store manager put him up to it) would receive severe repercussions.

It got really interesting once I got to the home office.  At that point, my old DM had territory in Florida and across the southeast, and he got his people there playing it too.  So I was always at risk from the Rabbit phone call.  But it wasn't limited to phone calls.  You could Rabbit people by any means necessary.  The rule was, in order to count as a Rabbitting, you had to know you were Rabbitted.  In other words, common sense.

I had one crazy manager send me a Bugs Bunny Pez dispenser through the inbound company mail. 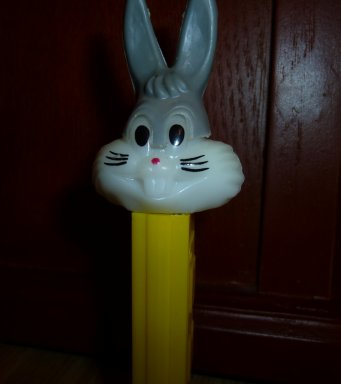 Another time, she sent a photo of an Easter display from a grocery store, which featured inflatable bunnies hanging in a line across the ceiling.  I would send her similar things, because I had access to our mailroom, which put together weekly packages for every store in the company.  It was no big deal to slip a little something extra in there.  I just had to be mindful of the timing.

While I was at the home office, I conceived of and nearly executed the greatest Rabbitting of all time.  Here’s the deal…

Our company wanted to create an anti-theft training video to send to the stores, and they recruited volunteers from the office to play in it.  Because I was: A) marginally trained in film-making, B) a seasoned in-store professional, and C) a ham-bone, I eagerly volunteered and was assigned the role of Good Store Manager.  (I played the “What To Do” part, as opposed to another who played “What Not To Do.”)

We assembled at one of our mall locations after it closed and filmed until the wee hours of the morning.  There was a scene about how to look for merchandise stored up at the register.  Sometimes it’s for a customer, other times, an employee might be setting it up to take later.  So I was supposed to start pulling various goods out from under the register.

Now, I knew that this video was going to be premiered at our semi-annual company meeting that spring and my old DM (as well as many other Rabbit-playing guests) would be there.  So I arranged it so that one of the things I pulled out was a big stuffed rabbit.  When it was time for the shot, I pulled the bunny out with a flourish, and eyed the camera knowingly.  Gotcha!  Every Rabbit player in attendance would simultaneously realize that I’d just nailed them.  It was brilliant!

Well, it would have been brilliant if that particular shot hadn't  unbeknownst to me, ended up on the cutting room floor.  I had been so excited that morning.  I spent the first hour of the meetings ducking my old DM, so he couldn't Rabbit me first.  And then, after all the anticipation… nothing.  I was so bummed.  I felt like all those cartoon villains, after Scooby-Doo and those meddling kids ruined everything.

Loss Leaders
I loved working with our Loss Prevention guys.  They always had such good stories, from the schemes they uncovered, to the methods they used to get over on people.  I remember when our Toledo store was first bought by the big company, the LP guy they sent out was a riot.  He told us a story about how he got a guy’s confession for stealing, by telling him that a copy machine could be used as a lie detector.

We howled, and naturally asked for a demonstration.  He said we could use the copier right in our office.  He pulled a couple lengths of speaker wire and attached them to the dials on the copier.  Then he had my buddy Kenny the Viking be the guinea pig hold the other end of the wires.

He said, “OK, Ken, I’ll ask you an obvious question that we all know the answer to. Then I’ll push the button and the machine will tell me if you’re lying.  Kenny, have you ever fucked a goat?”

Ken laughed and said, “Of course not.”

LP Guy pressed the button and the copier kicked into motion, spitting out a single sheet of paper, which of course, said, He got up, waving the paper in Ken’s face, yelling, “Jesus Christ, Kenny, you’re a liar!  You’re lying to me right now!  Why are you fucking goats?”

All Ken could do was sputter while we laughed our fool head off.  Obviously, the LP Guy had a sheet of paper in the copier that said, “LIE,” which he pulled out to show us.  To me, it wasn't just that he was giving my buddy the business, but that anyone would fall for such a stupid stunt.

LP Guy assured us that it worked often enough to keep using it.  He also pointed out that his suspects weren't usually the brightest crayons in the box, to start with.  He often had the proof already, but everything went a lot easier when the suspect confessed.

There was a time, when I was in the Maple Heights store, when I shared my office with the local LP officer.  He showed me a number of his currency “trophies.”  Some of them were really quite clever.

My favorite scam was a simple one-dollar bill, but on each corner, (where it says “1”) someone had glued the corner of a twenty-dollar bill.  The trick was that you took one corner each off of four different $20 bills, (so that they remained usable) and put the “20” corners over the “1” corners.  Then you slip the altered bill in among a couple of good twenties and when fanned out, most cashiers would only see the corners and accept the “one” as a “twenty.”

They've since redesigned the twenty-dollar bill to vary the size of the corner numbers, among other things.  But with the lack of attention from our nation’s cashiers, the scam would probably still work.

Loss Prevention also hired a former record “booster” (professional record thief) to come around and school us on how he and he cohorts used to steal large quantities of goods.  They had a whole bag of tricks, from custom pockets sewn into their coats, to foil-lined baby strollers.  (The foil blocked the radio waves from the security stickers.)  The booster told us about their strategies, like how one guy would distract the staff, while the other one would “gather” the targeted titles into one place, before making the grab and concealing the merchandise.

He also told us that these guys would never put up a fight, but they’d do anything to get out of the store.  They didn't want to sacrifice all the goods from other stores that they’d already loaded into their car.

I swear, with all the knowledge I gained from Loss Prevention and the ex-booster, I could have supplemented my meager retail earnings by turning to a life of crime.  But it sounded like a lot of work and I just didn't have the time.

Next up: Bluz becomes a One-Man Media Department.  For a brief period, I was actually using my degree in Radio/TV/Film.  Somehow, fame eluded me.
Posted by bluzdude at 7:18 PM