As I’m sure you know by now, the worst has happened.  The Ratbirds won the Super Bowl.  It’s appropriate that it happened the day after Groundhog Day, because now I have to look forward to six more weeks of gloating.  The terrorists have won.

I came in to work yesterday going full-on Johnny Cash; I was the Man in Black… black tee shirt, dress shirt, slacks, shoes, coat, hat and soul.  When I ducked into my boss’s office to grumble, she said, “You mean you’re not happy for us?”

I just gestured toward my outfit and said, “I was going to wear the full black veil, but I thought it might be a bit much.”

On my walk past the hotel I pass every day, the Bellman stood out in front of me. He’s seen me walk by him a couple hundred times in a Steelers hat, so he said, “I want to see what hat you have on today…”

I just kept moving and said, “It’s hockey season now, baby.”  He should have been paying better attention… I’ve been wearing Pens hats ever since January.

Now today, to show I’m slowly moving on, I’m wearing a black and gray checked shirt with gray pants.  Tomorrow, I should be back to my usual living color.

They had the parade this afternoon, marching down to the Inner Harbor and then over to the stadium.  Pinky had been making noises about wanting to come down to see it.  She wanted to know if I might want to go with her.

Seriously, sometimes it’s like she doesn’t even know me.  Sorry, while I’d be happy to take her out to lunch afterward, she’d be on her own for this one.  I couldn’t think of anywhere I’d less like to be than standing out in the cold, surrounded by a hundred thousand Ratbird fans, watching them celebrate.

She decided this morning not to go, (which I knew she would), so I was off the hook.  I mean, I totally wasn’t going to go, but now I don’t have to hear about it the next time she gets pissed at me.

At least the Baltimore economy is getting a little boost.  Unlicensed merch sales must be through the roof by now.  I saw a guy this morning selling $10 Championship tee shirts outside the subway entrance.  Nice hustle.  I’m in the market for a nice Ravens doormat.  That way, I can wipe my feet on it every night.

A couple of people have asked me why I hate the Ratbirds so much.  I suppose I take it for granted that you already know.  But to be fair, I wrote about it some time ago and I’ve picked up a couple of new readers since then.

I first documented my Rattie antipathy in 2009, by reposting something I’d actually written a few years before that.  Like I always tell people, my hostility is not arbitrary; I have numerous very specific and personal reasons.  “Purple Stain” covers every reason I can’t stand the Ratbirds, from their history in Cleveland, to punk players, a doofus owner, bush league stadium tactics, idiot fans, and a general refusal to accept responsibility for any shortcomings, on the field or off.

Then there was the time I was physically assaulted in their stadium; cheap-shotted by some sore loser.  And I certainly wasn’t the first.  I did a post where I told my story, plus those of some other people that had written to the Baltimore Sun, to tell of the abuse they faced in that giant purple toilet.

Listening to the local media this week almost made me hurl.  It was funny because before the game was even over, I could see the Rattie fans and local media lining up their excuses, namely the blackout that delayed the game by a half hour.  Right now, they claim it would have been a blowout, if it wasn’t for that delay.

They keep citing “momentum” as if that’s some kind of measurable resource, and that San Francisco had the chance to “regroup.”  They ignore that they just came out of halftime.  Any “regrouping” the Niners did came during the elongated halftime show.  But no one wants to hear that.

Also, it’s laughable how the fans and sportscasters are falling all over themselves to discount what should have been an Illegal Contact call during the Niners’ last possession.  The company line is that A) the receiver initiated contact and B) for some reason, the refs aren’t supposed to call penalties at the end of the Super Bowl.  (???)  And I’m not even talking about the fan base… I heard the local sportscasters saying that this morning… the guys that are supposed to know better.

All I can tell you is that if the situation was reversed, and the Ravens were attempting a game-winning drive and were thwarted by uncalled illegal contact, they’d be screaming bloody murder.

“It’s a fix!  The league doesn’t want us to win!  Goodell told the refs not to make the calls!  We were robbed!  We’re the rightful champions!  No one beat us but the refs!”

And on and on.  You think I’m kidding, but that’s a stone cold fact.  That was exactly the local angle every time the Rats lost to the Steelers in the playoffs.

Anyway, I’m trying to see things in a positive light.  Joe Flacco, their quarterback who was named Super Bowl MVP, is a free agent this year.  The dude is going to get paid.  And when you load up $100 million on one guy, you have so much less to spend on the rest of the team.  So I’m thinking that they are going to have to let some of their guys walk.  They can’t re-sign everybody.  Such is the downside of winning it all.  It’s a bitch to repeat.

Best of all, I never have to watch Ray Lewis play again. 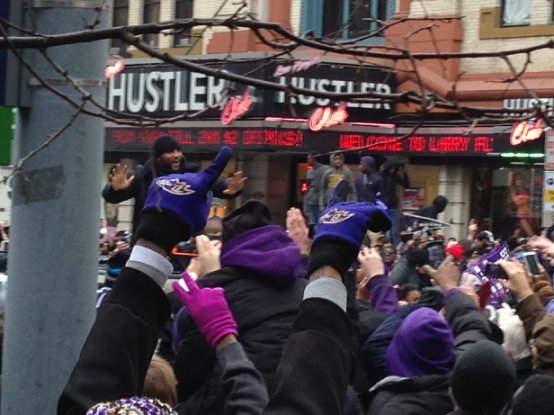 Ray Lewis, under a sign that says it all.

Sigh.  So I just tell people, “Win four more, and THEN we can talk.” 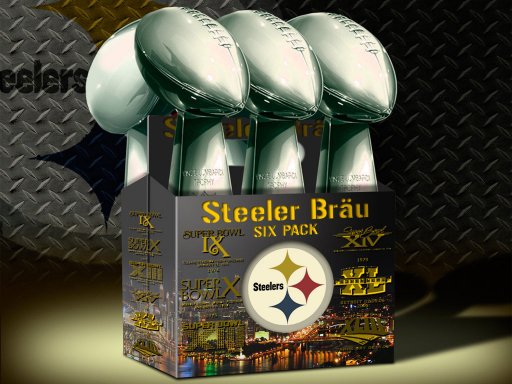 In the meantime, it’s hockey season!  My Penguins are in 1st place in their division and within a point of 1st place overall.

Everyone else around here can go puck themselves.
Posted by bluzdude at 6:23 PM