Hey Mitch! What Day Is It?

It might have been better if I’d have written this last week, (as far as timeliness goes), but I heard over the weekend that various Republicans are pushing the idea that they are now being “humiliated” by the Democrats, over the Obamacare/Debt Ceiling/Government Shutdown mess.

Honest to God; I heard John McCain say so himself on the Sunday morning talking head shows.  I just had to laugh.  Aww, the poor fellas… getting picked on just because they took an ICBM to a procedural debate. 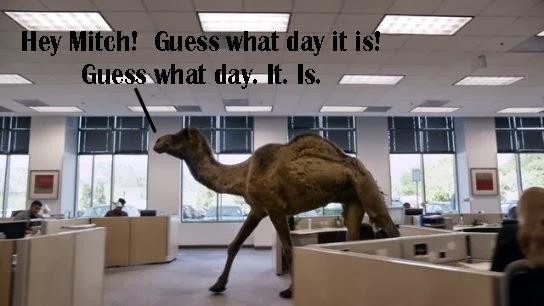 “It’s day 18 of the Shutdown and everyone thinks it’s Your Fault!  Ha Ha HAH!”

Is it me, or does Harry Reid (left) look like a somewhat less constipated version of Mitch McConnell? 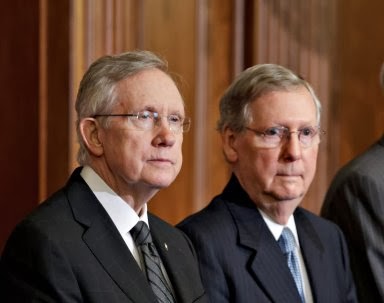 I can’t believe that this crap is still going on.  I’m seeing now that the (non-whack-a-loon) Republicans seem to have given up on back-dooring the ACA, and are trying to extract some kind of concession on entitlement reform and debt reduction.

That they’re still trying to bargain tells me that they still don’t fully understand the situation into which they’ve gotten themselves.  They essentially have nothing to offer other than not tanking the foreign and domestic economies.  They now expect the Democrats to give them something just so they can “save face.”

I hope the President and Senate Democrats don’t yield a stinking inch, because even if the terms have changed, it’s still extortion.  “Give us what we want or we’ll blow this whole thing up!”  It’s what terrorists do, when they can’t convince anyone of their position through rational discussion.

And what do we never do with terrorists?  Negotiate, because if we make their actions profitable in any way, they will only terrorize again.  The GOP staked out this radical-right position, so in my book, they have to take the consequences.

Granted, the House GOP is in far better position than their counterparts in the Senate.  Senators have to win the entire state, where Representatives are likely to benefit from a district that’s been tightly gerrymandered to their own political direction.  The only way to dislodge these Representatives is for the Democrats to start winning more governorships, so that in 2020, they can redraw the districts to their own benefit.

I fully admit that it’s easy for me to take a hard line on the government shutdown, because thus far, I haven’t been touched by it.  I still get up, go to work and get paid, come home, play on the internet and watch TV.  So far, the shutdown has taken no skin off MY ass.

You know, I bet if they found a way to include network and cable TV in the government shutdown, you’d see some real political action.  Once people don’t have anything better to do, you’ll see a lot better attendance at the rallies.

But I hope that come the 2014 elections, everyone remembers what really happened over the last few weeks.  We have to remember this stuff clearly, for when these GOP clowns start blaming all the pain and loss from this shutdown, on the Democrats.  They count on the fact that we have the collective memory of a goldfish.  ("Hey!  A castle!  And there’s another one!")

They’re going to have to go to those local Seniors Centers and explain, “I know we caused the economy to bottom out and gut your 401k funds, but we only did it because we don’t want anyone to get a better deal on health insurance.” 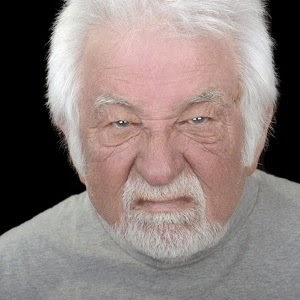 I have a feeling that position is going to be less popular than when they took Matlock off the air.
Posted by bluzdude at 8:16 PM

I didn't even realize the government was closed for a while.... That's how irrelevant they are! Lol!

Well, you were just in Germany, and I bet the Germans had their government working... and with tightly honed precision and skill, I bet.

I feel bad because this also has not affected me (I am sure my 401k and 403b will have rebounded by then, although I am sure there will be two or three more shutdowns before I retire). And I also feel bad that I have been tuning so much of it out.

I am just so sick of it all. Part of me wants to say that no one in congress should be/have gotten paid, but that is not fair to everyone. But it really is a big part of me that feels that way.

Oh, and I cannot explain why that camel commercial never gets old for me. :-)

Yes, the way they worked this re-start, we're due to go through the same damned thing against in January. It's not like there is going to be any essential change in the dynamics.

Wait . . . they canceled Matlock!! Why are you just now telling me this???

That commercial has become the Budwieser Frogs or "Whuzzzz Uppppp?" of the moment. It is pretty funny, though. They tried a bunch of different concepts, before they hit on this winner. If at first you don't succeed . . .

Yeah, this one really has "legs," doesn't it? You can tell it's a hit by the number of people that go around imitating the camel. Almost makes up for those idiotic "Caveman" commercials.

Please repost this as a refresher just before the elections so we can all reflect on how awful it can get in Washington.

Will do, Betty. I'll make it my business to remind everyone what happened here and who caused it. Because we all know what kind of attention span and topical memory the American Public has. (short and none.) Guaranteed that by next October, the GOP and Fox News will be talking about the great Democratic Shutdown of 2013, as if it had been agreed upon all along.