With Halloween right around the corner (and down the block), I saw a thing on Entertainment Weekly about the 20 Greatest Horror Movies.  I had a look and just for fun, I’ll give you my impressions.  Well, not like actual impressions… I’m not gonna act out the shower scene from Psycho, or anything.  And speaking of spoilers, there will be some.  But I figure you've either already seen these movies, or you never will.

They started with the best and worked down, so I will too.

1. The Shining.  I think it’s “OK,” but hardly worthy of the #1 spot.  Best part was watching Jack Nic slowly go mad, climaxing with a look at his days and weeks’ worth of work on his novel.  It’s chilling when it’s shown to be nothing but “All work and no play makes Jack a dull boy,” over and over again, filling reams worth of paper.  After that, it was essentially just another ‘bad guy chases people with an ax” movie.

2. The Exorcist.  I never saw this in the theater; when I was in junior high, a friend did and told me about it.  I said, “No fuckin’ way I’ll ever see that.”  Many years later, I read the book, which paved the way for finally seeing the movie.

I think this should have been #1.  It’s one of the creepiest movies ever.  The visual effects were “meh;” nothing an amateur couldn't figure out.  To me, it was that sound!  The demon voice coming from the little girl is what always gets me.

3. Texas Chainsaw Massacre.  I saw this one in college and I didn't care much for it.  It was the precursor of the modern torture-porn movies like “Saw.”  Just gore for gore’s sake.  No thanks.

4. Silence of the Lambs.  It’s one of my favorite movies ever, but I don’t think it belongs on this list.  It’s not really a horror movie… it’s more like an intriguing and occasionally violent murder mystery, with a fascinating villain.  (Hannibal Lecter, not “Buffalo Bill.”)
5. Jaws.  I've written extensively about this one before.  Suffice to say, it gave birth to the Summer Blockbuster, and scared the shit out of beach-goers for years to come.

7. Halloween.  This one is to slasher movies what Jaws was to monster movies.  It’s more about suspense and a sense of doom, than hardcore violence.  Halloween kicked off the modern age of slasher flicks.  I fell in love with Jamie Lee Curtis from the trailer alone.  Pretty babysitter stalked by menacing, indestructible killer, tries to save herself and the kids, accompanied by the best horror film score ever.  One time in the 80s, I was driving in the car and the Halloween theme came over the radio, and I almost went off the road.  It made me check the back seat, I’ll tell you that.

8. Psycho.  This is the first one on the list I haven’t seen, probably because by the time I might have been interested, the plot twists were common knowledge.  Sure scared the shit out of my mom, though.

9. Seven.  This is the only movie that ever affected me once the lights came up.  Usually when they kill the bad guy in a horror movie, there’s a degree of relief and satisfaction.  Not here.

I saw this with Future Ex at a mall theater complex.  At the end, we sat there all the way through the credits, until the lights came up, just stunned.  Finally, she looked at me and said, “I need a drink.”  I said, “Oh hell yes,” and we went directly to a bar in the mall.  I said to the bartender, quoting Sipowicz, from a recent NYPD Blue episode, “Whiskey.  Line’em up.”

It was that upsetting of a movie… A great horror flick, but one I won’t see again.

10. Rosemary’s Baby.  I never saw this one either.

11. Poltergeist.  Now we’re talking!  Release almost in tandem with ET, it was a tour through Steven Spielberg’s childhood terrors.  Groundbreaking SFX (for the time) highlighted a classic Family Lives in Haunted House story.

Damn you, Spielberg, for that clown.  That fucking clown… 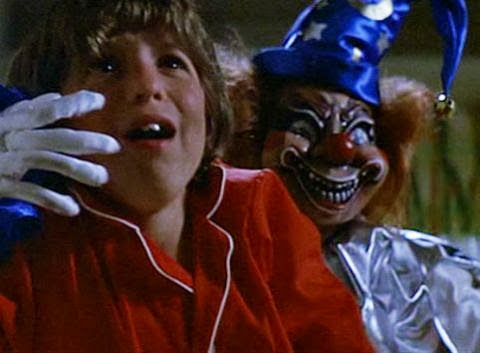 12. 28 Days Later.  Groundbreaking zombie movie that introduced the nation to the “fast zombie.”  That’s what scared me… the mindless abandon with which these things ran; like rage personified.

13. Nightmare on Elm Street.  Freddie Kruger aside, I loved the idea of being afraid to go to sleep, lest you get killed in your dreams, and therefore in real life.  It was a simple idea that spawned a dozen (crappy) sequels.

14. The Thing (1982).  I've written about this one too… it’s another all-time favorite.  Dazzling (non-CGI) SFX highlight this creepy, paranoid, icy thriller.
15. The Evil Dead.  Never saw this one.

16. Carrie.  I’m not sure I’d add this one.  Aside from the big ending, it’s not really much of a horror movie… just a very sad tale about a sweet but unhappy girl and her religious-nut mother.  Even that last legendary grave-side shocker came off to me as nothing more than another variation of a cat jumping out of a corner.

17. Night of the Living Dead.  I saw this one ages ago, and was underwhelmed.  But it literally defined the conventions of the traditional zombie movie.  Props for filming it in and around Pittsburgh though.

18. The Omen.  The last of the Nixon-Ford era trifecta: Rosemary’s Baby, The Exorcist, and The Omen.  The Omen has that same satanic dread that the other two do.  I mostly remember a creepy kid, pretty Lee Remick falling over a railing, and some dude getting decapitated by a falling pane of glass.

19. An American Werewolf in London.  One of my favorite movies ever, in fact I wrote a whole post about it.  Dark humor and brilliant (non-CGI) SFX highlight this off-beat werewolf tale.  If you've never seen it, please do so immediately!

20. Henry-Portrait of a Serial Killer.  Never saw this one either.  Struck me as just some dude stalking people and slicing them up.  I need a little more than that going on.

Now, with all that said, I present my sequence of their top 20.  I’m cutting the 4 movies I didn't see, plus The Ring, which I just don’t think is that good, and adding some that should have been included.

OK, what am I missing?  And what am I overrating?
Posted by bluzdude at 7:39 PM

I am not big on horror/scary movies. Having said that, I've seen over half of those listed, and the rest are pretty much so pervasively talked about and common in society, that I feel like I've seen them! (Exorcist, Aliens, Night of the Living Dead, etc). So really, I'm not your best judge of what's missing. Now, Thoughtsy . . . there's your girl.

I would add IT, though. That damn clown. Why are clowns so freaking scary? Oh yeah, THESE movies!!

Any nightly news, The FRIGHTLY NEWS, gets my vote. Truth scares me to pieces now. One more pic of Michelle Bachman will turn my brown hair blue.

I almost did add "It," but I didn't because technically, it wasn't a movie... it was a 2-night TV mini-series. I've hated clowns ever since I was a little boy, and used to have nightmares about tiny bowling-pin sized clowns that were coming to get me.

You gotta see Evil Dead!!! It's one of my favs!

I'll take your recommendation under advisement. I have a co-worker that told me the same thing... a woman in her 60s!

Maybe it will be on cable between now and Halloween.

What about Army of Darkness? I mean, it's Bruce Campbell. Actually if you get a chance to see Evil Dead The Musical on stage, do it. Sit up front in the "Splash Zone."

I agree with you. I'm not sure if I'd classify some of these as horror.

I love that you added Cabin in the Woods. I liked that movie although I was a little disappointed in the end.

First, thank you for coming to visit, after I so shamelessly beckoned.

Notice that most of the ones I’ve seen are “old.” I saw them when I was young and in my prime “Horror Movie Watching” era. Also, once I saw the first Friday the 13th, it kind of put me off the unsubtle “hack and slash” movies. I needed to see something extra, plot-wise or production-wise. “Evil Dead” sounded something like that, so I never saw it. Maybe I made a hasty evaluation.

I don’t know anything about Army of Darkness… never saw it, or really even heard of it.

I probably could have added “Scream,” as well, because I loved the combination of being both a horror movie, AND a satire of horror movies. Which is kind of like Cabin in the Woods. I love it when movies acknowledge the “movieness” of the whole thing.

Bradley Whitford being killed by the Mer-man he was so anxious to see, was a brilliant move… that and the whole underground “office” betting on the action. Absolutely loved it when Sigourney Weaver showed up. She’s so badass!

There's no shame in beckoning. I'm super behind on reading. Now even more so because we just got back from FL last night.

I like when movies acknowledge movieness, too. Did you see Tucker and Dale vs. Evil? I think you'll love that.

Never heard of that one either. Misty was right; you truly ARE the expert.

Hope you had fun in Florida!

How about one Spielberg's first: Duel. And any old Vincent Price movie will just creep me out. Theater of Blood or House on Haunted Hill.

As a kid, I grew up on Creature Features... old Boris Karloff and Bela Legosi movies about Dracula, Frankenstein, and the Wolfman. Nothing like staying up past your bedtime on a Friday night with Boris Karloff.

I know OF Duel, but I never saw it. Also never really saw any of the classic old horror movies... closest I ever saw was Young Frankenstein, and that doesn't really count.