I had lunch with Sitcom Kelly yesterday.  You may remember that she provided foster care for a little girl a couple years back, and she still sees her a few times a month.  The girl (who is about 5) was out to visit last weekend, and in the course of their adventures, she got herself a pine needle splinter in her finger.

Needless to say, there was much wailing and carrying on regarding Kelly trying to get the splinter out.  She said she was sure the neighbors must have thought she was performing a ritual killing.  It got to the point where she gave the girl the tweezers to let her try it herself.  I give her points for that, because when I was a kid, I always wished I was allowed to do it myself.

I still remember the age-old splinter battles of my youth.  Suffice to say, kids and grownups don’t see splinters the same way. 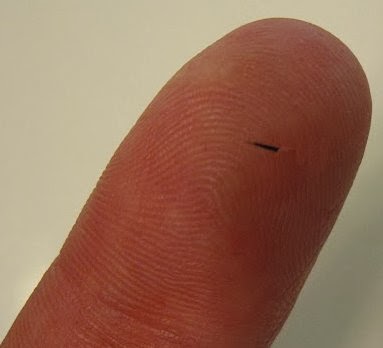 Now, here’s how a little kid sees a splinter: 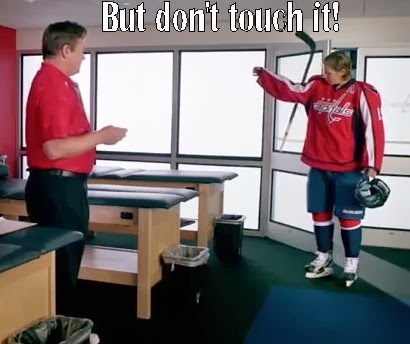 And here’s how a grownup sees a kid’s splinter: 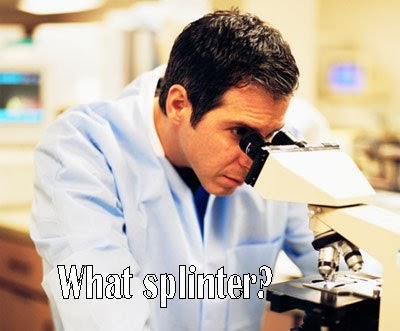 I quickly learned to rue the moment I got a splinter, because I knew my Dad would have to take it out.  And he didn't consider it “extrication” as much as “exploratory surgery,” with nothing but a straight-pin.

First, he had to run the end of the pin through the flame from a match, to “disinfect” it.  I think it was really to make sure I was properly terrified.  Then he’d use it to start digging around in my finger until he couldn't hold my hand down securely, from all my wiggling and howling.  After much crying and moaning and swearing and straining, he’d come up with the splinter on the end of the pin.  (Although a few times, I think he just pushed it down far enough so I couldn't see it anymore.)  Afterwards, he’d apply some alcohol… not to me, to himself, in the form of Jack Daniels.

I remember one evening, when we still lived in Pittsburgh, I got a splinter from playing around near this rough railroad tie-looking plank that bordered our garden.  I came in and we did the whole Splinter Removal Dance, which took about 20 minutes.  (Not including the Jack.)  I went back outside to continue what I was doing and immediately got another splinter.

That one didn't go over very well.  I think there was considerably less delicacy used in the second extraction, than there was with the first.  He might have even used an old corkscrew, I’m not sure.  I can’t say I blame him, but on the bright side, it was an early lesson wherein the little Bluzdude learned about the insanity of repeating the same action and expecting a different result.

Eventually, we managed to procure a pair of tweezers, so Dad could retire the straight-pin.  I’m not sure that was better, though, because often the splinter still had to be dug out, and the dullish edges of the tweezers were ineffective unless the nub was exposed.

Before long, I stopped telling anyone I had a splinter, and just went for the tweezers myself.  At least I could regulate how hard to push, and therefore the pain.  It’s hard to properly judge a kid’s actual pain when they scream before you even stick it in.

Like a lot of kids, I had a problem with needles.  I used to have to get allergy shots, which was always an ordeal.  I’d scream and howl and somehow, it never made any difference… I still got the shot.

Finally, Mom found an effective calming mechanism… bribery!  I had recently lost this little rubber change purse-thing… you know those things where you squeeze the sides and it opens up?  Well, I had one, I loved it, and I lost it.

Anyway, Mom said that if I didn't cry when I got my shot, she’d get me another one.  So when the doctor approached me, I just bit my lip, scrunched up my mouth, and took one for the change purse.

And that was another lesson, about how the fear of something is often worse than the actual event.  Once I knew I could do it, that was the end of my carrying on over needles, thank goodness.  (I totally should have held out for more stuff, but I wasn't that bright.)

But face it; if I hadn't gotten over all the crying and screaming, they would have stopped calling me in for blood donations long ago.

reading this makes me wonder why I waited so late in life to acquire a chainsaw. dad

Isn't it true that if you make a baking soda paste and put it on top of a splinter it'll draw it to the surface. I've never tried it, but always wondered if it's true.

Yesterday I pulled a tick off of Claire. I need that chainsaw for next time.

I bet that would have taught me to stop getting so many splinters… or at least reduce the surface area on my body to get them.

Ticks… [shivers] Those creep me right the heck out. I wouldn’t care if Dad had to use a melon-baller to scoop out the surrounding flesh… ‘Get it out!’

If you get one in your ass, you will quickly find out who your friends are.

Ain’t that the truth. Luckily, it never came to that with me. Or else I’m pretty sure it would still be in there.

Be optimistic. You never know.

I had a horrible aversion to needles as a kid. I remember it once took FOUR nurses in my doctor's office to hold me down while he gave me a shot. After years of bi-weekly allergy shots, I've become fairly desensitized to needles.

My sister once stapled her finger--on purpose. Don't ask me why. When she went crying to my father, he tried to pull it out, but she wailed even louder. She was afraid the ends of the staple had closed together, like they do on a sheet of paper. It took quite some convincing to show her that it was simply a matter of pulling out two straight ends of metal.

When it comes to pain, the anticipation is almost always worse than the reality... Remind me of that before my next dental procedure.

That makes perfect Kid Sense. Why wouldn't she think the ends would curl. Your dad should have thought to use one of those big toothed staple removers.