Who Ya Gonna Call?

Strange things are afoot at the Chateau de Bluz.

I’m not usually one to flip out over things that go [bump] in the night, but I’m a little wigged out by what happened Thursday night.  Let me tell you what happened…

First of all, I have to start by describing how the light works in my bedroom.  There is no overhead light, but the on/off switch at the door controls one electrical socket.  I have a lamp plugged into it that has an old-fashioned clicker-type switch.
As long as the lamp is switched on here, the on/off switch at the door controls the light.  It is the only way I've turned on the light in the bedroom for the fifteen years I've lived here.

So Thursday night, Pinky was staying at her house, so I had the place to myself.  Nothing out of the ordinary happened.  I wrote a post, watched the Penguins game, then went to bed.  I distinctly remember turning off the light by the door.

When I woke up Friday morning, I got out of bed and tottered over to the light switch to turn it on and… nothing.  I was like, “I know this worked last night.  And I have one of those new twisty compact fluorescent light bulbs in there… it couldn't have burned out yet, they’re supposed to last for years.”

I was wondering how I was supposed to pick out my clothes, because it was still dark out and my room has an almost tomb-like darkness to it.  (It’s great for sleeping!)  So I reached over and fumbled with the lamp switch, flipped it on, and voila!  The room lit up.  This was good.  But wait a minute…

How did the light switch get flipped off?

Seriously!  Pinky wasn't home, and when I asked her later, she obviously didn't come in the room, turn the light off, and then leave.

I didn't have anything to drink that night, and I don’t take any kind of drugs or sleep aids.  Also, I've never walked in my sleep in my life, as far as I know.  And if I did, you’d think I would go to the only light switch I've ever used in that room.

So how the bloody hell did that switch get flipped?  It’s not like it could do it by itself.  It’s rather clunky, and required a pretty firm force to flip it.  Did some burglar break in, leave all my electronics and stuff, but mess with my light switch just to fuck with me?

If it were ghosts, you’d think something would have happened here long ago.  I've been in this place a pretty long time.

There’s only one conclusion I can draw… 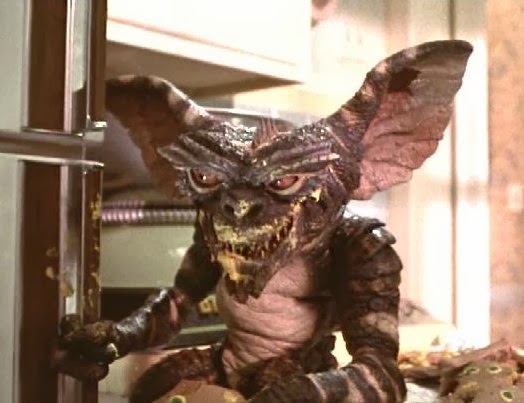 Any other theories?
Posted by bluzdude at 12:44 PM

I was going to say ambien until I read you don't take any sleep aids. I'm surprised you waited until today to post about it since you're a day early in your regular cycle and it's obviously bugging you. I wish I had an answer for you. I don't. It does seem plausible that you would have turned off the lamp manually instead of using the switch at the door. But it's weird you have no memory of doing so. Have you figured anything else since you posted this?

To tell the truth, I posted today instead of tomorrow because the last post has gotten no traction at all, so I thought it best to move on. Plus, Sunday is Steelers/Ravens day, so I'll be preoccupied.

No further answers has occurred to me, so I still don't know how the hell that switch got flipped.

Every now and again things like that happen around here. The hubby will ask if I moved something or left something somewhere. And we will argue about it for 10 minutes, both of us swearing that we did or did not do it. It probably happens about once maybe twice a year. If this were a regular occurrence, I am pretty sure I would be freaked out. In fact, now that I read your post, I will probably worry about it happening again.

Ah, but you guys have a youngster around. They move lots of stuff around in the course of a day.

I loved your L post but because I was late in reading it I decided not to comment on it. I delighted for about 12 hours on Thursday reading Politico and watching MSNBC, and then it sunk in that we're going to have another act in this never ending play come January. One of my FB friends put it aptly: If an arsonist sets fire to your house and then helps put out the fire, he's still an arsonist. I'm glad you posted about the D.C. situation and always look forward to your insights.

With my luck, he'd show up as Carl Spackler.

OK, I think I have an answer here.

A week or so ago, we had my bathroom shower resurfaced, which raises quite a strong smell. Pinky just remembered that she wanted to run the fan in the bedroom, but without the light, so she flicked it off on the lamp. (Because the fan was plugged into the same outlet.)

We think that when she flicked it back, it didn't go all the way into the locked position, so it fell back in to the 'on' position.

That's a much more believable solution, albeit much less cool.

I was going to suggest an Elf on the Shelf. I've heard those little devils get into quite a bit of mishcief. But . . . I guess the real way is more logical. No fun, but logical.

I might have also blamed my Steelers or Penguins gnome, but I know they wouldn't do me like that.