Thanks for the suggestions and encouragement.  The tally on directions you want me to go?

So basically, keep doing everything I’ve been doing.

I probably should have just embedded one of those survey thingies, but I didn’t feel like it.  Blame it on the malaise.

In fact, I think I’m going to blame every shortcoming on The Malaise.  Now if I can just find someone to blame it on and sue, I’d accomplish the modern American dream.

Anyway, something in the news piqued my interest this week.

Sure WalMart employees will have to work Thanksgiving DAY, (along with those from Target and many other big box stores), but management is going to provide a traditional Thanksgiving dinner for them at the store.

Talk about missing the point!

“Hey Wallies!  It’s not the turkey and mashed potatoes that people are upset about missing; it’s having the meal with their families and sharing some fellowship!  (And wine!)  I know you think of all your employees as one big happy family, but it’s not really the same, now, is it?” 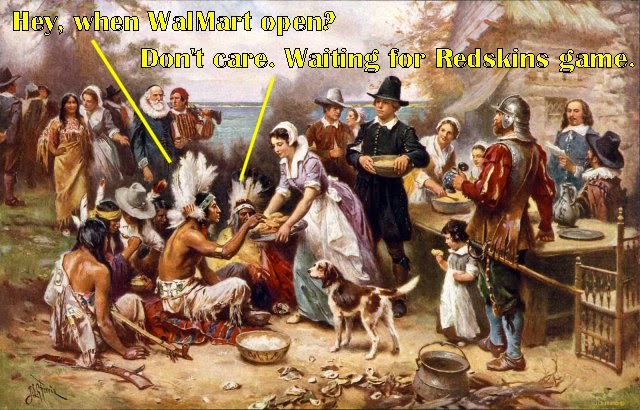 I say, if they really want to provide a “traditional Thanksgiving meal,” then go whole hog.  Let everyone pull the demo recliners up to the flat screen TV display, put on the football game, and fall asleep with their belts undone and their hands in their pants.

OK, that’s probably just for the sports fans.  Everyone else should get to go shop at Target.

But seriously, I hate that Thanksgiving has been getting chipped away by the ever-encroaching business of Christmas.  Or more specifically, Christmas shopping.  These big businesses don’t care a lick about their employees, no matter what their press releases say.  The only thing that matters is the pursuit of increasing revenues.  But that’s what big business does… it’s their only reason for existence.  Increase profits… lower costs… continue.  You can’t blame the snake for acting like a snake.

I’ve seen petitions going around on the matter, but they’re not going to accomplish diddly-squat.  The only way this trend gets rolled back is if people stop going out to shop on Thanksgiving, period.  Once opening on Thanksgiving becomes unprofitable, they will stop, and not a moment before.

I’m not optimistic.  There should be a point where a good deal on electronics costs too much in human collateral damage.  But I don’t think we will ever see it.

Regardless, I’ll be staying home for Thanksgiving.  No shopping for me… not at night, not during the day, not any time.  (And that has nothing to do with the fact that the Steelers and Ratbirds are playing that night.  I haven’t been out on Thanksgiving or even Black Friday, since I still worked in a record store.)

Of course, I’ll be hitting Cyber Monday like a Big Dog…
Posted by bluzdude at 7:02 PM

I'm going to preface this by saying I hate that stores are opening on Thanksgiving.

Like you said, the stores wouldn't be opening if the shoppers weren't there. Most places first look for volunteers to work and some offer incentive pay. I worked retail for ten long years and I remember missing a lot of holidays because I had to work. What I hated the most were the people that would comment "Oh, it's such a shame that you have to work today!" I always politely replied "Well as long as people have to come out and get (whatever that person bought), someone has to be here to take care of them. Have a nice holiday!"

I spent over 10 years working in and managing record stores and I'll tell you, the main thing that Thanksgiving and Christmas meant to me was that I finally got a day off, and got to just breathe. It takes a cold heart to take that away from so many people.

I have subscribed to bfads.net for a few years and find it so useful to look at the ads and things that can be purchased online on the cheap. I would much rather pay a little more and shipping if I have to and avoid crowds. I do like Small Business Saturday although I can't remember actually participating in it. That would require me to go out shopping which I hate to do.

I do all my gift shopping online, pretty much ever since I got a computer. I literally can't remember the last time I was in a mall. It's probably backlash from working in them...

Costco is giving their employees the day off with pay and a turkey. I still remember when stores closed on Sundays because yes, I am that old.

The grocery store where I worked for my first job was closed on Sundays, but that was it, as far as I can remember. But Thanksgiving, Christmas, New Years, etc, should be off limits.

I wish it would all hold off until Cyber Monday. I've seen one of those memes that says something along the lines of "America: the only place where you mow people over to buy things the day after you spending time being thankful for what you have. It's ridiculous and there is no way you'll be able to get me far away enough from the pie to even think about shopping on Thanksgiving.

I won’t even go out on Black Friday… to much latent scarring from my retail days. But these employers know that they can treat the employees any way they want, because there are hundreds of other people who would instantly fill the job.

Just to note . . . "odd stuff" was to be "purveyer of the absurd." I just couldn't remember what you called it and was too lazy to scroll up. Apparently, nobody is immune to malaise.

I have once in my entire life shopped on Black Friday. Waking before dawn as a young 20-somethinger to go to Walmart with my parents to deal with that insanity was the first and last time I ever lost my damn fool mind in that way. Not worth it AT ALL. My hubs' family all goes out Thursday night after getting their fill of bird, to get a jump on the deals. It used to be early Friday morning until they started opening at midnight and now early evening. I imagine they will be there whenever they open on Thursday. We many not even see them.

But I agree with Cyber Monday. Bring it on.

The way they keep bumping the “opening bell,” pretty soon it’s going to be like my favorite line from Monty Python’s “Four Yorkshiremen” sketch, where they’re all talking about how hard they had it, growing up:

I used to get up in the morning at 10 o’clock at night, a half an hour before I went to bed…”