Speaking of bombshells, (see the prior post) a bomb went off in Washington today as the Senate enacted the so-called “Nuclear Option” to curtail the rampant use of filibusters on judicial and cabinet nominees.  Filibusters will still be in play for bills and Supreme Court nominations.

You may recall that over the last couple of years, there has been talk of enacting these reforms, usually when the GOP is holding up more nominations than usual.  In fact, Senate Majority Leader Harry Reid was close to going nuclear before Mitch McConnell agreed to ease off on the filibusters, so to get a little of The People’s business done.

Unfortunately, that promise turned out to be hollow, as the obstructionism continued, well, unobstructed.  At the moment, they are holding up 3 judicial nominations to the US Court of Appeals right now, essentially to maintain the conservative tilt that it currently on the bench.

I wrote about it at the time, expressing my worry, because I feared that when the Republicans eventually reclaim control of the Senate, they will have no such qualms about taking the filibuster away from the Democrats.  And it that’s the case, the Democrats might as well see some of the benefits first before they inevitably get screwed when they become the minority.

It’s sad that such a venerated Senate tradition had to fall by the wayside, but it was being used in a manner that was worlds away from its original intent.  From 2006 to the end of 2012, the Republicans have put forth 380 filibusters.  (They no longer have to go up to the podium and speak for long period of time… all they really have to do now is say, “I call filibuster!” and the bill or nominee is held up.) 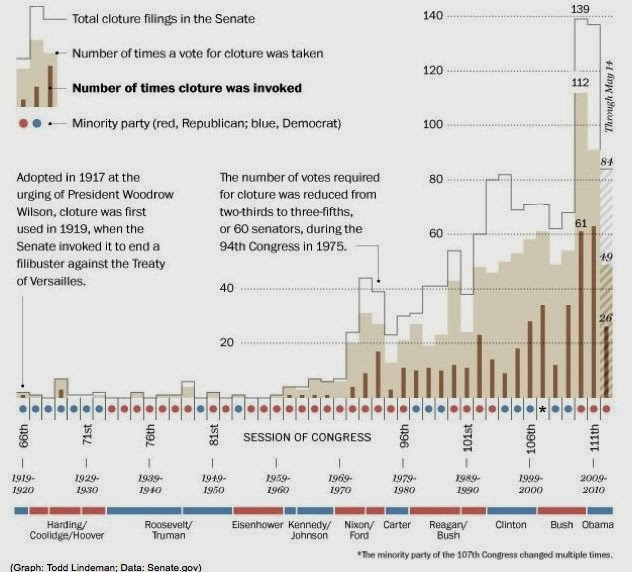 “Cloture” is a vote that is called to end a filibuster.

For contrast, Lyndon Johnson faced one filibuster during his entire term.

This is why we can’t have nice things.

I think if they’re going to have filibusters at all, I think they should at least have to go up and hold the floor.  Even better would be to have them go through an increasing series of twists, as if it were a “Survivor” competition.

Say, the Senator starts off by merely speaking.  Then after a couple of hours, the start a cold rain machine on him.  An hour later, they kick on the giant fan, and so forth until the speaker gives up or the vote him off the island.  That would certainly make CSPAN more entertaining.

That’s a joke, of course, but then so is the current process, where a minority of Senators can hold the rest of the Body hostage and indirectly nullify the results of the last two elections.  The Senate’s approval role is supposed to be “advise and consent,” not dictate at gunpoint.  “Put in a guy that shills for US, or the country gets it.”

Part of winning the presidency is getting to appoint the judges and cabinet members you want.  That right is mixed into the stew when we’re voting (or at least it should be).  Seeing people with whom you disagree put into these positions is the cost of losing the election.  That the minority side should insist that the President appoint people who believe the exact opposite of what The People voted for, is blatantly un-American.

But then, the GOP only believes in “America” when they’re on the campaign trail.  And they believe in Americans even less.

Unless, of course, they’re white, male, Christian and well off.
Posted by bluzdude at 7:36 PM